Zakhar Prilepin: 12 points about the Revolution and the Civil War 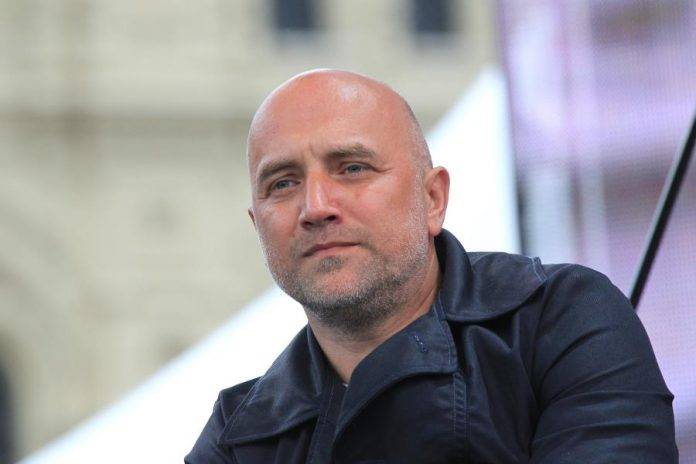 Arguing about the revolution, its opponents walk in the same circle, carefully reproducing the same, in our opinion, erroneous arguments.

1. Even if you are very fond of the monarchy, you must somehow accept the simple fact that the Bolsheviks did not overthrow the tsar. The Bolsheviks overthrew the liberal-zapadnicheskoe Provisional Government.

2. The fight against the Bolsheviks was not started by the people who fought for “Faith, Tsar and Fatherland,” but rather Lavr Kornilov, the general who announced the arrest of the empress and the royal family.

Among his closest associates was Boris Savinkov - Social Revolutionary, a revolutionary, a terrorist who did everything to overthrow the monarchy. Savinkov tried to save the Provisional Government in the Winter. He served as commissar of the Provisional Government in the detachment of General Peter Krasnov. Engaged in the formation of the Volunteer Army.

Another prominent figure in the White movement, General Mikhail Alekseev, was also involved in the removal of Nicholas II from power; in addition, like many leaders of the Provisional Government, Alekseev entered the Masonic Lodge.

The question is, in fact, one. People who oppose the Bolsheviks and Lenin really believe that Russia would be better if it were ruled by liberals, revolutionaries who practiced terrorist methods, and generals who had changed their oath during the entire XX century?

3. All supporters of the idea that the revolution was committed with German and British money should somehow explain to themselves for the beginning whether the first and the second got the desired benefit, for what purpose both the first and the second participated in the intervention against Soviet Russia, if the Bolsheviks were their agents, and what kind of agents are they who throw their curators, so to speak, and then fight with them not for life, but for death?

4. Bearing in mind that part of the aristocracy, was expelled from Russia, instead of which came, as others like to say, “cooks and bandits”, you should be aware that Lenin was also a nobleman, as well as many prominent Bolshevik leaders and leaders party. Krestinsky N.N. - from noblemen, Kuibyshev V. V. - hereditary nobleman, Ordzhonikidze G. K. - nobleman, Dzerzhinsky F. E. - son of a small local nobleman, one of the most prominent figures of the NKVD - Boky G. I. - from an old noble family, real son State Councilor; and so on. It does not prevent us from remembering that noble blood flowed in the veins of not only the writers who left Russia in the person of Merezhkovsky, Berdyaev, Boris Zaitsev. The bloc and the Bryusov who adopted the revolution in Russia were the same nobles. Furious revolutionary poets Mayakovsky and Anatoly Mariengof - do not believe it, also from the nobility. Alexey Nikolaevich Tolstoy was a nobleman, and Valentin Petrovich Kataev was also a nobleman.

In this place, it is worth mentioning that there was one (1) Jew in the first Soviet government. Trotsky.

5. In the Red Army, 75 thousand former officers served (of which 62 thousand were of noble origin), while in the White Army about 35 thousand of the 150 thousandth corps of officers of the Russian Empire. The habit of the newest Russian cinema (however, borrowed from the directors of the Soviet era) to portray the Red Guards as people from the people, and the White Guards as “white bone” is vulgar and even unnatural with historical points of view.

Returning to Trotsky and a number of revolutionaries from the Pale, it is worth noting the following. All those who claim that revolution is the work of ethnically colored groups that manipulated the Russian people are, in fact, in the role of Russophobes. In particular, for the elementary reason that tens of thousands of Russian noblemen, and officers, are considered, are objects of manipulation of several hundred descendants of artisans and shopkeepers.

Recall that the post of Commander-in-Chief of all the Armed Forces of the Soviet Republic was held by Sergey Sergeyevich Kamenev - a career officer, graduated from the General Staff Academy in 1907, the colonel of the Imperial Army. From July 1919 of the year to the end of the Civil War, he held the post that Stalin would occupy during the years of the Great Patriotic War.

Do you still want to talk about how the cooks and gray-eyed gangsters defeated the white-faced and beautiful Russian noblemen, who did not change their oath and loyal to the emperor, by deceit and cheek?

6. The Bolsheviks did not arrange the Civil War and did not need this war. It did not begin immediately after the Revolution, as it is sometimes believed, but only in the 1918 year, and the Bolsheviks had nothing to do with unleashing it. The initiators of the Civil War were military leaders who overthrew the king. As a result, millions of people participated in the Civil War - representatives of various ethnic groups, political groups, forces; In addition, it must be remembered that fourteen (14!) countries intervened - and in such a situation, blame the victims of the Civil War on the Bolsheviks alone - utter game and outright manipulation.

In fact: the civil war was staged - white.

7. The first laws that were adopted by the Bolsheviks who came to power were not repressive in nature. November 2 The 1917 of the Year adopted a declaration on the rights of the peoples of Russia, abolishing all national and national-religious privileges. November 11 adopted a decree on the abolition of estates, ranks and the establishment of a single citizenship. December 18 adopted a decree on the equality of women in a civil marriage. The Bolsheviks came to power as unprecedented idealists, liberators of the people and in the best sense of the word, democrats.

8. Faced with the possibility of the collapse of the empire and the separatist movements in the national suburbs, the Bolsheviks immediately changed tactics and rapidly assembled the empire, ultimately losing only Finland and Poland, which are still irrelevant and excessive in Russia. With all their desire, the Bolsheviks could not be called "destroyers of the empire" - they just called their offensive campaigns "international", but the result of these campaigns was the traditional Russian "increment of land."

A number of preferences that were received by national subjects from the Bolsheviks should be perceived in the context of the situation (First World, Civil, arranged, I repeat, not by the Bolsheviks, parade of sovereignties, intervention, etc.). To consider these things outside the historical context is not constructive.

Nothing but disgust can cause the behavior of the current liberal public, in fact, disbanded the Russian empire in the Soviet charm - and accusing the Bolsheviks of this disintegration. Those Bolsheviks who fought in the most heroic way for the national outskirts that were lost in the 90-ies as a result of the liberal-bourgeois revolution without a single shot.

9. One of the most frequently reproduced by both liberals and nationalists is the argument that the Bolsheviks “planted a bomb” under the empire, dividing Russia into republics, takes the historical conversation to some airless space: an absolutely meaningless picture turns out - the empire lies for itself, the Bolsheviks and put a bomb, then to blow up their own state.

Meanwhile, imperial Russia was no longer there, the emperor left power, and the Provisional Government came to power. Question one: would it be better if the February generals won the Civil War?

No, they all knew about the Anglo-French agreement from 23 December 1917 of the year - about the division of zones of influence in Russia: Great Britain received the North Caucasus, France - Ukraine, Crimea and Bessarabia, the United States and Japan divided Siberia and the Far East.

Let's lay out the cards again. No king - this time. There are white generals who were generally ready for the above-mentioned alignment and cutting the country — these are two. And there are Bolsheviks who opposed this alignment and sawing.

"Were the bomb planted?"

The processes of disintegration began in the Russian Empire under the Provisional Government - in Poland, Finland, in the Ukraine, in the Baltic territories - was the Russian empire divided into Soviet republics?

Those empires that fell apart before the Russian and after it - were divided into Soviet republics? Why did they break up then? Who put the bomb under them?

The Democrats in the 90s were very fond of talking about this “bomb”, the message of these statements is obvious: they didn’t want to be guilty of decay, they wanted to blame others.

Grand Duke Alexander Mikhailovich Romanov said: “The position of the leaders of the White movement has become impossible. On the one hand, pretending that they did not notice the intrigues of the allies, they called ... for a holy struggle against the Soviets, on the other hand, the guardian of Russian national interests was none other than the internationalist Lenin, who in his regular speeches did not spare the forces to protest the partition of the former Russian empire. "

Who do you trust more? Grand Duke Romanov or Democrats 90's?

But after all, Patriarch Tikhon and the White movement did not bless, did not accept.

And who support? There is no king, he has otrёksya. The white movement shares Russia with the Japanese and the French.

Let us proceed from this point and operate with reality, and not with Manilov's ideas about how it would be better if there were no Bolsheviks at all.

11. The main conflict of the Civil War is not the battle of the “cooks and bandits” with the aristocrats of the spirit. The Bolsheviks nationalized the industry — most of all they infringed upon the interests of big capital, preferring the interests of the working people. Most of all, the Russian Forbes list, and those foreign financial players that had their interests in Russia, were interested in the Civil War, figuratively speaking. It was a conflict of socialism and capitalism, to put it simply.

Nowadays, this simplest essence is constantly being tried to be replaced by songs about Lieutenant Golitsyn and walking with a portrait of the last emperor.

12. In the Civil War, first of all, the Russian people won. The Russian revolution that happened on 7 on November 1917 of the year is both a merit, a victory, and a tragedy of the Russian people. He bears full responsibility for her, and he has the right to be proud of this great accomplishment that has changed the fate of humanity.

Ctrl Enter
Noticed a mistake Highlight text and press. Ctrl + Enter
We are
“On a country without statehood, revenge and a new national idea of ​​Ukrainians.” - Answer to Zakhar PrilepinRussian revolution: the debunking of myths and nontrivial view
121 comment
Information
Dear reader, to leave comments on the publication, you must to register.