... and to all here "
Ksenia Anatolievna Sobchak 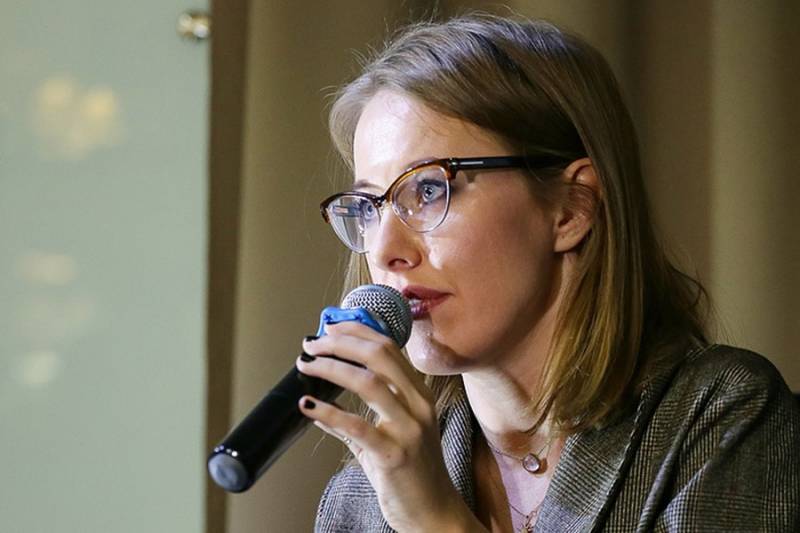 Still, we have a wonderful opposition: liberal, self-critical, spiritual and always keeps its nose strictly in the wind with which it siphon because of the “sea-okeyan”! As soon as there - on the island, beyond the “sea-okiyan” - they fully realized that Russia is no longer a boy to call on the carpet and to read morals, and immediately “whistled up” all its resources (from controlled media to obedient direct and shameless violation of all treaties and agreements), so immediately our, lovingly brought up in the dashing post-perestroika years, the opposition bit the bit and rushed uncontrollably and recklessly, like a three-bird. Particularly colorful in this troika are the look-after ones (Gozman and Sytin unwittingly come to mind) - they also gracefully twist their heads to one side, drill their opponent’s eyes angrily and angrily, and at the same time look piercingly at a straight road to the bright future of Russia in the Western style. A painting worthy of the brush of a horse painter is a sight for sore eyes! But the three would not be a three, do not be in it a native stallion. I would like to speculate and express my opinion about this stallion (or mare - a matter of taste and possibilities).

The words of Ksenia Sobchak cited as an epigraph in an interview with journalist Yuri Dudiu, in which she defined herself and, therefore, her associates, finally gave me some clue as to what was going on in our internal political field! Thank you Xenia. Now I understand the whole madhouse and farce into which our liberal public is trying hard to turn the Russian media space with various absurd and provocative statements, demarches in the form of statements about their presidential ambitions and flirting with Russian youth. And they are not embarrassed by the fact that a person with an outstanding criminal record is being pushed to the presidency, and they are not embarrassed by statements about the policy of the state’s leadership for the benefit of the country that contradict the facts and do not embarrass insulting remarks about the citizens of Russia, for which one must foolishly justify trying to keep face face "!

And, you know - do not bother! And this is because their main task is to dilute public opinion. Their task, like termites, is to pierce holes and holes in the integrity of Russia's assessments of the country's success in many aspects, so that what has suffered through the dashing 90 and collapsed from 2000 collapsed. Their task is to make the pride of our people — our Army — turn back into a gathering of embarrassed by uncertainty, embittered by the needs of people in the shape of a country that was recently kicked off by those who are now watching with fear how it is growing and developing.

And everything would be fine, you can just try not to pay attention to all this clowning, if these buffoons, cut off from impunity, didn’t bury themselves too much, to the extent that they began to put forward conditions. Not so long ago, the above-mentioned "root" stated:

... Previously announced the intention to run for president Ksenia Sobchak announced that she would withdraw her candidacy if Navalny was registered as a candidate in the presidential election 2018 of the year ....

And this is all stated despite the fact that Mr. Navalny has an outstanding conviction and Ksyusha cannot be unaware of this. The question arises - who dictates Xenia this condition - the electoral law, the government of the country or us - the citizens of the country? It turns out that the "rabble" is trying to rewrite the rules of life and adjust them for themselves. We see this practice in the actions of our political "partners" who tirelessly rewrite the rules of everyone and everything for themselves - exceptional. Consequently, the conclusion suggests itself: who is who - our liberal and non-indistinguishable opposition, which calls itself a rabble. As they say - the apple from the apple tree does not fall far. In this case, instead of an apple and an apple tree, Xenia suggests that we use the word "rabble." I agree with Ksenin’s definition, especially considering the wildest discrepancies between her words and her actions (her interview where she says she doesn’t drink alcohol and the widely sold video, where she is drunk into unconsciousness and dragged into her bedroom - you are help, reader), but I do not agree that the rabble dictates its conditions to me! And, therefore, they have the right to expect that those on whom the impeccable holding of the upcoming elections depends will not disregard the attempt of the “scum” to slap the ordinary citizens of our state and, thereby, show respect for them.

Ctrl Enter
Noticed oshЫbku Highlight text and press. Ctrl + Enter
We are
Is Putin preparing a "devaluation" of the presidential election?What you didn't want to know about England
Military Reviewin Yandex News
Military Reviewin Google News
117 comments
Information
Dear reader, to leave comments on the publication, you must to register.