November 10 2017
63
The other day, “presidential candidate” Ksyusha Sobchak gave an interview to CNN, which in itself made a lot of noise. The main wave of indignation rose after Sobchak once again declared that the Crimea - "this is Ukraine", and that it supports the imposed anti-Russian sanctions. That was enough for the already “baseboard” rating of “lady against all” to break through the floor. However, judging by the numerous comments, in our country, they did not catch the interesting thought bit in the statement, or openly ignored it. It is understandable - the figure of the “candidate” is too scandalous and too much heresy has already managed to be applied from the screens by this lady in order to treat her particular utterances.


But here the case, as they say, is delicate.

Firstly, the interview is not for the Russian “consumption”, even if it is super-liberal, but first of all for the American one. After all, it was given not to “Rain”, not “Medusa” and not “Echo”, but CNN. And this means that CNN has an order to probe the extravagant Russian “presidential candidate”, given the fact that this American television channel does not work without orders from “above” in principle.

Secondly, the interview was about the resource, with the help of which Washington tried and is still trying to bring Russia frankly to its knees - about sanctions. So, the question here is not even about who was talking about sanctions for the American audience, but about the effectiveness of sanctions as such.

Recall that in an interview said Sobchak:
I support these sanctions. Another thing is that, for example, now students in Russia cannot get an American visa, this is unfair to them, because why should the Russian people be punished for the policies of a person whom they don’t support.
In other words, Sobchak, as it were, sends a collective-liberal message there — across the ocean. They say, brothers, for three years you make mistakes by repeating them from time to time when you take regular sanctions packages against Russia. Enter the sanctions, but at the same time these sanctions are such that except that students who go to the United States, and act ... The Russian authorities, they say, your sanctions do not apply.

And the leading "party personnel" of the United States did not even guess about this? Oh, come on ... The flag was lifted - sanctions, a hole in the ceiling of the consulate was punched - sanctions, long loans were issued to Russian banks as it were banned - also sanctions, gas, they say, buy from us, but do not buy from Russian - again sanctions. But this is the case: the flag was returned back, a hole in the ceiling was repaired, Russian banks take long credits where the Big Brother’s arms do not reach out for all their length, and American tankers, registered in offshore, are pumped gas in Russia, then to realize Europe market. Plus - the situation with coal, plus - the strangeness of sanctions against the Russian "defense industry", after which this very "defense industry" in the order book for the third year in a row holds record figures.

It may be recalled how the American sanctioned car grated in the direction of the German business, which was in contact and in contact with Russia. Under the distribution got "Siemens", who sold gas turbines for thermal power plants of Russia through their own Russian representative office. Turbines "landed" in the Crimea. Oh, the horror ... Russia put its turbines (and they became Russian after the purchase, which took place in full compliance with international trade standards) on the "occupied" peninsula! Horror! .. Nightmare! .. In the USA they said that they would either “split Siemens” into atoms, or incinerate, or both, three times. The Germans began to fuss - courts, arbitrations, lawsuits, squeaks, screeches - in general, they worked as expected ... Arbitration - to Germans: Friends, do not need to squeal, everything is fine - you didn’t break anything. And immediately passed news that the American “gas turbine” company is trying to occupy the “Siemens” niche in Russia.

The Germans scratched their heads and began to assure the Ministry of Energy that they, of course, fully share the Western sanctions policy towards Russia, which, like Sobchak, consider Crimea to be Ukrainian, which will never, ever, violate all energy packages, combined, but at the same time from the Russian market will not go anywhere. For not for more than a century in the Russian segment of their activities invested.

From the statement of the Deputy Minister of Energy of Russia Andrei Cherezov:
Siemens is considering the possibility of supplying high-power gas turbines to Russian thermal power plants. Including TPP on Taman. We know that they have an interest in this. I must say that other companies offer us the same turbines. For example, the American General Electric, under certain conditions, offers an even cheaper option with the same power.

In general, the Germans in the Russian government made it clear: sanctions against Russia are more than specific.

Those who are more hypocritical have long since learned to support sanctions so that they did not stay at a loss, and even vice versa - increased trade and economic contacts with the Russian Federation. Those who are even more savvy - the sanctions did not initially support, putting the "hegemon" itself in an awkward position and making it clear that the rows of the "hegemon" are not monolithic and even there they have someone to lean on or to whom at least whisper in their ear. Thus, on the Promised Land, sanctions were imposed, for any pressure would immediately be declared fierce anti-Semitism. But father on sanctions also put something like that, after which the seas, full of "salmon" and shrimps self-formed in the republic. Yes, and the “hegemon” itself, as it turns out now, is not averse to reluctant on sanctions, for the wrong scale of the US-Russian trade was initially to bring Russia to their knees, plus - if there are those who refuse to trade with Russia not going a priori.

The special piquancy of the anti-Russian sanctions policy is added by the fact that oil prices are actively creeping up. Although the word "crawled" is not quite correct. Prices have risen clearly above the forecast bar, which gave the American blogosphere a reason to come up with headlines in the style of “Putin survived cheap oil.” And some sarcastically add: "Putin survived, but our (American) shalers did not survive." 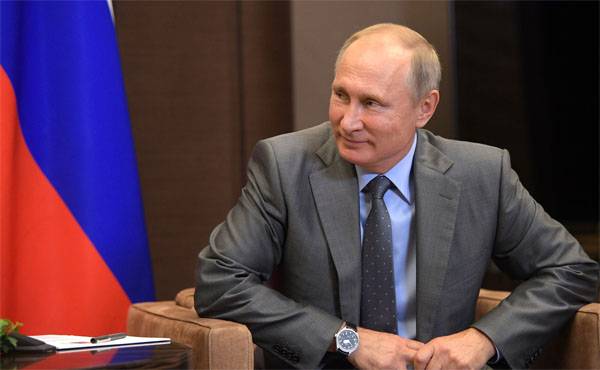 Indeed, at a price higher than 60 dollars per barrel, the profitability of American shale production is again actualized, but in the USA it is noted that the recovery process in the shale industry is proceeding at a very unintelligible pace. Waiting for confirmation that no one will “sink” the barrel anymore, which means they are ready to sign that the policy of “sinking the price of oil” did not work this time. But it didn’t work at all, not because the methods were “unfit”, but because Russia today is still not a USSR agonizing pore. It was necessary then to start cutting rockets and sawing planes, withdrawing troops where possible, “the partners” realized that it was possible to collude with the fall in oil prices in order to “help” the Soviet Union to collapse. Now - otherwise. The Syrian party has shown that it is much more difficult for the “partners” to enter into collusion when the Russian military might actually change the strategic position in the whole macroregion, and clearly not in favor of those who originally started the next “color” sabbath with all the consequences. And, I must pay tribute, it was President Vladimir Putin who built and played out the Syrian party since 2015, just as few have expected even in Russia itself. And cheap oil really “survived”. Some "did not worry" ... along with the country ...

In general, in the USA there are not so many people who continue to see as an anti-Russian panacea those sanctions that are still in effect. Is that the elderly Washington "politburo" with McCain and other adherents at the head of the sanctions have become like a pill for evening headache. Swallowed - and convinced themselves that the "health".

Ctrl Enter
Noticed oshЫbku Highlight text and press. Ctrl + Enter
We are
Situational analysis of the death of the MH17 flight (Malaysian Boeing 777), made on the basis of engineering analysis from 15.08.2014Results of the week. "God forbid to see Russian revolt, senseless and merciless!"
63 comments
Information
Dear reader, to leave comments on the publication, you must to register.