November 9 2017
19
The American Ticonderoga cruiser has become the foremost ship of the American fleet. According to navaltoday.com, the U.S. Navy tested the Aegis baseeline 9 system on a thirty-year USS Mobile Bay ship.


Last year, the cruiser USS Mobile Bay was sent to finalize its combat system Aegis - the previous version (baseeline 8) was updated to the latest baseeline 9. 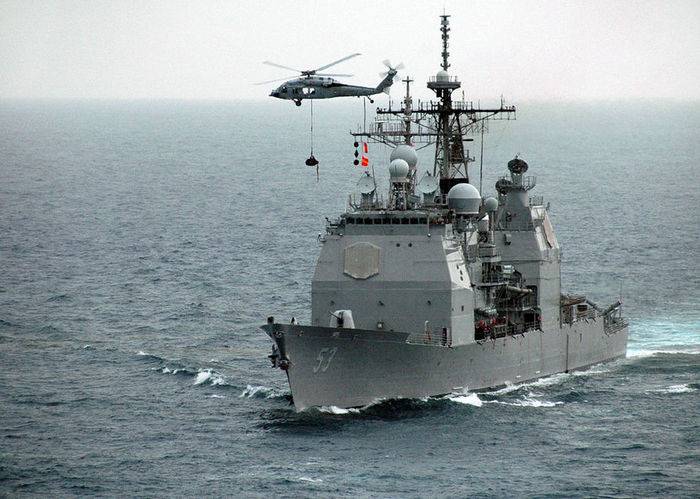 During testing, two SM-2 anti-aircraft missiles and one anti-ship ESSM were launched from the cruiser. According to the press service of the US Navy, the testing tasks were successfully completed, the capabilities of the updated fire control system, as well as “some new functions” were confirmed.

Aegis is an American naval multipurpose combat information and control system, which is an integrated network of means of control, control and destruction. The system allows you to receive and process information from sensors of other ships and aircraft, passing the coordinates of targets to their launchers. Today, the Aegis is used by the naval forces of the United States, Spain, Norway, the Republic of Korea, Australia and Japan (in total, it has more than 100 ships equipped).

USS Mobile Bay is the seventh ship in a series of 27 Ticonderoga-type missile cruisers built for the US Navy. Cruisers of this type were the first ships in the US fleet equipped with the Aegis system. Mobile Bay was laid in the summer of 1984 of the year; it was accepted into the US Navy on February 21 of the year. Ticonderoga-type cruisers are armed with Tomahawk cruise missiles, ASROC anti-submarine missiles, and SM-1987 and SM-2 anti-aircraft missiles. The total displacement of ships of this type is 3 t, length - 9800 m, width - 172 m, transmits "Warspot"