November 7 2017
163
In one of the works, whose authorship is attributed to Nikolai Bukharin, it is said that just a few days after the revolutionary events of October 1917 in Petrograd, the group from the top of the Bolsheviks seriously and with obvious apprehension considered the days "before a possible counter-revolution". The reasons for such concerns in November-December 1917 of the year were several factors, including the impossibility of promptly notifying the residents of the country's regions about the coming to power of the “workers and peasants party” and the impossibility of mass announcement of the party program, which the local masses could actively support .


The Bolsheviks feared that the regional “old-regime” authorities would raise the people to revolt against the emerging governing element of the new country - the Land of the Soviets - and the people would sweep away those against whom the statements were repeatedly made as about the incarnations of the German conspiracy against Russia. In principle, the situation completely boiled down to this - during the civil war. However, the victories of the counter-revolution, which the revolutionaries feared, did not happen. The Soviet state was eventually formed. On the incarnation or non-incarnation of German interests after October - the question is still open.

And after the death of Nikolai Bukharin (after the development of the case of the so-called “Anti-Soviet Protro the Cyclist Bloc”), as a result of the execution of the death sentence in 1938, it was unlikely that anyone in the top of the Bolshevik Party would think that in just half a century or so small revolutionary jubilees will become history, and that 1917 events will be subject to serious evaluations. And it is not even about the so-called liberal revaluation, for which any destructive is declared positive if this destructiveness concerns life in Russia. It is about evaluation in a broader sense of the word.

Today, on the day of the 100 anniversary of the October Revolution, which for a long time wore the official name of "Great", it would be strange not to remember the anniversary. It would be strange to try to dismiss the fact that in the history of our state there were also such periods of history as the statehood itself was in fact put in great doubt. It was not just questioned, but, as in the case of October 1917, it really ceased to exist. Temporarily ... And it could well have been forever, taking into account both the very prerequisites of the coming to power of the Bolsheviks, and the first revolutionary fruits with territorial and administrative "questions".
Revolution ... How much has been said about it. How many volumes are written. How many physiognomies are full. How much, how much, how much ... In general, the 100 revolution of years. And what blows from this word, from this event today - exactly a century after that milestone in the history of the state? 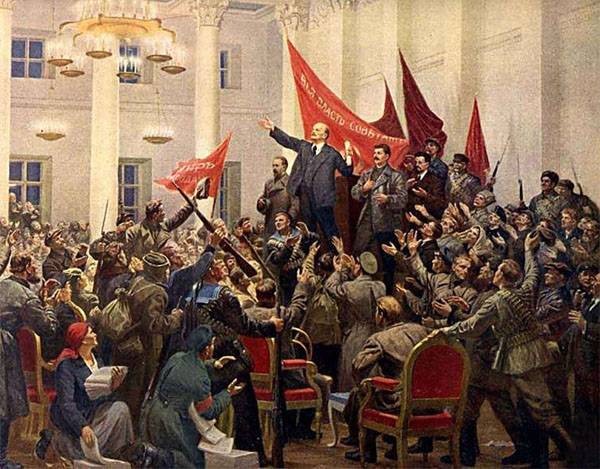 It is always interesting to see how the “Russian revolution” —the great and terrible — is attempted to be presented to us (the citizens of Russia) by “friends of Russia” from abroad. Especially from the country that had, to put it mildly, not the last relation to what happened in Petrograd in October of the seventeenth.

So, the other day on the site of a German radio station Deutsche Welle Appeared material of the columnist of this German media Miodrag Zorich. Mr. Zorich is being killed about the fact that today's Russians are so “dark” that, you see, they cannot “look at the historical truth in the eyes”. So Zorich himself apparently looked the way he correctly understood - a representative of the Balkan people is now working for the German media and writing materials about the “wrong” Russians, berating Putin and Stalin. Well, the trend is the same ...

The material of Zorich has the following name: “Vladimir Putin and the October Revolution. Is there a proper handling of history? ”Here are some quotes from the material that we, Russians, say,“ can’t continue to live like this ”, that you need to“ repent ”without fail and rethink everything so that you like Zorich, Deutsche Vella and everything progressive West.

Marxism-Leninism became opium for the people. He justified murder, robbery and many crimes in the name of ideology.
Communist leaders destroyed the normal life of many generations. They killed millions of people and staged the largest persecution of Christians in history.

And after years of 100, the Kremlin continues to spread false information about the October Revolution, because Lenin, Trotsky and Stalin were no patriots. It is hoped that future generations of Russians have the courage to look at the historical truth in the eyes.

It is important to note that the material on the Deutsche Welle pages is presented as “Recommended by the editors”.

Dear Comrades from Deutsche Welle. What do you say? You know the Russian soul so badly that you cannot understand one thing - if you persistently demand “repentance” and “face the truth”, we are indeed able to unite even against the background of such a controversial event as the October Revolution and its centenary anniversary. We in Russia can break spears for years with respect to the positive or negative personalities of Lenin or Stalin mentioned by you, but as soon as a certain collective “Zorich” appears, the personality of the times when the Bolsheviks became the authorities will fade into the background in any relation to them. The focus is on your attempts to teach us the “right” attitude to your own history.

And we, excuse me, do not like when we are trying to present our history under German, French, American, pseudo-Balkan and other foreign sauce. And even more we don’t like it when from the country supporting the coup of 1991 of the year in the USSR, the Maidan of 2014 of the year in Ukraine heard statements about our “need” to comprehend all the horrors of the October revolution of 1917 of the year ... This is actually the peak of duplicity - to support the oligarchic unconstitutional coup in Kiev, kiss the sugar lips of Poroshenko and immediately try to declare that Lenin and Stalin were not patriots. And who is a patriot? - Merkel, who spread the carpet in front of millions of refugees, including thousands of identified terrorists blowing up Europe today? .. Gorbachev, asking ... (that is, losing) a huge country on pseudo-slogans about restructuring and freedom and leading a huge civilization space to blood and chaos? Poroshenko, who continues to throw new and new victims into the mouth of the civil war? .. You are already there with your position to begin to decide in order to advise Russia "to develop a" due "attitude to historical retrospective."

What is the attitude of the Russians to the date? Yes, it is contradictory. Yes, it has boiling points. But the main thing is that this is a story, our common history. You can spit on the portraits of Lenin and Stalin, you can go with them along the street with a red ribbon on the lapel. You can admire the revolution or mourn its victims. You can call the Bolshevik revolutionaries angels, you can - demons. Is it bad? Is it bad that every person in Russia has his own attitude to the revolutionary upheavals 100 years ago, and this attitude remains inside each of us. This attitude we are all free to share with each other. Listen to arguments, defend your position. Is not it a democracy? Isn't that freedom of expression? The bad thing is that there are people who are trying to openly impose, average, and humble themselves the attitude towards history. Moreover, there are many who use such defamation for the sole purpose of trying to deprive Russia of unity in diversity, presenting their position as a “new good”.

That is why it is important not to engage in historical picking and flagellation, but to recognize simple things. The October revolution in history was - this time. Since then, exactly 100 years have passed - that's two. There are many who are ready to repeat - these are three. And there are those who are ready to make such a revolution, which would “not repeat the mistakes of the Bolsheviks” and did not create a great power, destroying what is today - these are four.

Ctrl Enter
Noticed a mistake Highlight text and press. Ctrl + Enter
We are
Situational analysis of the death of the MH17 flight (Malaysian Boeing 777), made on the basis of engineering analysis from 15.08.2014Bashar al-Assad: In Syria, not the “revolution” that the enemies are talking about, but the revolution of the army and the people against terrorists
163 comments
Information
Dear reader, to leave comments on the publication, you must to register.