The President proposes to give Rosgvardiyu new powers

November 6 2017
164
Russian President Vladimir Putin introduced a bill to the State Duma, according to which Rosgvardia is authorized to ensure the security of top officials of the subjects of the Russian Federation; The corresponding measure is taken by the decision of the head of state.


Amendments proposed to make the existing federal law "On the troops of the National Guard of the Russian Federation." The text of the draft law is posted on Monday in the database of the lower house of the Russian parliament. 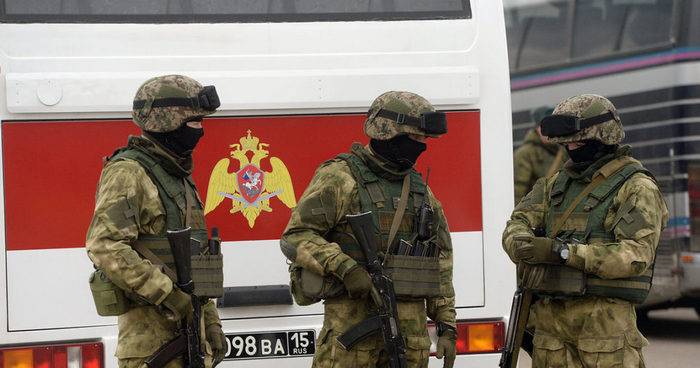 It is assumed that the law will come into force upon the expiration of 180 days after its official publication.

The head of state appointed the deputy director of the Rosgvardi - commander-in-chief of the troops of the National Guard of the Russian Federation Sergey Lebedev as his official representative when the bill was considered by the chambers of the Federal Assembly. The government’s conclusion on the draft law states that the cabinet supports this legislative initiative. The accompanying materials also clarify that its implementation will not require additional allocations from the federal budget, Interfax-AVN reports.
Ctrl Enter
Noticed oshЫbku Highlight text and press. Ctrl + Enter
We are
The action “Military service under the contract is your choice!” In Rostov-on-Don: future contract servicemen, exhibitions and “Russian Knights”The big press conference of Vladimir Putin
Military Reviewin Yandex News
Military Reviewin Google News
164 comments
Information
Dear reader, to leave comments on the publication, you must to register.