Media: Russia can answer the United States at the exit from the INF Treaty with the Courier missile

November 3 2017
127
Russia has an instant and mirror response to a possible US withdrawal from the Treaty on the Elimination of Intermediate-Range and Shorter-Range Missiles (INF) - the resumption of production of the modernized Courier missile, a source in the rocket and space industry said. We are talking about a mobile soil rocket complex with a compact solid-fuel intercontinental ballistic missile (ICBM).


The source said that Russia's response could be the compact solid-fuel intercontinental ballistic 15G59 “Courier” developed by the USSR (according to NATO classification - SS-X-26). Its length was only 11,2 meters, weight - 15 tons. The developers also managed to provide intercontinental range and a very fast launch to a rocket with such a small starting mass. And this task was considered almost impossible. Prior to 1991, several successful missile launches were carried out, but as a result of agreements with the United States, the project was curtailed, reports Military Industrial Courier. 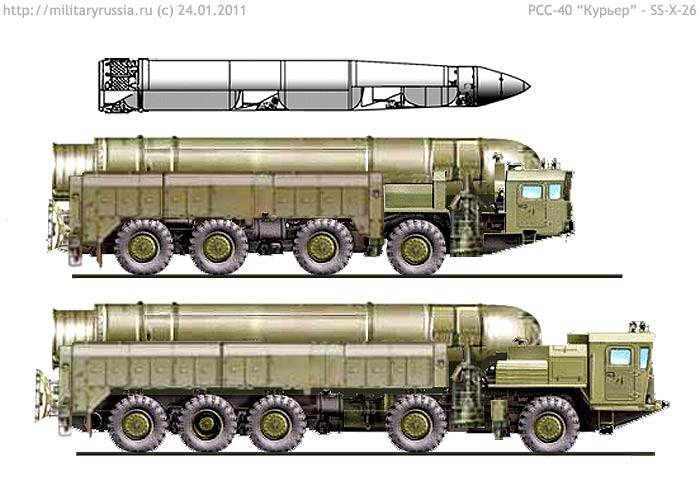 The development of the Courier missile system (according to the NATO classification - SS-X-26) began on 21 June 1983 at the Moscow Institute of Thermal Physics. To this step, the military pushed the realization of the fact that large-sized self-propelled launchers can not be hidden from US space and optical radar reconnaissance equipment. Initially, a launcher was designed for the complex on the MAZ-7909 four-axle chassis and then on the five-axle chassis.

According to the source, the use of "Courier" is characterized by the multiplicity of basing, and it can threaten the United States from the spaces of the Russian North. “Courier” can be placed on any suitable sites of the Arctic islands and even be on any wintering of Russian polar explorers.

If the Americans take the first step, they will reap what they have sown. They will receive the operation "Anadyr" in a modern format
- summed up the source, recalling the operation to transfer to Cuba during the Caribbean crisis of Russian medium-range ballistic missiles with nuclear warheads.

In October, it was reported that experts from the American Center for Strategic and Budgetary Assessments (CSBA) proposed the Pentagon to deploy dual-purpose missile systems capable of carrying nuclear warheads in Poland. In Russia, this is considered a gross violation of the INF.

October 19 President Vladimir Putin said that if the United States withdraws from the treaty, Russia will respond instantly and mirror.

Ctrl Enter
Noticed a mistake Highlight text and press. Ctrl + Enter
We are
60 years ago, the first successful launch of the Soviet intercontinental ballistic missile P-7 took placeNuclear potential of China: history and modernity. Part 1
127 comments
Information
Dear reader, to leave comments on the publication, you must to register.