What keeps us in the WTO?

November 5 2017
101
Taking on WTO commitments in 2012, we expected that we would quickly conquer the “energy heights”, attract billions of investments, and at the same time improve the quality and competitiveness of Russian goods and services, gaining the key to free trade, but wide gates to Western markets. did not open. 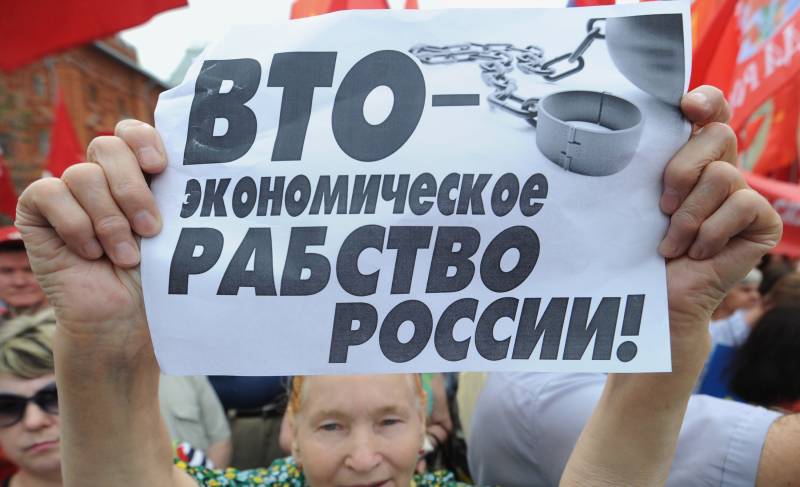 Russia began knocking on the doors of the International Trade Club back in the nineties; it took nineteen years to agree on documents. All this time, the question of joining the WTO has been the subject of serious discussion in Russian political and expert circles.

The most liberal economists headed by former finance minister Alexei Kudrin believed that accession to the WTO is a necessary condition for the development of competition and the economy as a whole. Moreover, he believed that joining this organization would in some measure be able to compensate for insufficient economic reforms, and the state would be able to appeal to WTO rules to protect their own economic interests.

Opponents of Russia's accession to the WTO noted the unpreparedness of the Russian economy to global competition, argued the need to protect its manufacturer. After all, Moscow was demanded to reset trading duties on meat. Foreigners were also not satisfied with the low prices for gas and electricity in Russia, assistance to agriculture, which they called the hidden form of subsidizing our producers, thanks to which they allegedly get an unfair advantage over their competitors.

Putting forward such demands, the WTO member countries wanted to get almost open access to our domestic market with practically no duties, to crush agricultural production, as well as the already uncompetitive industry.
After all, their manufacturers and the United States and the European Union protect from all sides and external duties, and subsidies, and purely prohibitive measures.

We managed to bargain for something when joining the WTO. Quotas were set for the supply of certain types of meat products, under which the duty is not charged, a limit of state support of up to nine billion dollars per year was agreed (with a gradual reduction to a billion of dollars to 4,4 a year to 2018). But in return, they had to agree to other enslaving conditions, the consequences of which were not long in coming.

Under the terms of the agreement with the WTO, Russia is still in a state of transition and is moving towards the fulfillment of all its obligations. But today we can say that membership in the WTO has made its own adjustments to the state of the domestic economy. And not with a positive sign, as government officials wanted, but vice versa.

The study of the St. Petersburg State University of Economics on Russia's membership in the WTO says that as a result of joining this organization, raw materials specialization has increased, we have closed access to the high-tech markets. Russian manufacturers began to easily absorb stronger foreign competitors; due to the alignment of domestic and world energy prices, domestic goods have risen in price; at unprecedented rates, capital is exported from the country through subsidiaries of large Western corporations that have settled here.

Even the accession to the WTO, and those unilateral concessions that our officials hurried to make long before the signing of the official protocol, did the greatest harm to the economy. Tell me, how can our agrarian compete with a Turkish producer of berries, if he is free to take credit for development under 2%, and ours - under 20 – 25% at best - under subsidized 6,5%? Moreover, very often exporters abroad are fully or partially exempted from taxes just because they save jobs and bring profits into the country. For some reason, this condition is not taken into account.

According to estimates of the WTO-Inform analytical center, over the years of membership in the WTO, the federal budget has lost 871 a billion rubles, and taking into account the multiplier effect - from 12 to 14 trillions of rubles.

The most affected machine building (production fell by 14%), light industry (by 9%), woodworking (by 5%). Agricultural machinery in two years was also almost completely ousted by American and European manufacturers. But most of all increased the volume of financial services, oil and gas production, coal industry.

Exports of untreated wood, raw forest increased. Tariffs for gas and electricity due to the “flattening of prices” increased by 2017 by 80% by the year, while the incomes of the population dropped by 2012– 10% compared to 12. And at the same time, our partners in the WTO say that Russian trade policy is detrimental to the European economy.

There was no need to wait for anything else. Especially today, in the midst of tightening anti-Russian sanctions. According to analysts, the restrictive measures applied to Russia are in direct contradiction with the principles of the WTO. And this suggests that the possibility of membership in this organization in the short term is unlikely to provide us with the expected economic preferences.

As soon as Russia tries to defend its rights and interests, it is not heard. It was necessary to point out the WTO to the restrictive measures imposed on our country’s sanctions, as a rebuff immediately followed. Or take the case of European pigs. Their supplies to Russia are limited due to outbreaks of African swine fever (ASF) in Poland and Lithuania. But in the WTO, our bans on suspicious pork were for some reason considered to be discriminatory and not epizootic in accordance with the requirements of the International Bureau.

Under the pressure of foreign partners, Russia, apparently, is ready to give up. In the summer of this year, the Ministry of Economic Development and Trade reported that most of the duties involved in a dispute with the European Union had already been lowered, and the rest would be dealt with shortly.

Having entered the WTO, Russia received a good lesson with palm oil, imported refrigerators, paper and pork, which flooded our markets.

What makes us bow or go to endless concessions? First of all, the conditions of trade that the state assumed when joining the WTO, and the inability of our legislation to protect the domestic market, while remaining within the rules of the International Trade Club.

An example of how a trade organization should have been prepared to join was China, which was able to quickly fit into the WTO system, and now claims the leading roles, driving the United States and its allies out of the market. This was possible, primarily because the PRC, unlike us, went to the International Trade Club, not playing giveaway, but creating a developed industry and agriculture. The Chinese have built more 600 powerful export industries, excelled in logistics and financial and credit system. And all this was done with the support of domestic producers.

Russia joined the WTO in a different capacity. We were taken to a trading club among developing and underdeveloped countries with a commodity-leaning economy.

For those 19 years that we were preparing for joining the WTO, it was possible to calculate and accept adequate taxation conditions, allowing competing on equal terms with world producers, developing a system of government orders and leasing, creating our own system of standards and norms, to which Western competitors would adapt . None of this was done.

At the same time, from the first days of Russia's membership in the WTO, our Western partners acted confidently, brazenly, and sometimes aggressively. For example, having conceived to close their domestic market from foreign aircraft, European countries introduced requirements for engine noise. As a result, our aircraft, which did not meet these requirements, first of all left the market. Thus, the formal requirements of the WTO were met, and the European market was shielded from competitors.

The WTO, like any other international organization, is subject to the influence of lobbying groups of the largest states and, therefore, only representatives of developed Western countries always benefit.

By the way, this feature “with surprise” was discovered by the Nobel Prize winner, former Senior Vice President of the World Bank, Joseph Shtiglits.

Today, Russia is involved in ten cases, each of which can cost up to two million dollars. So, the hopes that with the help of the WTO tools one can defend oneself from US sanctions have collapsed.

But is it worth it to despair? The sanctions that limit the penetration and actions on the Russian market of Western corporations, while playing in our favor. In recent years, agriculture has grown decently: store shelves are filled with domestic meat, grain harvests are post-Soviet records. Export of agricultural products is growing: we export our food abroad for 18 billions of dollars. Our tractors and combine harvesters appeared on our fields, displacing the German “John Dira” and “Ursus”. From our airfields, it is now increasingly not Boeings that take off, but domestic aircraft, the latest VAZ cars are returning to Europe.

Analysts say that the WTO is now in deep crisis. It is unhappy and developing countries, and the United States. The former are not satisfied that there has not yet been an acceptable solution in the framework of the so-called Doha Round negotiations on agricultural trade. And the United States can not accept the fact that the WTO imposes restrictions on them.

Not in favor of this organization is the fact that after the crisis, international trade slipped sharply. It is now growing two times slower than global GDP. Trade is constrained by various kinds of import restrictions related to anti-dumping investigations, political disputes or security issues, the number of which in 2017 increased fourfold compared to 2008 in the year. At the beginning of 2017 of the year in the G-20 countries there were 1200 of such restrictions. And with the coming to power in the USA of Donald Trump, the danger of the growth of protectionist measures only intensified.

Analysts have started talking that the Transatlantic and Trans-Pacific partnerships with the leading role of the United States may soon replace the WTO.

What keeps us in the WTO? Is it not time for us to reconsider the conditions of participation in the “trade club” and think: does Russia really need this organization?

Are we, a self-sufficient country, on 95% secured by natural resources and not losing scientific and technical potential, to remain in the trading club as a stepchild?

Russia participates in much more democratic and independent trade and political structures - from the Customs Union to the Shanghai Cooperation Organization and the emerging Eurasian economic space. Why choose the worst option of all?

Ctrl Enter
Noticed a mistake Highlight text and press. Ctrl + Enter
We are
What you didn't want to know about EnglandSergey Kurginyan: The meaning of the game - a report on the WTO
101 comment
Ad