The guarantor guarantees: the victory over terrorism in Syria, but not the end of the war

November 1 2017
19
Syria’s early return to the pre-war level is hampered by a number of factors, one of which remains Ankara’s two-faced policy in this process. On the eve, the Turkish army, having fired at the quarters of Kurdish formations in Aleppo, once again demonstrated their unwillingness to follow the agreements reached in Astana. 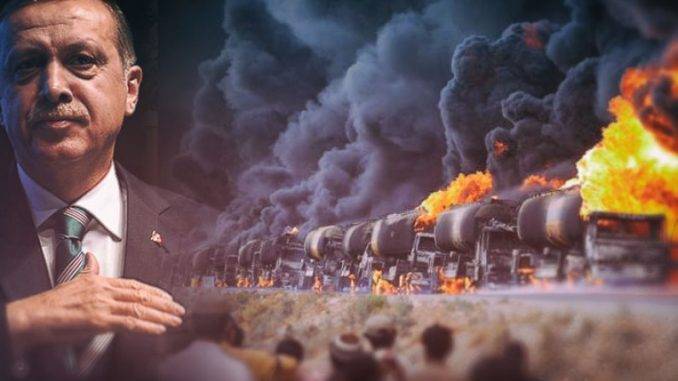 In addition to Turkey, other Syrian “friends” also bring considerable difficulties. It can already be stated that the plan for the collapse of Syria has failed and now the United States, Israel and other "partners" are not averse to receiving a consolation prize. For Jerusalem, the Golan Heights remains such a tasty morsel, for Washington - oil fields in the eastern part of the country.

Ankara, who pursues ignoble goals, is trying to save the face of a decent player, doesn’t mind making money off of the neighborly good. Taking on the role of a party to the conflict, designed to bring the warring parties to an early reconciliation, the Turkish guarantor still performs the functions of a brake in the peacekeeping mechanism.

In the course of the May talks held in Astna in Russia, Turkey and Iran, the Turkish authorities were able to deploy a small group of troops in Idlib province (one of the four de-escalation zones) to carry out peacekeeping activities. In early October, Ankara deployed the first observation point on the Syrian border, and by mid-month, the first armored vehicles with a red crescent on board entered Idlib. For two weeks, the guarantor was so fascinated by the introduction of his “peacekeepers” that he seemed to stop noticing how the peacekeeping operation began to resemble an act of aggression more and more.

This week, the Syrian neighbor dispelled remaining doubts on his account, having made repeated artillery strikes against the positions of Kurdish formations in the areas of Afrin and Aleppo. In the latter during the Saturday shelling killed 3 civilians.

Obviously, in the actions of Turkey and, in particular, its current leader, Rejep Tayyip Erdogan, a certain “conflict of interests” is now traced. Rendering active assistance to the militants throughout the war, and, in fact, being for them one of the main trading partners, Ankara is forced to observe the inglorious end of its wards and even formally participate in this process. You can not discount the relations of the Turkish president with the leaders of terrorist groups. As is known, he is personally acquainted with some of them.
Be that as it may, the main thing that pushes Ankara to continue to push troops into Syria is a lost opportunity to “chop off” a piece of neighboring land. Understanding this fact pushes the Turkish authorities to mobilize available resources, violate the Astana agreements, bombard the hated Kurds, and even go into conflict with a military ally in the United States. Remarkably, dreaming of “making money” on the problems of a neighbor, Erdogan runs the risk of acquiring problems for himself, spoiling relations not only with the States, but also with Moscow, and ultimately losing the Russian market. Also remains an open question about the creation of Kurdish autonomy.

In the meantime, the next negotiations on Syria begin in Kazakhstan, where the Turkish side, for sure, will declare the need for an early resolution of the conflict, while continuing to prepare a springboard for a full-scale attack on Idlib. The only question is, will the spirit suffice to turn this adventure under the nose of geopolitical heavyweights? With a strong desire, you can pinch the Turkish nose ...

Ctrl Enter
Noticed oshЫbku Highlight text and press. Ctrl + Enter
We are
What you didn't want to know about EnglandInterview by President Bashar Al-Assad to the Sunday Times
Military Reviewin Yandex News
Military Reviewin Google News
19 comments
Information
Dear reader, to leave comments on the publication, you must to register.