New naval base in the Kuriles: "shock work" for three years?

October 31 2017
95
"Impact labor" base of the Pacific fleet the Kuril Islands can be built in three years, the admiral says. The senator believes that the creation of the base should go “without rushing jerks.” Why do we need such a base? There is no question for a military expert: this is a preventive measure in case of aggravation of the situation in the Asia-Pacific region. 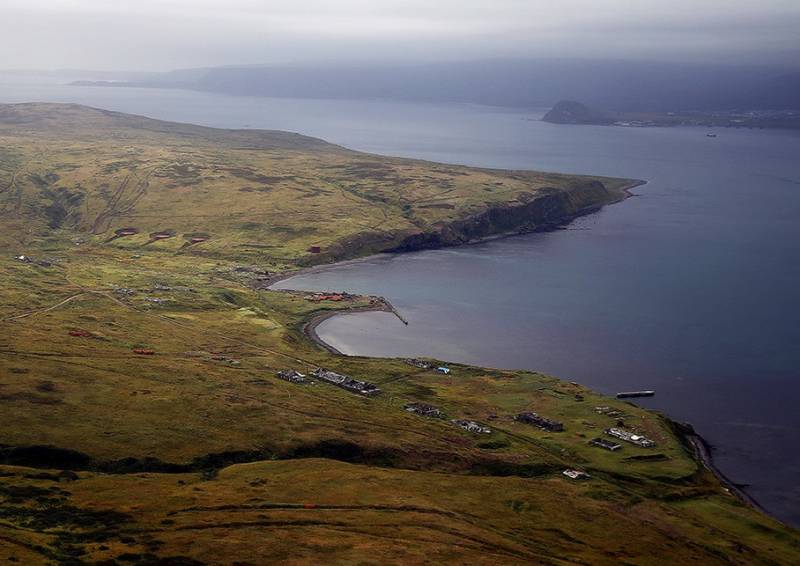 Recall Kuriles - not just land in the sea. The islands are of military-strategic and economic importance, which is why Japan does not stop the dispute with Russia over the “northern territories”. The dispute stretches for decades; the subject of it are the South Kuril Islands - Iturup, Kunashir, Shikotan and Habomai. In the Kremlin, the islands are considered part of the Kuriles and do not allow a review of their current status.

For Russia, the islands represent the natural front line of the Far Eastern coast of the country and provide for the exit of the Navy ships into the Pacific Ocean. In this regard, the straits between the South Kuril Islands, for which Japan claims, are especially valuable.

Economically, the islands are rich in minerals, fish and seafood.

Because of the protracted “dispute”, relations between Japan and Russia are far from ideal, and each time politicians from Tokyo “express regret” when someone from Russian politicians visits the “northern territories”. Probably soon in Tokyo will be completely upset: the Russians gathered to create a base of the Pacific Fleet in the Kuril Islands.

According to Franz Klintsevich, a member of the Federation Council of the Federal Assembly of the Russian Federation, the Navy base in the Kuril Islands will be able to receive any ships, including the first rank. Work to create a base, according to the senator, should begin soon. "Everything goes strictly according to plan, without rush hands", - quotes him RIA News".

Klintsevich also said that the airfield network will be restored on the Kuril Islands, and these works are also associated with the creation of a naval base.

The Russian admiral Valuev estimated: the base of the Pacific Fleet in the Kuril Islands could be built in three years. "Impact work"!

The naval base of the Pacific Fleet in the Kuril Islands by shock work can be created in about three years, says former Baltic Fleet Commander Admiral Vladimir Valuev. “I think that shock labor can create a base in the Kuriles for three years. But it will cost a lot. Before making a final decision on the construction, a serious economic rationale is needed, ”said Valuev RIA News".

He recalled that the Soviet Union had plans to base the forces of the Pacific Fleet on the islands of the Kuril ridge. They were not implemented due to the collapse of the USSR.

According to the admiral, the entry and exit of naval forces from prospective points of basing are problematic: “When I served in the Far East, the issue of locating the ship’s connection of the Pacific Fleet in the Kuril Islands was considered. On the islands it is advantageous to create a base for the only reason - direct access to the ocean. Of the places that were identified as suitable for it by geometry, the difficulties were as follows. The first is a difficult ice situation in winter. The second is the ebb and flow of about six meters. The third is strong winds. ” Hence, the complex infrastructure: the admiral explained that the base must have support forces (icebreakers, tugs), and the piers must synchronize with the water level - to emerge and dive. “The infrastructure that will be needed for the base station is very complex. In addition to the piers, warranty oversight groups and repair facilities are needed to carry out minor repairs on site, ”Valuev told the agency.

Franz Klintsevich’s statement on the establishment of a naval base in the Kuril Islands commented Reedus expert center for strategic conjuncture Oleg Ponomarenko.

In his opinion, the base is a preventive measure in the event of an aggravation of the situation in the Asia-Pacific region. The situation is unstable, and the arms race has recently been going on here. Therefore, construction is as important as ever.

“Relations [between Japan and Russia], in fact, are not settled,” the expert noted. - And all agreements may be irrelevant tomorrow. This may be a worsening of relations with Japan. They can move away from their neat military model to a more aggressive one. In the long term, relations with China may deteriorate. Our current relationship is not forever. ”

Mr. Ponomarenko believes that it is impossible to resolve the protracted dispute over the islands: the Japanese will always claim them. But "the construction of the base closes this question de facto for a long period of time."

"Having built and strengthened, so to speak, we will not leave from there."

In addition, the Russian government takes into account the location of American bases located nearby: “Do not forget about the American bases, Alaska is also close, while they have a serious fleet,” said the expert.

Recall, back in 2016, the Ministry of Defense planned to create on about. Matua's base for the ships of the Pacific Fleet and restore the airfield. The Minister of Defense of the Russian Federation spoke of intentions "to restore, and not only restore, but also actively exploit this island."

In February, 2017, Sergei Shoigu, has already announced that a division will be located on the Kuriles. Later, during his visit to Japan, he explained that the division "is being created in the last six years, it is being created not against someone, but exclusively to protect the territory of the Russian Federation."

This is not to say that the plans are not being implemented. Now the Kuril Islands stationed 18-I machine-gun and artillery division of the Eastern Military District. She even has a page on Wikipedia.

It is noted that the headquarters of the division is located in the village. Hot Keys on oh. Iturup. The division itself is remarkable in that it is the only machine-gun and artillery unit in the Russian armed forces.

The question of the Kuril Islands is a kind of question of honor for Russia. A government that would abandon the islands in favor of Japan for the sake of any foreign policy conjuncture considerations would cause such a decision a storm of popular indignation. “To hand over” the islands would have meant turning the country back to the nineties of the last century, when Russia, this largest fragment of the collapsed USSR, had a very low status in the international arena, and its population turned into “shuttle traders”, homeless, and dying out. Proponents of a strong government in Russia want neither a repetition of the nineties, nor a rejection of the Kuriles.

As for the Japanese, they skillfully use in political games difficult times for Russia, due to Western sanctions and relatively low oil prices. Tokyo talks a lot about economic cooperation with Moscow, however behind these statements an old goal is clearly visible: Russians, return the “northern territories”!

Observed and commented on Oleg Chuvakin
- especially for topwar.ru
Ctrl Enter
Noticed a mistake Highlight text and press. Ctrl + Enter
We are
Kuriles - an integral part of our homelandNew Japanese "song" about the South Kurils
95 comments
Information
Dear reader, to leave comments on the publication, you must to register.