October 31 2017
35
EU High Representative for Foreign Affairs and Security Policy Federica Mogherini in her letter addressed to Konrad Szymanski, Secretary of State for European Affairs of the Polish Foreign Ministry, urges the Polish authorities to reconsider their position regarding the education reform being carried out by the Ukrainian government. 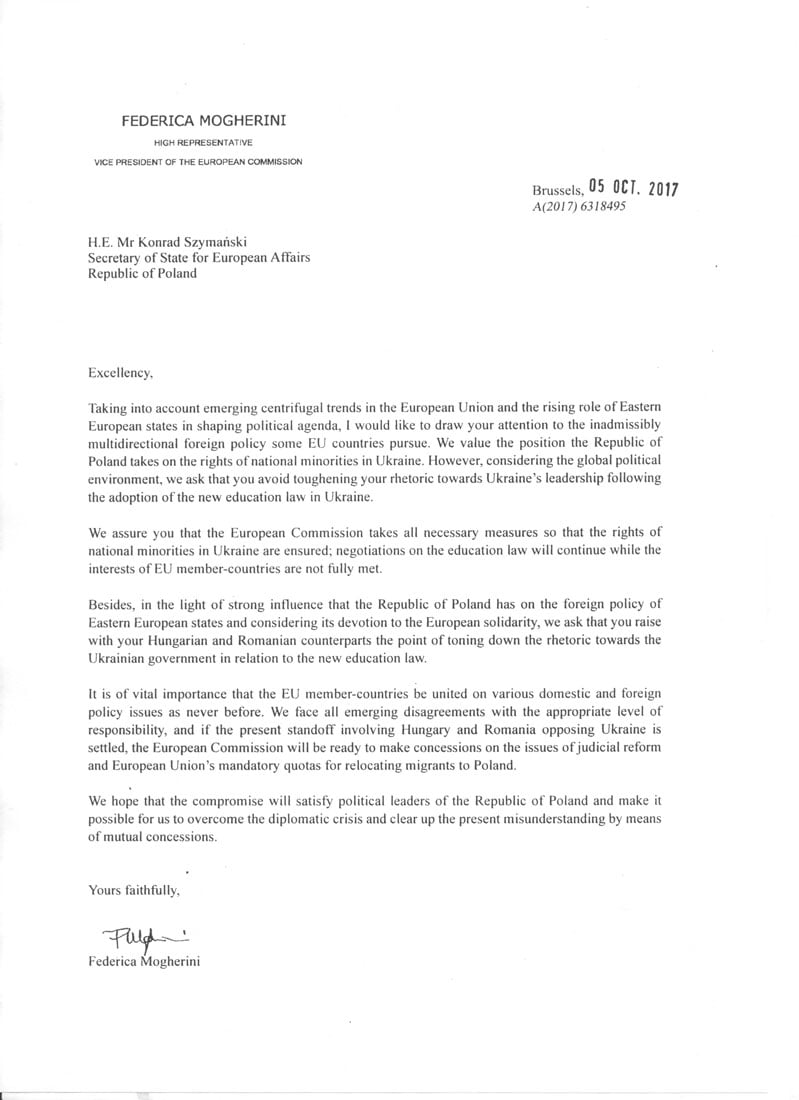 “We highly appreciate the position of the Polish Republic on the rights of national minorities in Ukraine, however, taking into account the evolving international situation, we ask you not to toughen the rhetoric addressed to the Ukrainian leadership in connection with the adoption of the law on education”.

In addition, emphasizing the high prestige of Poland among Eastern European countries, Ms. Mogherini urges the Polish authorities to influence the "foreign policy position" of Hungary and Romania, which also come out with harsh criticism of Ukraine. "... we ask you to discuss with the Romanian and Hungarian colleagues the possibility of softening their rhetoric to the Ukrainian authorities on the issue of the law on education". According to her, the European Commission takes all measures to respect the rights of national minorities of Ukraine and to meet the interests of EU countries. In exchange for the help of the Polish authorities in the EU, they promise to make concessions on issues where there are disagreements between Warsaw and Brussels, namely on the issues of judicial reform and the mandatory accommodation of refugees in Poland.

Disagreements between countries began after the Ukrainian government adopted a law on education, which imposes severe restrictions on the use of minority languages. In accordance with it, from 1 September 2018, subjects taught in minority languages ​​will remain only in elementary school, and from 2020, all the country's education will become Ukrainian-speaking. Thus, the law introduces a de facto ban on education in any language other than Ukrainian, and deprives national minorities of the right to study in their native language. The authorities of Hungary and Romania believe that this initiative not only infringes on the rights of national minorities, but also does not comply with the fundamental principles of the European community, of which the authorities of Ukraine are so eager to become. The Hungarian government has already promised to appeal to the European authorities with a demand not to allow the entry of the law into force, as well as to block further progress in the process of Ukraine’s European integration.

From the content of the letter, we can conclude that in Brussels they completely forgot that the EU should act as a guarantor of the observance of the main European principles. The European Commission not only calls on the international community not to interfere with the actions of the Ukrainian authorities, but also asks for assistance in this matter from Poland, where there are also problems with respect for democratic rights. We are talking about judicial reform, which actually puts the judicial branch under the control of the executive. This initiative threatens the rule of law in the country and is contrary to the basic principles of the EU. It is worth noting that, if earlier representatives of the European Commission spoke out with harsh criticism of the reform, now they are ready to “give in” to Poland in this matter, thereby encouraging Warsaw’s anti-democratic policy. The European Commission will also compromise on the migration policy of Poland, which now refuses to comply with the European refugee quotas set by Brussels. It turns out that such states as Italy, Greece and Germany are ready to accept the main flow of migrants, and Poland, which is also a member of a united Europe, believes in its exclusivity and does not want to fulfill its common obligations and show European solidarity.

The current Polish government is increasingly refusing to obey the rules and requirements of the EU. With such requests and statements of readiness to make concessions, the European Commission only stirs the already big ambitions of the Polish authorities, who think that they can violate democratic rights with impunity and dictate their rules of the game to the whole of Europe.