Gas capitulation of Ukraine will be signed in 2019 year 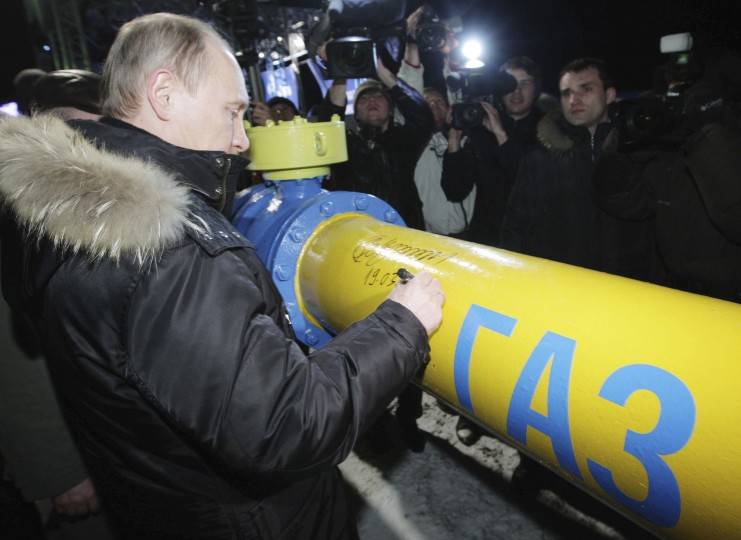 2019 year is inexorably approaching us. It will be the year when Ukraine will no longer depend on Ukraine for the supply of gas to Europe. Moreover, it will never depend again. And Kiev will never receive any more money from this profitable business.

In 1980's, the first gas pipe connected Siberia and Western Europe. This had two consequences. The first consequence: the USSR, and then Russia received the most important tool of geopolitical pressure on the Europeans. The second consequence: in Europe, formed a powerful pro-Russian lobby.

And the highest level. Let's remember that the ex-Federal Chancellor of Germany, Gerhard Schröder, today works in the top management at Rosneft. And those who right now in Europe are defending Russian interests have not yet been officially named, but I think that in years through 10-15 we will also learn about their merits. 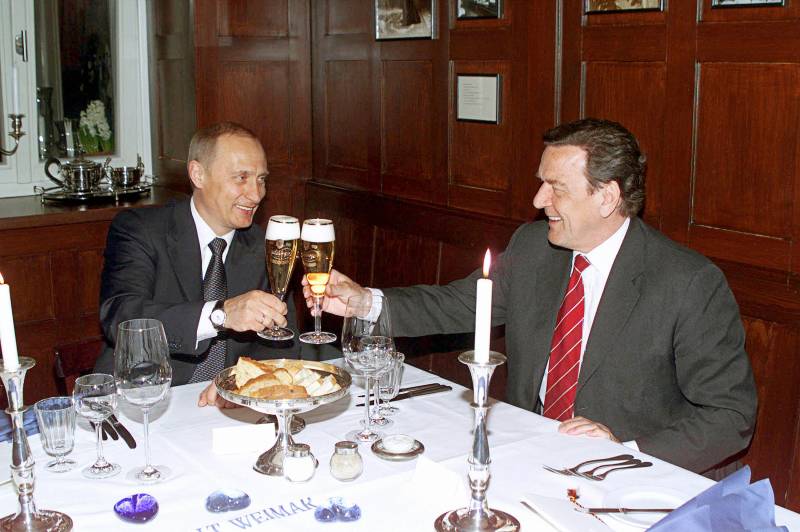 From the very first day of the start of this project, the United States did not like this situation and they did everything to break it. Did not work out. At the beginning of 2000-x it became clear: Russia is selected from a political and economic pit, and oil and gas will be one of the main sources of income for the period of re-industrialization. And Washington did everything to cut off from Moscow the most important and promising markets for their sales.

Ukraine has become one of the most important sections of the gas battle for Europe. As soon as President Viktor Yushchenko came to power, he decided to break off super profitable gas contracts with Moscow. There was no economy in this decision (Ukraine was losing billions of dollars a year), but only a policy acceptable to Washington. It was necessary at all costs to show Europe that Russia cannot guarantee its gas supply there, and Europeans need to attend to the search for other sources of its supplies.

This, in essence, was the leitmotif of all the so-called gas wars between Ukraine and Russia. Kiev, losing colossal money, quarreled with Moscow all the time, creating problems for Europe and thus digging its own grave.

Naturally, all this did not please not only Russia, but also European countries, whose well-being was actually made dependent on Washington’s goodwill, and therefore, as soon as the problem became apparent, it was decided to build workarounds. At the same time, in this direction, Moscow has always found complete understanding with Berlin. And not by chance. While Moscow and Washington were butting and pushing Kiev to their side, taking advantage of the moment, Germany began to build its gas game.

Germany - the gas hub of Europe

Before the first “Maidan”, Kiev could be called the main gas hub of Europe. Through it, more than 100 billion cubic meters of gas were pumped to the west, which made the Ukrainian route the most important at that time and even irreplaceable.

A new gas pipe along the bottom of the Baltic Sea, and even more so the construction of its second stage, completely changed the existing gas balance. They turned Germany into just such a hub and not only completely excluded both Ukrainian and Eastern European gas blackmail (and the United States could have arranged it), but also made many European countries in the future completely dependent on the will of the German monopolist.

Norwegian gas, by the way, is also delivered to many European countries through Germany. 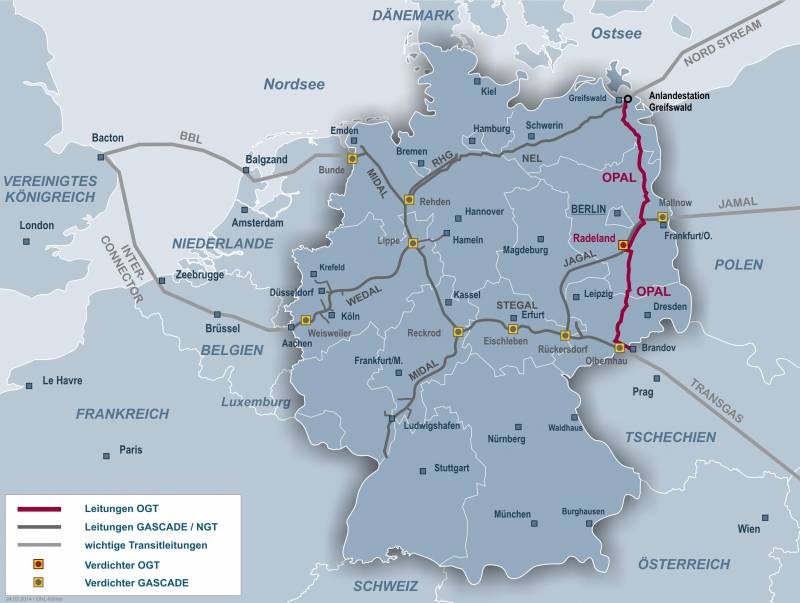 Thus, Germany in this game tried in one fell swoop to replace with itself both Ukraine and the United States. And I must say that with the help of Moscow, which also benefited from this situation, she succeeded.

Now it becomes clear why Berlin always shook Ukraine, and then always betrayed her in everything. Nothing personal, as they say.

Is it any wonder that it was Germany that not only allocated money for Maidan but also at the same time invested huge amounts of money in bypass gas routes from Russia to itself. And then, when it was time to move on, Berlin began to adjust European legislation for these projects and ... even build its own new bypass routes to complement Russian sea routes.

Recently, almost all restrictions of the Third EU energy package have been removed from the continuation of the Nord Stream, the OPAL gas pipeline with a capacity of 36 billion cubic meters. And in February, 2018, a tender will be announced for the construction of another EUGAL gas pipe, which will run in parallel and will have a capacity of 48 billion cubic meters. And, according to European experts, the project will have no problems with investors.

That's right, gentlemen, Ukrainian "patriots", to do business. Your German "partners" simply used you to achieve their goals. By the way, very cheaply used.

At the same time, the processing of Ukraine continued. In order for Europe to receive Russian gas stably and without force majeure, a backup route was needed, which would be used in case of repairs on the new main highways and could pump additional volumes with a sharp increase in gas consumption by European countries (with large frosts).

It is this role that the Europeans INITIALLY prepared the Ukrainian gas pipe. The fact that this is not a forced decision, but a long-term plan becomes clear if you look at when and how much money the same Germans invested in their own and Russian new gas pipelines, and also recall the epic about the dismemberment of Naftogaz of Ukraine ...

Ever since the time of Viktor Yushchenko, Europe has said that it will not give money for the modernization of the Ukrainian gas transport system until it is allocated to a separate legal entity. No persuasion did not act, the Europeans in this matter were adamant. Years passed, Kiev artachilsya, artachilsya (and who wants to just lose billions of dollars every year ... of course), but was forced to surrender. And the last nail in the coffin of the Ukrainian gas monopoly drove the second maidan. And here, as they say, the German gas industry has the color and flooded. After a sharp deterioration in relations with Russia and the acceleration of work on bypass routes (here Moscow was greatly helped by an agreement with Turkey), it was not difficult for Berlin to bring Kiev to the last step of the gas war - the surrender to Moscow.

True, they, having taken everything away from Ukraine, did not begin to deprive official Kiev of “gidnost” in the eyes of their citizens. The very act of surrender for him Europeans will sign themselves. For this, Uktransgaz is allocated to a separate campaign, and its management will be transferred to the European consortium, which will sign all the necessary agreements with 2018-19 with Gazprom. Moreover, Europe will not pay Europe for this, but will take the Ukrainian pipe either in concession or on lease, but with the obligatory condition of full control over it.

This was recently announced by the head of Naftogaz of Ukraine, Andrei Kobolev. 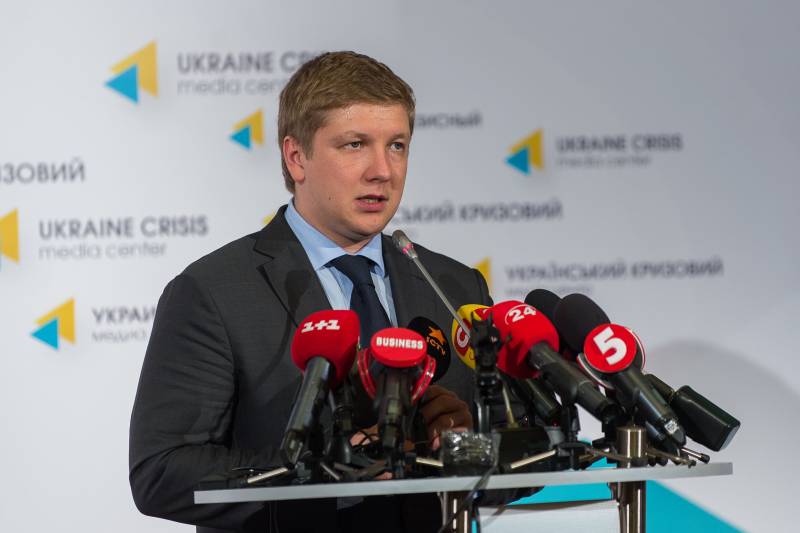 All the puzzles are formed, it remains to take stock.

Very soon, Ukraine will cease to be a subject of the European gas market. All the gas instruments that she has left (very small in fact) are transferred to the management of Europe, which will then decide everything for Kiev itself.

Germany will become the new main gas hub of Europe and thus will completely take over the role of Ukraine in this regard. Russia in Berlin will receive a reliable partner, and at the same time an interested person in order to further increase its share in the European gas market. As a result, the United States is losing the ability to control European gas flows, which means that they can influence the situation on the continent much less.

And this is a different geopolitical alignment. And in this case, we should expect the expansion of economic ties between Russia and Europe, which in the end may end with the formation of the strategic axis Moscow-Berlin, the outlines of which are clearly visible at least in the gas segment.