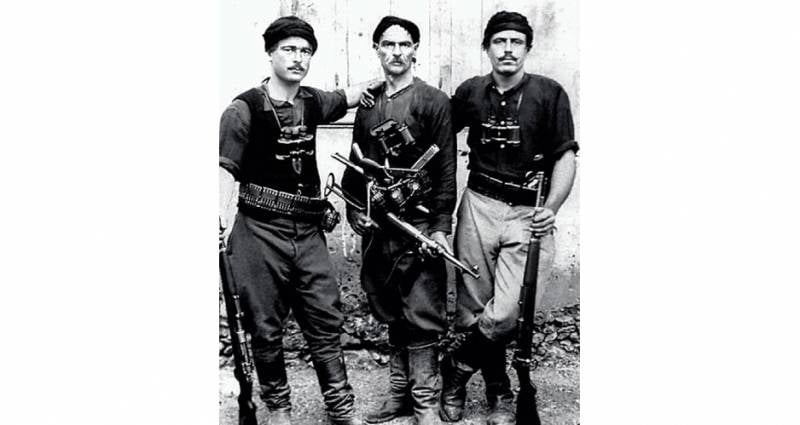 October 26 The 1942 of Florin concluded an agreement on the coordination of the actions of the liberation armies of Greece (ELAS), Yugoslavia (NOAA) and Albania (NOAA). It was signed by Arso Jovanovic (Yugoslavia), Elas Veluhiotis (Greece) and Enver Hoxha (Albania). The main task of the document was to create a corridor free of occupants: the Albanian Adriatic - southern Macedonia - northern Greece (Thessaloniki region) with the simultaneous release of Crete and the Peloponnese peninsula with the participation of the Anglo-American special groups.

These territories were preparing for the Allied landing, which was expected after the victory over the Italian-German forces at El Alamein (North Africa). In the future, it was planned to launch the combined forces of the partisans and the Anglo-American units on Sofia, Tirana, Athens and in the direction of Belgrade. True, all these were the intentions of the leadership of the liberation armies of Yugoslavia, Greece and Albania.

The command of the Anglo-American troops in Egypt more than once assured the Balkan partisans of the operational redeployment of part of their troops from Egypt and reinforcements from British Cyprus to the south of the peninsula.

The leaders of the liberation armies called on the Western allies to take decisive joint actions in the region in October-November 1942, because, firstly, the main German-Italian forces were stuck at Stalingrad and, secondly, military activity in Hitler’s rear would accelerate the Red Army’s victory . However, allies often have different tasks.

Yes, the victory of El Alamein (November 11 1942 of the year) freed up a significant part of the forces of Great Britain and the United States, together with their Navy and Air Force. But the Western allies did not hasten to actively cooperate with the communist and pro-communist armed formations of Yugoslavia, Greece and Albania. The people's armies, which ultimately played a large role in the liberation from occupation, were viewed in Washington and London as an obstacle to the plans to restore pro-Western monarchist regimes in the Balkans. Therefore, the successful initial joint actions of ELAS, NOAJ and NOAA were not supported by active operations of the Western allies. Those decided to limit themselves to the periodic bombardment of the positions of the Italian-German forces and several air operations to supply the liberation armies. After El Alamein, the Allies attacked Libya at that time in Italy, while at the same time a landing operation “Fakel” was in Algeria and Morocco, aimed at connecting with the eastern grouping in French Tunisia.
As a result, a pass-through corridor in the south and south-west of the Balkans could not be created by the end of 1942. This happened only two years later, when Italy was already out of the war, and the German units began to hastily evacuate from Greece, Albania, and from the south of Yugoslavia.

In September, a British sabotage group was deployed from Cyprus to the Peloponnese in Peloponnese, but it interacted mainly with the monarchist group "National Republican Greek League" (EDES) of General Napoleon Zervas. Although its strength was four times smaller than the ELAS, it was this “league” and its associated combat units that already in the spring of 1942 with the participation of British commandos and encouraged by the German authorities provoked the outbreak of a civil war, which ended again with the help of the British (in 1943 – 1944- m) unbridled terror against the Communists and their sympathizers.

Zervas himself admitted that the restoration of the anti-communist monarchy was discussed in 1943 – 1944 even with the German occupiers, since they were potentially ready to cooperate with London in the struggle against the communist underground and ELAS. The similar contacts of the British emissary in Albania (1943 – 1944) by Colonel D. McLean with the same “super task” are mentioned by Hodge in his memoir book “Imperialism and Revolution” (Tirana, 1977, Russian).

Balkan Stalingrad in the autumn of 1942 did not take place only because of the two-faced policy of the Western allies, who had "their own views" in the region. However, the same happened in April-May of 1941, when Yugoslavia and Greece, delaying Nazi aggression against the USSR, fought against the German-Italian forces. London first assured Belgrade and Athens in an ambulance large-scale operation in the Balkans and on the South African islands of the Dodecanese that belonged to Italy. But the British troops who landed near Athens, on the Peloponnese and Crete in mid-March - early April 1941, almost immediately abandoned the defense of the Greek capital, the offensive in the direction of Albania with Yugoslavia and the operation on the Dodecanese islands. And in Crete, from the middle of May, the “strange war” of the British against Germany was repeated (in September, 1939, March and 1940), which soon led to the occupation of the whole of Greece. The despicable policy of London provoked a series of suicides of officers and soldiers of the Greek and Yugoslav troops.