In the textbooks of Tatarstan, the republic is called "a separate state" 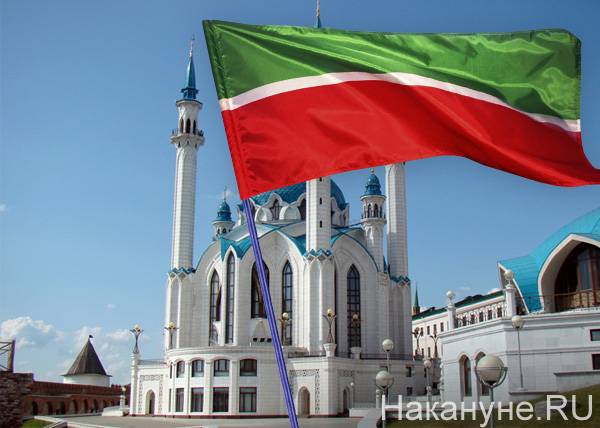 Schoolchildren of the Republic of Tatarstan often cannot unequivocally answer the question in which country they live: textbooks have been tangled. Separate textbooks on the Tatar language categorically declare a "sovereign independent state of Tatarstan" and put the region almost at the same level with the countries - France, Great Britain and ... Russia. Some of them, although they are distributed in schools, are excluded from the federal list of textbooks recommended by the Ministry of Education and Science of the Russian Federation, others are not even included. How the subject of the Russian Federation impersonates itself as a “country in the country” - read in the material on the eve of .RU.

“Report that Tatarstan is a sovereign state,” “Tatarstan has its own state symbolism,” “Tatarstan is an independent state, each state has its own symbols,” such tasks are offered to students in the Tatar language class. Parents of Russian-speaking children notice other, not so obvious alarming “bells”.

“By the way, did anyone pay attention to the main page of electronic diaries? Look carefully at which pile of books the boy with glasses leaned on. At the base — a fat book — Tatar's body, above — thin biology, chemistry, physics, for some reason almost everything There is no Russian language textbook at all, ”writes Olga in the group“ Committee of Russian-speaking parents of Tataria ”on the social network Vkontakte.

She is supported by other concerned parents. On the cover of one of the textbooks depicted the country and their capital. France, Great Britain, Turkey, Russia and Tatarstan stand in the same row, below are their sights: the Eiffel Tower, Big Ben, the Colosseum, the Kul Sharif Mosque, the Syuyumbike Tower. 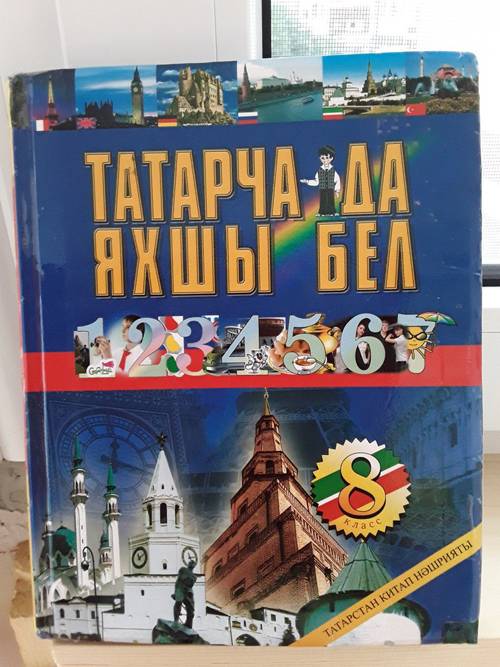 “There was no place for the Moscow Kremlin there,” parents noted. 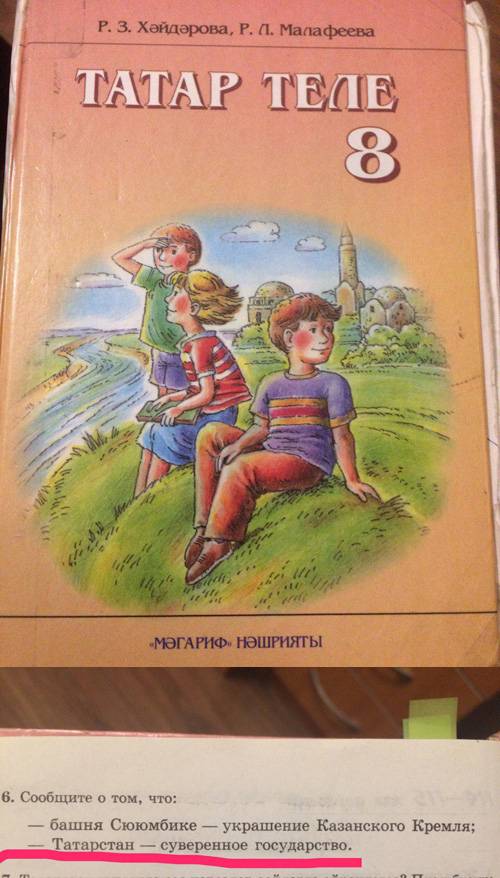 Is the same история with gift editions that children receive upon entering school. In the books, only the Republic of Tatarstan is mentioned as the Motherland, and Rustam Minnikhanov is mentioned as the President. Russian-speaking parents admit that they get rid of such literature without a twinge of conscience.

Local activists consider the policy of the authorities to impose Tatar identity on Russian-speaking children for separatism.

"It should be regarded as separatism. I generally think it is right to bring to justice those who allowed these textbooks, because this is the most despicable blow to children. This is on the verge of a foul: in regional schools the President of the Russian Federation, the flag of the Russian Federation and the anthem of the Russian Federation and the President of the Republic of Tatarstan, the flag of the Republic of Tatarstan and the anthem of the Republic of Tatarstan hang symmetrically. And then - even more “cooler”: the head of the municipal district, the flag of the municipal district, the anthem of the municipal district. ! Avnoznachnoe This "parochialism" must be stopped ", - shared his opinion with a member of the parent committee On the eve of Russian-speaking parents, the chairman of the Society of Russian Culture of Tatarstan Mikhail Shcheglov, adding that such phrases in the textbooks - is" mine "under the security of our country. 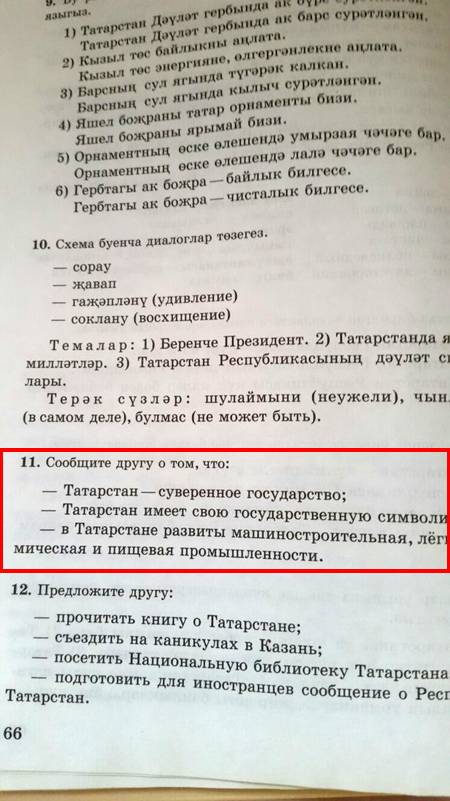 There is really cause for concern. Back in 2008, more than 80% of the surveyed schoolchildren of the republic were called Tatarstan as their home country. The study was conducted by the head of the center of ethnocultural education strategy of the Federal Institute for Educational Development Olga Artemenko.

"In the Republic of Tatarstan and in other republics, for example, both in Yakutia and Chuvashia, during 25 years, the formation of ethnic consciousness took place, the formation of republican citizenship consciousness among the speakers of these languages. As we can see, in some cases, it is one thing to write, and another to purposefully shape the consciousness, creating an environment not only in the educational system, but in general, an information environment aimed at the subconscious formation before minant sense of belonging to a particular ethnic group living in its small homeland. But you can not divide the homeland. For a child there can be no small or large homeland. She is alone, "Olga Artemenko told Nakanune.RU.

“Subversive” textbooks, as a rule, are no longer included in the list recommended by the Ministry of Education for use in schools. Some of them were excluded from it quite recently, others did not enter at all.

For example, the textbook of the Tatar language for elementary school in co-authorship: I.L. Litvinov, E.R. Sadyykova, L.I. Garipova left the register in 2015. Somewhere he still applies, as evidenced by the educational programs posted on the websites of schools. 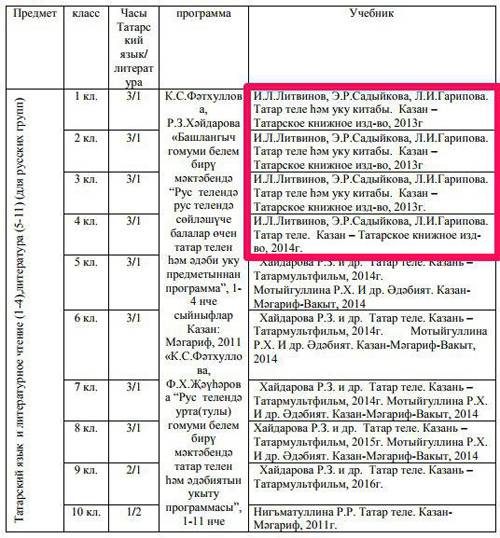 From the educational program of the Kazan gymnasium

A textbook Khaidarova and Malafeeva "Tatar body 2" in the list and was not.

"I know about these textbooks. Of course, the use of such textbooks in the school educational process is unacceptable. We predicted that a situation when it is mandatory to impose learning of the Tatar language on everyone will only lead to interethnic tension. And that interethnic tension in the Republic of Tatarstan it is growing, it can be clearly seen by those who want to see it, "said Olga Artemenko.

The expert is confident that the use of such textbooks in schools is a serious violation of federal legislation by the authorities of the republic.

"With 2008, we sought to ensure that only those included in the federal list were used as basic textbooks in schools. Back in November, 2008, speaking at the State Council in the Republic of Tatarstan, I spoke about the need to include textbooks in native languages ​​from the number of languages ​​of the peoples of Russia in the federal list of textbooks. This position was enshrined in 2012 in the federal law on education in the Russian Federation, ”said the head of the center for ethno-cultural education strategy of the Federal Institute for Education Development,“ But We see that the Republic of Tatarstan allows itself to violate federal legislation both in the use of textbooks, and in the compulsory study of the state language of the republic, and in the number of hours allocated for its study, and we can also list the violations.

The prosecutor's office has already seriously taken up the situation in Tatarstan. Thousands of parents' appeals to the supervisory authorities regarding the forced study of Tatar in schools, often to the detriment of Russian, finally yielded a result. The prosecutor's office of the Vakhitovsky district of Kazan made a presentation of one of the schools where the curricula were in violation of the law. This was followed by a full inspection of schools by the Federal Service for Supervision in the Field of Education and Science.

"Rosobrnadzor is currently working in the Republic of Tatarstan, it is being checked. And I think that as soon as it completes its work, all changes will be communicated to you. They are working until October 27 from yesterday," the deputy minister of education and education told Interfax. science of Tatarstan Larisa Sulima last week.

“Events are developing very interestingly and swiftly. Now prosecutors’ presentations are being sent to school principals, who find themselves alone with the problem. They don’t know what to answer to the mass requests of parents to cancel the Tatar language as a compulsory subject. his mink and pretends that nothing is happening, "- said Mikhail Shcheglov.

The excitement arose after the statement of Vladimir Putin about the inadmissibility of reducing the volume of learning the Russian language in schools. But the problem of "separatism in textbooks" is not concerned.

According to Shcheglov, the thing is that the regional elite lives according to its previous laws, in its order, uses its schemes, created at the beginning of 90's, Mintimer Shaimiev and his team.

The Republican Ministry of Defense as if ignores the public outcry. The only message - “clarification on the issue of teaching the Tatar language in general educational institutions of the Republic of Tatarstan” from September 7, where the legality of compulsory study of the Tatar language is said, went down the tape, making it positive news about the autumn holidays, the winners of competitions and contests.

At the time of publication, the Ministry of Education of Tatarstan could not explain why schoolchildren study according to the "forbidden" Tatar textbooks. On the eve.RU expects a response to the information request.

Tatarstan President Rustam Minnikhanov also remains silent. After his speech at the State Council at the end of September, he did not make new statements on this topic.

The almost paranoid desire of local authorities to instill Tatar culture in all residents of the republic, regardless of their nationality, is manifested not only in the educational system.

“Here, the local parliament is the State Council of the Republic of Tatarstan. Over the building on the steeple for many years, there was only one flag — the flag of the republic. Above the entrance doors below were two flags - Russia and Tataria, and at the top, a huge, prominent one from everywhere — the Tatar prosecutor wrote A remark on this, to which he received a quite humorous answer in the spirit: "The law says" ON state institutions ", and the expression" OVER state institution "is not in the law! And we really do have two flags at a state institution - both Russia and Tataria. "Now, however, the spire is empty, the only flag of Tataria has been removed, apparently, not to tease," said activist Mikhail Shcheglov. 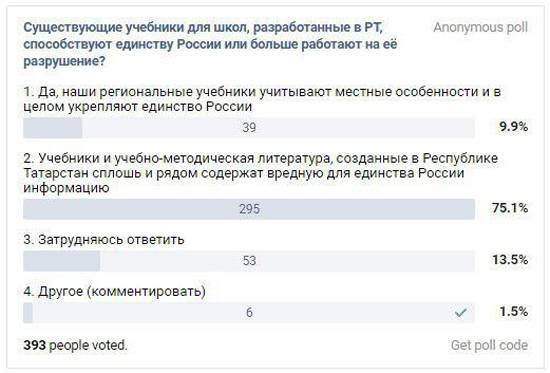 According to the activist, the main law of the republic is outdated and behind the times.

“It’s necessary to change everything radically, starting with the legislation. Look, the Constitution of the Russian Federation says that, apart from the state language of Russia, the state languages ​​of the regions are allowed if local parliaments adopted them as such. But the Constitution was written in 1993 in a month after the shooting of the White House. Naturally, many things have changed since then, it is necessary to bring them into line with life, with realities. There are no regional states in Russia now, and we must remove all their signs from legislations of all levels ", says Mikhail Shcheglov .

In January, the 2016 of Vladimir Putin said that the founder of the Soviet state, Vladimir Lenin, "laid the atomic bomb" under the USSR, bearing in mind the principles of government. It is strange, moreover, that the federal government does not pay attention to much more real "mines" that have not been shared from Yeltsin's times.

Ctrl Enter
Noticed a mistake Highlight text and press. Ctrl + Enter
We are
What are they counting on in Tatarstan, sabotaging Putin’s instructions?Foreign religious influence on the Muslims of Tatarstan in the post-Soviet period
85 comments
Information
Dear reader, to leave comments on the publication, you must to register.