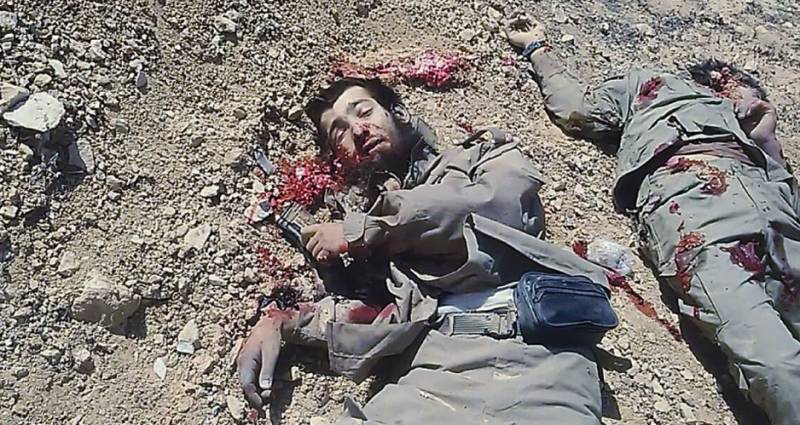 The “Islamic State”, which was banned in Russia, arose at the beginning of 2014 in Iraq, where jihadi units, building up a “new caliphate,” defeated several divisions of the Baghdad army. IG captured significant territories in the north, in the center and in the west of Iraq, and then in the east and in the center of Syria.

The fundamental difference between the Islamic State and other radical Islamic groups is that its founders did not build a networked terrorist structure, but a full-fledged state with a constantly controlled territory and all the institutions established by the country. In addition to the Iraqi Islamists, a similar experience was available only to the Taliban movement in Afghanistan in the 90-e - early 2000-x. But the Taliban were nevertheless an organization to a certain degree of a small-town, almost purely Pashtun one, which sharply limited their expansion opportunities (they could not even take control of the whole of Afghanistan). The "Islamic Caliphate" claimed control first over all co-religionists, and then over the world in general.

Initially, the armed base of the IS consisted of Iraqi and Syrian troops, previously related to Al-Qaeda, then Sunni radicals were drawn from everywhere. The military organization was built by Iraqi Sunni officers from the time of Saddam Hussein, who became unemployed outcasts due to the American policy of de-Baathing Iraq and wished to take revenge. The main foreign assistance was provided by Turkey and Qatar, through which foreign trade (primarily oil and historical values).

The role of other Arabian monarchies, as well as the United States and, surprisingly, Israel in the formation of the IG is less obvious, but, apparently, is not at all null. Sponsorship, foreign trade, the seizure of significant funds in Iraq’s Mosul, the robbery of the local population (including the direct slave trade) provided the Caliphate with a stable financial position, allowing the militants to pay a good salary and outbid them with whole detachments from Al-Qaida and the Taliban, which led to a deadly feud with these structures in the complete absence of any ideological contradictions with them. In addition, a number of radical Sunni groups from the Philippines to Nigeria swore allegiance to the IG.

The military equipment seized from the armed forces of Iraq and Syria, allowed to create a full-fledged army, in which there were at least 150 tanks, up to 50 infantry fighting vehicles, more than 100 armored personnel carriers and armored vehicles, up to 20 self-propelled guns and MLRS, about 100 towed guns, at least 80 air defense systems, including up to 10 MANPADS. Some of the oldest armored vehicles were used as martyr-mobiles: cars were loaded with tons of explosives and suicide bombers rammed enemy objects, which gave a strong military and psychological effect. Saddam's officers provided very effective command of the Islamic State Armed Forces.

Started in August, 2014, Operation “Unshakable determination” by the US Army, other NATO countries and a number of Arab states was frankly imitative in nature, without at all preventing the jihadists from expanding their territories. The purpose of the operation, as is now quite obvious, was primarily imitation, the second was to prevent the Islamists from seizing Baghdad (in 2014, such a development seemed real) and their penetration into the territory of the Gulf monarchies. The real struggle against the Islamists at that time was only the Kurds and Shiite formations supported by Iran. Exhausted in battles on many fronts, the Syrian army and the almost dysfunctional Iraqi held defenses.

The situation fundamentally changed after the entry into the war of Russia. She not only changed the course of the fighting in Syria, but gradually made it impossible for other countries to imitate the war on IS in political terms.

After the appearance of the Russian Aerospace Forces over the battlefields in Syria, the United States began to seriously help the army of this country in Iraq not only in defensive but also in offensive actions; Washington even stopped being ashamed of a de facto alliance with Iran. The apotheosis of the Iraqi stage of the war was the conquest of Mosul. It was planned to take it, no matter how ridiculous it sounds, by November 7 2016. Not to the 99 anniversary of the Great October Revolution, of course, but to the presidential elections in the United States, thereby ensuring the victory of Hillary Clinton in the presidential race. That, however, lost, Mosul was taken only in July of 2017, after which the positions of the Islamic State in Iraq weakened qualitatively.

In Syria, Washington began to seriously help the Kurds, who managed to clear the northeast of the country from the caliphates. But here the US-Kurdish contribution to the overcoming of the Islamists is in no way comparable to the Syrian-Russian-Iranian one.

After the government troops with the support of the Russian Aerospace Forces released the heroic Deir-ez-Zor (which seemed fantastic at the beginning of this year), the IG turned into a state of agony. The fact is that, apart from purely military successes, Moscow has achieved from Ankara and Doha the cessation of any help to it. This dealt a severe blow to the economic situation of the Islamists. The military organization also "fell down" as soon as it was necessary to wage a war against a strong and decisive enemy, possessing absolute supremacy in the air.

Thus, the former advantages of the “Islamic State” turned into very big disadvantages. Al-Qaida was initially focused on completely illegal network sources of funding, therefore it still exists, although not without problems. The “caliphate”, being built from the state itself, lived at the expense of external injections and exploitation of controlled lands. When both the sponsors and the territories began to disappear, it immediately became very bad with finances. And with people too. There is no doubt that the militants are well motivated ideologically. However, this motivation two or three years ago was very convincingly supported by big money and military successes. When the funds were gone, and failures began on the battlefields, everything deteriorated sharply. Even for the Wahhabi idea, it is better to die in a successful battle, and not during total flight. The loss of manpower is no longer compensated by the influx of new people, on the contrary, the rest are trying to scatter.

IG is not dead yet. First of all, because his opponents pursue different goals and vigorously compete with each other. During the Second World War, the leadership of the USSR, the USA and Great Britain perfectly understood that after the defeat of Germany and Japan they would again be on opposite sides of the barricades, but as long as there are common serious enemies, joint actions should be coordinated to the maximum extent.

Today, this is not the case in Syria and Iraq. Various coalitions, fighting against the Islamists, tend to weaken each other as much as possible, including sometimes with the hands of the same Caliphate. The Iraqi military operation against the Kurds, if one starts (possibly with the support of Iran and Turkey), can become a colossal gift for the Islamic State. In addition, in the ranks of the IG there are many fanatics who will fight to the last. Therefore, the "Islamic State" is capable of quite a long and painful snap, as it happened in late September - early October under Sukhna and Dair-e-Zor. Nevertheless, this does not change the general trend - the IS in its current form is doomed.

Of course, the surviving militants will crawl around the world (most probably will go to Afghanistan, where the Caliphaters seem to have reconciled with the Taliban), but the military and economic losses suffered by the IG are too great, they bring this structure to a lower level with a qualitative reduction in capabilities . Migration of militants in their consequences will not go to any comparison with their expansion from the controlled by the IS of Syria, if the Assad regime was defeated. Sunni extremism with the defeat of the Islamists, of course, will not disappear, but the damage caused to him is very sensitive. And the role of Russia in this is decisive.

Ctrl Enter
Noticed oshЫbku Highlight text and press. Ctrl + Enter
We are
A great interview with Sergey Lavrov: about Ukraine, Obama and IranWhat you didn't want to know about England
Military Reviewin Yandex News
Military Reviewin Google News
14 comments
Information
Dear reader, to leave comments on the publication, you must to register.