For the Nord-Ost tragedy, you need to say “thank you” to Yeltsin 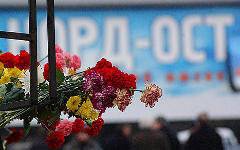 Fifteen years ago, for almost a thousand people present at the Moscow Theater Center on Dubrovka, the 57 hours of utter hell began. A group of terrorists, led by the “destroyed” Movsar Barayev, drove up the motorcade to the building where the popular musical “Nord-Ost” was taking place. Spectators, actors and employees of the theater center were taken hostage.


Today, from a height of ten years past, it may seem to someone "exciting movie." But for those who were lucky enough to survive, it is not easy to remember those days now, no matter how healer the time is. Yes, the secret services then worked the way they worked - at the limit of objective possibilities, the doctors did what they could do in the proposed circumstances (and they were offered unimportant: the lack of antidotes to gas, and it is not clear what, lack of cars, blocked entrances to the building .. .), the terrorists were destroyed and even, to the amazement of the public, they tried to continue to play the musical on the same stage (grief, and money with money). Life went on as usual, but people did not want to forget about those three days, no matter how much some people would like to.

Probably Moscow’s then mayor, Yury Mikhailovich Luzhkov, could not have imagined in a nightmare that on the eve of the tragic jubilee he would have to personally criticize the actions of the operational services to rescue hostages in the pages of the Moskovsky Komsomolets. “On the issues of emergency medical care during the rescue operation, the physicians contacted the operational headquarters. Honestly, I don’t understand in whose interest it was to hide this information, when everyone had a task (it was put that way) to rescue the hostages as much as possible, ”noted Yuri Mikhailovich and, noting the operation’s defects as a whole, complained:“ First of all the services that were supposed to provide information about the impending terrorist operation were not working. Until the moment the duty officer called me and reported the hostage taking, we didn’t suspect anything. ”

And today, the authorities no longer suspect that there are people left - relatives of those who went to the theater center for a musical performance and remained there forever. “Representatives of the city hall stopped coming to Dubrovka. Maybe there was some kind of installation to forget, not to remind. Maybe so. I do not know. It is a shame, ”Iosif Kobzon, who, with his pediatric surgeon Leonid Roshal, went to the terrorists to negotiate the release of children, sadly shared with Vedomosti several years ago with sadness.

Luzhkov himself described Kobzon’s act in an interview with MK as “brave before the absurd,” but even before Joseph Davydovich, in the very first hours of the terrorist attack, Olga Romanova came to ask for the hostages. When she learned that terrorists had taken hostages near her home, among whom there are children, she, without hesitation, ran to the theater center - to talk with terrorists who "also have children."

The gang of Movsar Barayeva did not divide Olya’s humane impulses and shot her, as she shot also the officer of the military prosecutor’s office Konstantin Vasilyev, who also rushed to help the children after learning about the incident. Vasilyev’s impulse was not appreciated not only by the terrorists, but also by the state: only two years later he was posthumously awarded the Order of Courage, and until that time the Ministry of Defense had “doubts”. Feat an officer committed "in his spare time from the service" ...

The authorities seem to understand that it will not be possible to make the people forget about the terrorist act and its “events” before and after it. But, therefore, it is possible to at least admit mistakes, to take at least part of the blame on yourself? .. With this, it is not much, but there are examples. Former head of the Duma security committee, Vladimir Vasilyev, in an interview with Vedomosti, noted that he also “bears part of the blame” for what happened at Dubrovka in 2002, since he was then deputy minister of internal affairs. “Well, we couldn't,” he stated.

Even so. At least honestly.

Those events in a conversation with a KM.RU columnist were recalled by a prominent criminalist, Lieutenant-General Alexander Gurov, who was then chairman of the State Duma’s Security Committee:

- A few days before Nord-Ost, there was an explosion at Moscow's McDonald's, the Caucasus was boiling up, the special services were mobilized, as they say, stood on their ears ... How could such a well-organized terrorist attack in the theater center happen in such conditions?

- What does “special services were mobilized”? They began to smash them from the beginning of 90's, and it lasted until about 1996-97 of the year. I personally left Lubyanka in 1994, when the fifth department reform was underway. The pseudo-democrats of the first wave did everything to destroy the special services. I am responsible for my words.

Perhaps the only thing that Yeltsin did not go for was the law on lustration for employees of the authorities; then a guerrilla war would begin.

The secret services destroyed so that, God forbid, there was no “counter-revolution”. The agent's office was also destroyed: he was tormented by constant checks, organized humiliation. And when the attacks started, everyone immediately came to their senses: where are they ?! And they are there: who is in business, who is retired.

There is a philistine concept - "Russian maybe." Maybe nothing will happen. Somewhere there - the attacks, explosions, and then - maybe blow over. And the criminal needs it: all the fools around, you can act, they will not catch ...

In Israel, the security services have long realized the danger of terrorism, an antiterrorist campaign is being conducted there, informing citizens is at the height. When an Israelite enters the store, he does not need to be asked to show the bag: he opens it immediately. He understands that this is necessary, and does not consider it humiliation.

We then just simply were not ready for such challenges. Even now we are not particularly ready, although with vigilance, of course, it has become better.

And you can not discount the lack of discipline, corruption in the bodies. Already after the terrorist attack, I remember, they condemned one major, who clearly saw that some suspicious people were hanging around not at all of European appearance (it’s not about the appearance as such, but about signs): there would be at least no verification of the documents! It seems there even gave a bribe - for sure it was.

And under such supervision, the terrorist group continued to build its nest, preparing for the terrorist attack. Here are the circumstances - the destroyed system, “maybe” and disorder with corruption, which eventually played into the hands of those who plotted the attack in the theater center.

And today, journalists often ask me questions: “And what has changed?”, “Are we ready today for such challenges?”. But what does “ready” or “not ready” mean? No one will give one hundred percent guarantee that this will never happen anywhere else. In no country, no one will give an absolute guarantee. But the probability of repeating that tragedy now, of course, is minimized. Over the past decade, more than a thousand militants were destroyed, and the main headquarters of gangs were defeated. And in Chechnya, no matter how we criticize Kadyrov, but let's be honest, order. In Chechnya, the situation has returned to normal. Yes, another thing is that such a price, but it is - a topic for another conversation.

Today's special services and police special forces, again, compared with what was before, are heaven and earth. Gained professionalism, restored agent networks, without which - nowhere.

“Many years have passed, and the debate about how to properly rescue the hostages has not ceased until now ...”

- According to some liberal talkers, it was not necessary to eventually go to the assault: it was necessary to follow the instructions of the terrorists and thus save lives. And the demands were to withdraw the troops - no less. But imagine: a plane with several hundred passengers is flying towards New York or Washington, and the American special services are receiving information that a terrorist attack is being prepared with its help. The plane would have shot down. There is a concept of extreme necessity, which is reflected in the legislation. By causing less harm, we prevent more harm.

To those who stormed, there are no complaints: they are heroes. They acted correctly. The order for the assault was given correctly, and there was no objective way to use a sleeping gas, at that time it was not objectively: otherwise, the theater center would simply take off.

Yes, of course, those who went to negotiate with terrorists helped the cause. They are great, they helped. But let's be honest: they still could not somehow qualitatively influence the situation, dissuade the terrorists, save all the hostages. They distracted them - it was important, they were great, but the situation still needed to be resolved radically, and the use of a special gas was the only way out, I understood that too.

Some say: well, that the terrorists did not blow up the building when the gas went? But the gas is not French perfume, its concentration was calculated to put the terrorists to sleep before they realize that something is wrong.

But with the implementation, of course, hurried, could not distribute antidotes, warn doctors, conduct a normal evacuation and assist. I think the victims would be minimized. This is a mistake, if not a pure crime. After all, if we are preparing such a difficult special operation and we understand that people may suffer there, we need to foresee everything to minimize the harm.

Now they are justifying that, they say, there were antidotes, but they did not have time to distribute them. These are all empty excuses. And the point is not whether gas has been classified or not. Even if they declassified: if there are simply no antidotes, what can doctors do? The proper instruction of the doctors was not carried out, and after all they were preparing for the operation, studying similar objects ... That is, the decision to start the gas was not made in a hurry, not an hour before the assault - it was worked out. Worked out all that is possible, but missed this moment. And this manifested the abominable attitude of the authorities towards their own population.

Ctrl Enter
Noticed oshЫbku Highlight text and press. Ctrl + Enter
We are
What you didn't want to know about England10 years passed since the terrorist attack on Dubrovka
Military Reviewin Yandex News
Military Reviewin Google News
63 comments
Information
Dear reader, to leave comments on the publication, you must to register.