October 26 2017
25
In his previous article on the attempts of the Flemish "right" to hold a referendum on the independence of Flanders, one of the commentators became interested in the fate of Bavaria. Calm down. Everything is normal - absolutely mirror situation. As I wrote earlier, Mariano Rajoy (Chairman of the Government of Spain) planted a pig for the EU. Instead of drowning the Catalan referendum in a bureaucratic talking shop, economic horror stories and promises of heavenly life in the event of a “right” decision, Raha, in a manner of speaking, struck across Catalonia. Thus, he started up so extensive circles in the peaceful bureaucratic swamp of Europe that the “separatists” of all stripes revived. It gave them a boost.


Of course, one should not think that all this political “movement” arose from scratch simply because of the petty vibrations of obstinate Catalans. Not. These guys peacefully (and not very) fed at the trough of parochial patriotism and "village" swagger for quite a long time. And no matter in which part of Europe these "wrestlers" live. Their methods of agitation, arguments, claims to the central government and others are similar as similar triangles. It is a question of Flanders, Catalonia or Padania (Northern Italy) - it does not matter, only the national color changes.

Bavaria is no exception. In this federal state of Germany, the Bavarian party (Bayernpartei) is mainly responsible for “separatist” sentiments. Sometimes it is viewed as the successor to the Bavarian People’s Party, which did not survive Hitler’s rule and the Second World War. By the way, the second successor is considered to be the more powerful Christian-social union (CSU), but he stands on the more moderate positions of regionalism, but politics is changeable. Therefore, it is the Bavarian Party that occupied the niche of the independence of Bavaria and secession from Germany. Despite its small number and lack of representation in the Bundestag, the Bavarian political party is a longtime political resident of Germany. It is regularly represented in the Landtag (parliament of the land) of Bavaria. 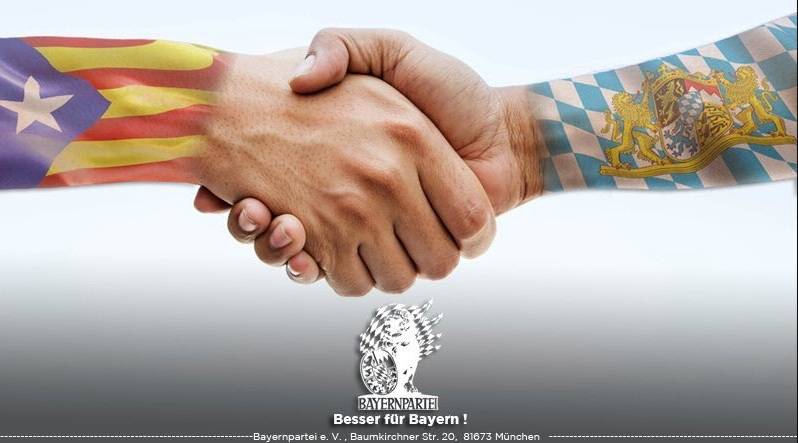 And, of course, the Bavarians were no worse than their colleagues from Flanders. Do not have time to get off the bluish bumps from the Catalan heads, as the head of the Bavarian Party, Florian Weber made an emotional and unequivocal statement: "This (Catalan referendum) is an inspiration for Bavaria!"

However, as I indicated earlier, it is not worth thinking that these comrades came out of a coma only after the Catalan crisis. In all sorts of Internet resources (from sites to Twitter), Bavarian “separatists” with amazing constancy sneeze Berlin and the Bundestag. In this case, as befits a party of this kind, the argument in favor of the independence of the region is divided into two peculiar levels.

Level one. Most often, this level serves as a digestible packaging for true prosaic reasons for independence (making up the second level). At this level, the reasons for self-identification, national identity and way of life are cultivated, i.e. region is spiritualized-intangible. This often serves as a beautiful moral disguise for the completely mercantile foundations of independence. 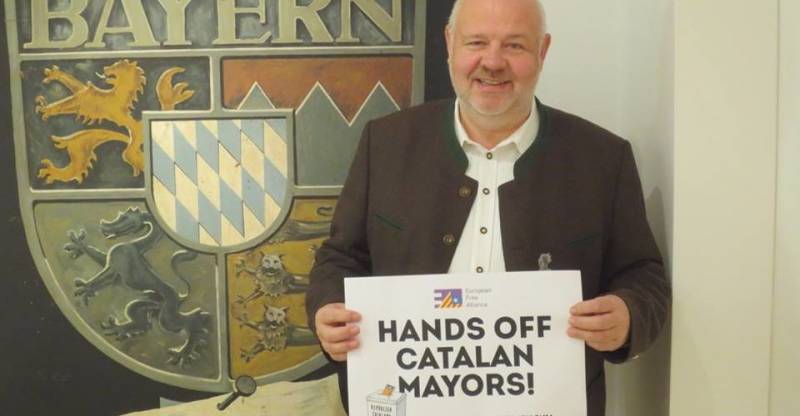 Florian Weber with a characteristic poster - "Hands off the Catalan referendum"

In Bavaria, there is real openness in this matter. The duchy of Bavaria, which appeared around the 10th century, has considerable experience of statehood, despite all historical collisions. Later, Bavaria is part of the Holy Roman Empire, preserving its duchy, characterized by strife and other cute details. After the Napoleonic Wars, with the consent of the victors, Bavaria becomes a kingdom. The “collector of German lands” Otto von Bismarck put an end to this independent lawlessness in 1871. The kingdom became part of the German Empire, and in 1918 the title of King of Bavaria was abolished. The family of the Wittelsbachs, who ruled Bavaria for centuries, was also inhibited. Ironically, Ludwig II, the "eccentric romantic", as described by mannered nature, became the most famous representative of the genus in the modern hysterically-glamorous society. In life, Ludwig II, between bouts of sluggish psychosis, devastated the country by building very beautiful and absolutely useless castles until he was finally removed from power.

Moreover, apart from the small nuances of national identity, such as local holidays and leather pants with suspenders, the Bavarian language becomes a monumental argument of the Bavarian independence supporters. Despite the fact that this "language" is in fact quite far from the generally accepted German language, it is still considered a dialect. But if the South Russian dialect, popularly “surzhik” or “balachka”, can be dragged to the rank of “sovereign mova” with a wild squeak, then God himself ordered the Baerish (Bavarian dialect).

Level two. But at this level the most objective and vital reasons of separation are based, ready to touch the quick, i.e. for a pocket, even citizens far from a national question. Thus, the Bavarian Party does not tire of stressing that billions of euros annually leave the federal land of Bavaria and are sent to feed the less prosperous regions of Germany in the form of subsidies, including to Berlin. Do not forget the Bavarians to remind Berlin of the excessive waste of funds for the maintenance of the bureaucratic apparatus. 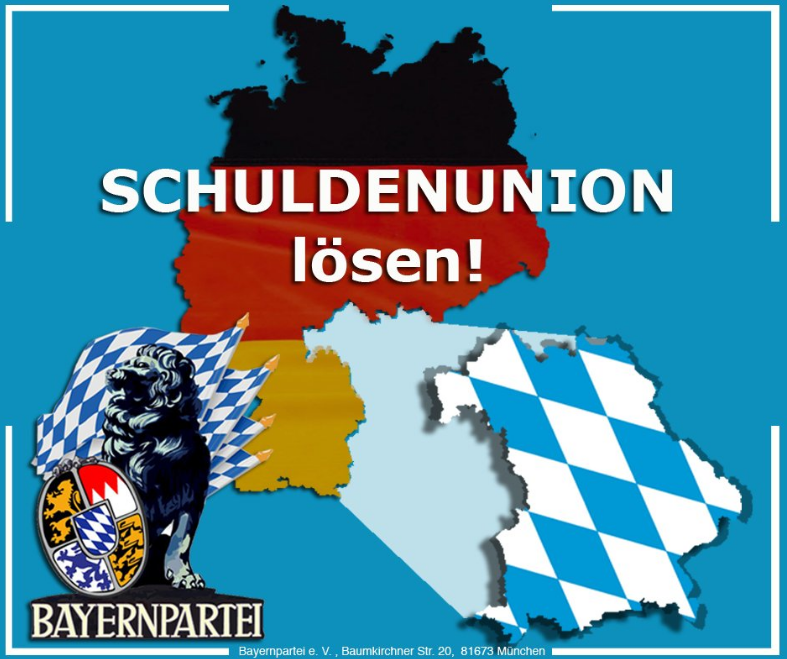 Poster of the Bavarian Party with a lowered Bavaria

Last month, it became generally known that 41% increased the cost of maintaining the staff of the Ministry of Family Affairs, and the bureaucracy itself was very swollen. The reaction of Florian Weber was not long in coming. He stated that this was not just an isolated case, but a negative self-service policy of Berlin.

However, it would be wrong to consider the Bavarian Party a monopolist in the criticism of Berlin. Horst Seehofer, a completely legitimate and far from marginal, Bavarian prime minister and leader of the aforementioned CSU, periodically raises his voice towards Berlin about “dishonest redistribution of funds”, and also suggests reducing extortions from his land.

And with much greater feeling and far-reaching conclusions, Bavarian intellectuals come out. For example, the writer Wilfried Sharnagl, more or less well-known in Russia, by the way, a prominent member of the CSU, a few years ago released the voluminous work "Bavaria can also be an independent state." The name is ambiguous, as if the author is trying to draw parallels and add Bavaria to a peculiar family of "separatist" regions of Europe, such as Catalonia, Flanders, Padania, Veneto, Scotland, and so on. 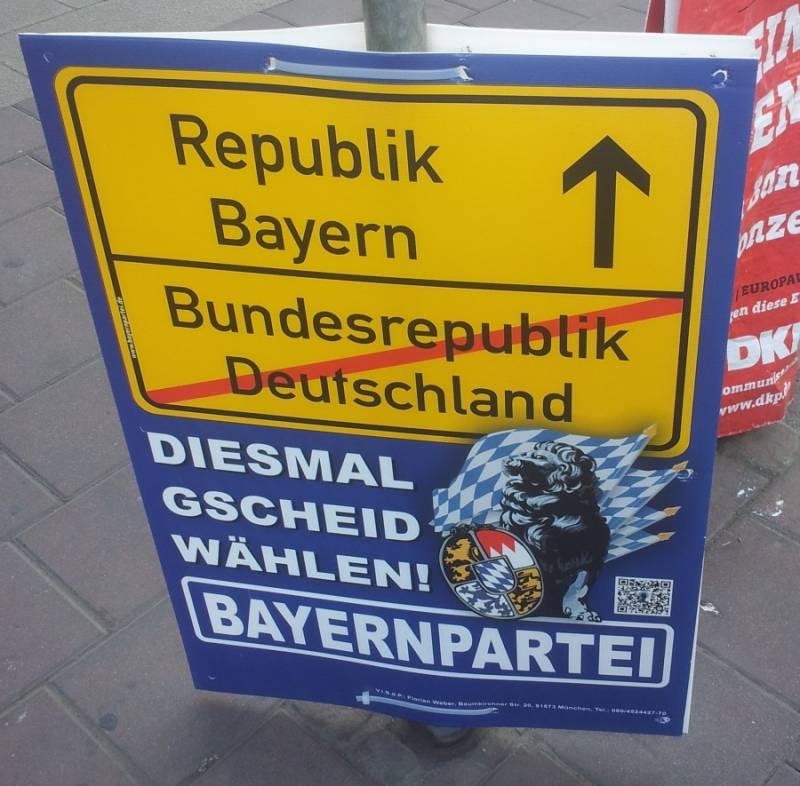 "Federal Republic of Germany" - crossed out

The official authorities in Berlin continue to stoically ignore the Bavarian processes, only occasionally, in a manner resembling “separatist” sentiments, to use terms like “untenable nonsense.” This practice is quite acceptable, as it allows the media to distribute kicks to dissenters and marginalize unwanted alternative parties. Thus, the propaganda leaflets of the type of Deutsche Welle, which function so stereotypically “according to the training manual”, that one gets the impression - shake them and a notebook in the style of “Mao's quotation book” pops out from behind the bosom.

For example, Wilfried Sharnagl, already known to us, in 2015, published the book “Over the Catcher”, published in Russia under the name “Change of Course”, in which the author tried to objectively examine the Ukrainian crisis and relations with Russia. It cost the book to get on the counter, as the same Deutsche Welle first tried to discredit the author as an amateur in this matter, and then completely filled all the materials on this subject with a set of hysterical labels about the “muzzle of automata”. 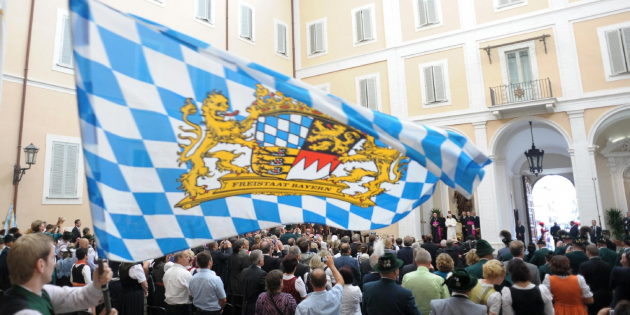 How long such a policy of the authorities and the annoying hissing of the German media will be tolerated by a Bavarian burgher is hard to say. But while it works, and the ostrich head in the sand feels comfortable, Berlin risks getting to know better not only the “Alternative for Germany” (which threw Berlin bureaucrats into shock at the last election), but also such parties as the Bavarian.

Ctrl Enter
Noticed a mistake Highlight text and press. Ctrl + Enter
We are
Catalan TrampetzCatalonia: the beginning of the "parade of sovereignties" or a fight of elites for privileges?
25 comments
Information
Dear reader, to leave comments on the publication, you must to register.