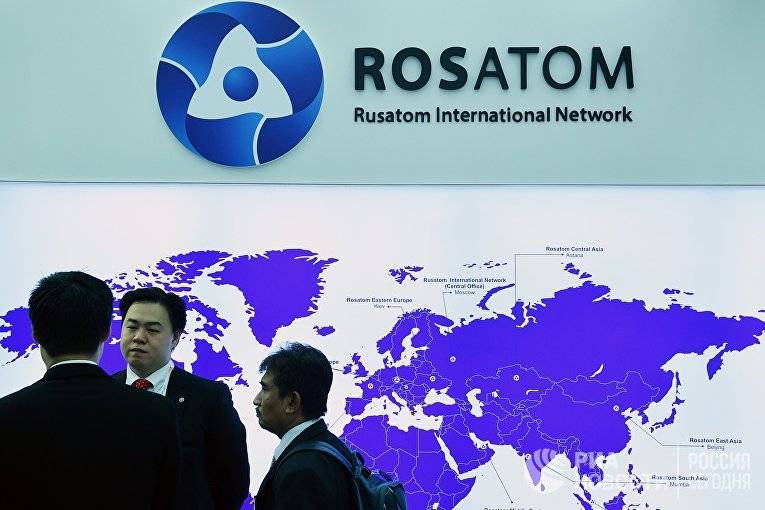 In Germany, nuclear energy has no chance. After the accident at the Japanese nuclear power plant Fukushima, the abandonment of nuclear energy is an issue that has been resolved, and the last reactor will be shut down in 2022. German concerns, in particular, Siemens, have already left projects in this industry. Yes, and other countries are tormented by doubts: if the Japanese, who are well versed in technology, did not cope with the risk, then who is able to cope with it?

All this, however, does not apply to Russia. Immediately after the Japanese catastrophe, President Vladimir Putin said that Russian NPPs are safe and the country will systematically implement its atomic program. Less than a week after the accident at Fukushima, an agreement was reached on the construction of a new nuclear power plant in neighboring Belarus (which, by the way, was badly hit by the Chernobyl disaster), which was promised Russian loans for these purposes. Until now, this calculation has been justified: since 2012, the global consumption of nuclear energy is gradually increasing again. And in the 2016 year, according to the IAEA, a new record of all time was set in the amount of 392 gigawatts.

The Agency's forecasts are twofold: with an optimistic for the industry, power scenarios for 2030 will increase by 42%, and by 2050 and by 123%. In the worst case, by 2030, there will be a fall of 12%, and by 2050, the current level will again be reached. However, according to the IAEA, the Paris Climate Agreement could play a very important role in the construction of new reactors, which should gradually replace fossil fuels.

One of the main beneficiaries of the revival of nuclear power is the Russian state concern Rosatom. 35 reactors in the country produce 18,3% of all electricity, and this share should continue to grow. A few years ago, Putin outlined the goal: 20-30%. Powerful investments have come to the industry. Currently, construction of eight nuclear blocks is underway, construction of another eleven is on the list.

There is a development even floating NPP. Baltic states are also important prospects for the Kaliningrad NPP. Local residents and authorities are opposed to Moscow’s plans, but they are betting on the export of energy to be produced there. It is assumed that this energy will go not only to Estonia, Latvia and Lithuania, but also to Poland and Germany. Arthur Boroz, director of Atomenergosbyt, Rosatom’s subsidiaries, calls NPP a compromise solution for the entire region, which “guarantees the stability and safety of power systems without additional financial burden on consumers in the EU.”

In Moscow, the atomic monopolist has full support, and the long-term head of Rosatom, Sergei Kiriyenko, has recently been promoted to head of the Kremlin administration, which is using Rosatom for external expansion purposes. At the same time, the concern fills niches that have been freed up after Germany’s withdrawal from nuclear energy.

In particular, in the north of Finland: construction of the Hanhiviki reactor with a capacity of 2018 megawatts should begin there in 1200. When the work on this project was just beginning ten years ago, the EON concern also planned to take part in it. Now, his share has passed Rosatom. The cost of building a nuclear power plant is estimated at seven billion euros. From 400 to 500 millions was laid out before the start of construction. Since the Russians have already received 34% of the design company Fennovoima, they will also be involved in construction costs in appropriate amounts.

For Rosatom, these investments are not a problem: its available funds in 2016 were estimated at 4,4 billion dollars. The concern is the world's largest exporter of nuclear power plants. Last year, the state holding increased its “order book” by 20,9% to 133,4 billion dollars. In June, he received another order at the St. Petersburg Economic Forum: India ordered two additional reactors for the Kudankulam NPP from Moscow. Thus, Rosatom's order book reached the 36 reactors. For comparison: the main competitor of Westinghouse (USA) has only seven orders, and the French company Areva is only five.

Asia is the main market for Rosatom, and Kudankulam is the largest nuclear power plant the company is building. If, by 2025, all of its nuclear units are built according to plans, it will become the largest nuclear power plant with a capacity of 6000 megawatts in all of Southeast Asia. Although the nuclear power plant is located near the south coast of the country, the operator has no concerns about safety. “This is the safest nuclear power plant in India,” Kiriyenko said on this issue. Given the ever-growing energy consumption, Asia is the main market for Rosatom. And in the face of the Russian-Chinese investment fund for regional development, Rosatom in early August received a powerful partner from the Middle Kingdom. The companies have entered into an agreement on the financing of Rosatom's foreign projects.

The most controversial is the contract with Iran. The United States recently tightened its sanctions against Tehran, but it did not make any impression on Russia, which itself suffers from sanctions. After the Bushehr NPP, construction of at least two new reactors is planned. Rosatom is not to be afraid of any consequences. On the contrary, theoretically Russia could even introduce its own counter-sanctions and limit the supply of enriched uranium to the United States. After all, 30% of American NPPs depend on it. This would have been a serious blow to the United States, but could have cost Rosatom several attractive contracts. Therefore, Moscow has so far only indicated the potential possibility of taking such measures.

Ctrl Enter
Noticed a mistake Highlight text and press. Ctrl + Enter
We are
A great interview with Sergey Lavrov: about Ukraine, Obama and IranWhat you didn't want to know about England
15 comments
Information
Dear reader, to leave comments on the publication, you must to register.