Mihomaydan was blown away, but clowns are still 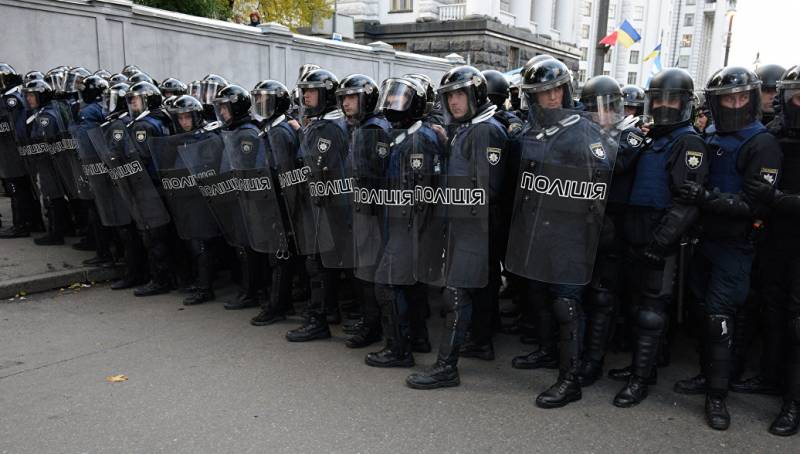 Kiev Maidan behalf of the ex-President of Georgia Mikhail Saakashvili was blown away. Petro Poroshenko, having paused and not allowing the enemy to gather strength, went on the offensive and can now calmly look at the wretched spectacle that still remains under the walls of the Verkhovna Rada and his administration. Mikhomaydan is no longer dangerous for him, and this is already obvious even to those who started it.

Let's try to figure out why Mikhail Saakashvili did not manage to shake the population and why Petro Poroshenko, having a rating close to the plinth, stood up and now literally sneers at his opponents.

So, in less than a week, the next Ukrainian nedomaydan was blown away and marginalized. And this despite the most powerful informational and organizational support from the United States, which were ready to help the “opposition” today, just as it did in 2013.

According to eyewitnesses who saw the organization of the event in 2013 and 2017, the latter was provided with everything necessary at the highest level, even better than the previous one. Some of the tents for the protesters were packed with 700 pieces, and emissaries with suitcases of money, indulgences and promises of all sorts of tasty buns from the American government in the future traveled to the regions.

Why did it happen? It seems that the leaders were the same and the main customer (USA) is the same, and the problems now in Ukraine are about the same as in the 2013 year. But an explosion of discontent did not occur, and the government without much effort coped with the protest.

You can hear this explanation: Americans did not give up cookies. I do not agree. Actually, the Americans paid for clowning Saakashvili, and also conducted a real artillery preparation in their media, pouring mud on Petro Poroshenko and accusing him of everything that could be: corruption, selling North Korean rocket engines, etc. That is, they did exactly the same thing as in the 2013 year. But Kurt Volker did not appear with sandwiches under the Mariinsky Palace.

I think the main mistake of Saakashvili and the Americans behind them was the wrong choice of the main direction of the buildup of the regime. Washington, like four years ago, put on corruption and the fight against it, without realizing that over the past four years, significant changes have occurred in the minds of Ukrainians. And they did not put on those "activists" ...

Ukrainians will not be surprised for a long time. Americans can not understand that the Ukrainians are not Europeans, and it makes no sense to apply European templates to them. Moreover, they are not even the Ukrainians who were in 2013 year. In their country, with a light hand of Americans, the war began, and the regions swept the real gangster lawlessness.

People are being killed right on the streets, and a whole caste has been formed in the country, with which even very serious crimes get away with. Moreover, it was these very “untouchables” that 2017-th came to the Maidan in October.

I can imagine the feelings of people waiting for Poroshenko to finally take on his immediate responsibilities and spread the forgotten fear of “patriots” on asphalt.

Not smeared, but did not succumb. It was because of mistakes in the planning of the protest that Mihomuidan did not support the population. And if we remember, Victoria Nuland appeared on Maidan with cookies only after a mass dissatisfaction with the dispersal of December 12, 1 2013. And just this explosion did not happen. Not found in the team of Petro Poroshenko of his Sergey Levochkin.

But at the same time, the population of Ukraine did not hurt for living and corruption, nor the promise to fight it. People do not believe in it, and this is not so important to them. People need peace and the return of stability to Ukrainian society. At any price. People are tired of war and mess. And this is exactly what Saakashvili and the clowns who came out on the Maidan forgot to offer the Ukrainians. Yes, and could not, because they themselves are the source of these problems.

Saakashvili and the team were not able to shake things up because they were not supported by the Ukrainian elites and oligarchs. Yes, among them there are those who are dissatisfied with the regime of Poroshenko, since he pushed them away from the trough. But none of them in sober memory and common sense will raise their hands on the foundations of the current Ukrainian state. They are ready to change Poroshenko at the trough, but they are not ready to break the trough itself.

And it was already visible on the first day of the “Maidan”, when none of the significant Ukrainian politicians and leaders of the “opposition” factions took the podium. And this is a very important marker for Ukraine.

In general, the current nezdomaydan showed that significant changes have occurred in Ukrainian society, and even the Americans cannot ignore them. Poroshenko won this fight with them and proved that he is not Yanukovych and we must negotiate with him, and not try to bend.

If the Americans understand this, then they have a chance to start a new game in Kiev, if not, the Kiev regime will move away from them, so much so that sooner or later it will nail it to the other bank. For many, such a scenario today seems impossible and unnatural, but personally it doesn’t surprise me since 2015, when it was first noted that President Poroshenko began his game, and this game is not coordinated with the US State Department. At least in some of its most important parts.

The farther, the more obvious it becomes that the Americans are losing their influence in Ukraine. And when this influence falls to a certain critical value, then the situation in the country will begin to change rapidly. According to my calculations, this may well happen already in 2019-20, when everyone in the United States will again be busy with elections, and Moscow will finish preparing for its return to Ukraine.

Ctrl Enter
Noticed oshЫbku Highlight text and press. Ctrl + Enter
We are
Paradoxes of Georgia, or the Red Card to Mikhail Saakashvili from the Georgian peopleSaakashvili leaked, or Bog for Bidziny
Military Reviewin Yandex News
Military Reviewin Google News
24 comments
Information
Dear reader, to leave comments on the publication, you must to register.