"They worshiped the bull!" The most developed Mediterranean civilization of the Bronze Age (part three)

October 26 2017
144
So, the most important conclusion regarding the origin of the Minoan civilization is this: the Early Minoan culture is not directly related to the Neolithic culture of Crete, but was brought by newcomers from Asia, from the east, through the lands of Anatolia. In Mesopotamia, for example, there are numerous analogues of the Minoan culture. 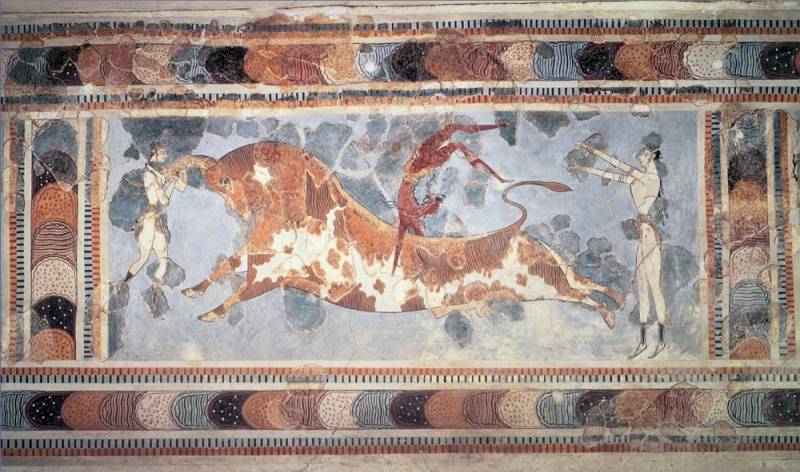 Wonderful murals depicting acrobats — young men and women jumping through a fast-moving, long-horned bull — were found in the Palace of Knossos. They are all dressed the same — a thigh tie, a metal belt at the waist. Images emphasize their dexterity, flexibility and fearlessness. The width of the chest, the thinness of the waist, the muscles of the arms and legs are also underlined. Apparently, all this was considered a sign of beauty. As to the meaning of such dangerous exercises, it is obvious not only a spectacular, but also a sacred meaning. Interestingly, among the many Cretan frescoes, only these acrobatic scenes are distinguished by such vital truthfulness as the frescoes, which depict nature. The rest contain much more convention. 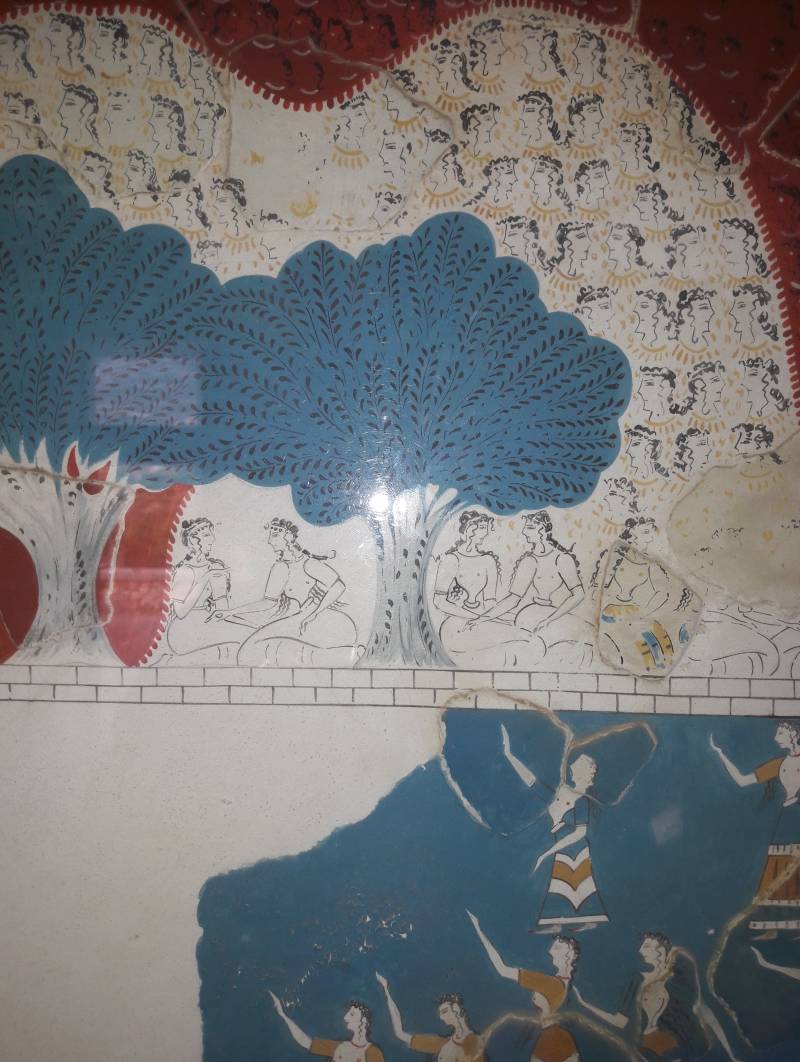 However, any frescoes of Knossos are beautiful in their own way. How many here, for example, we see female figures and after all they all ... are "Parisians"! 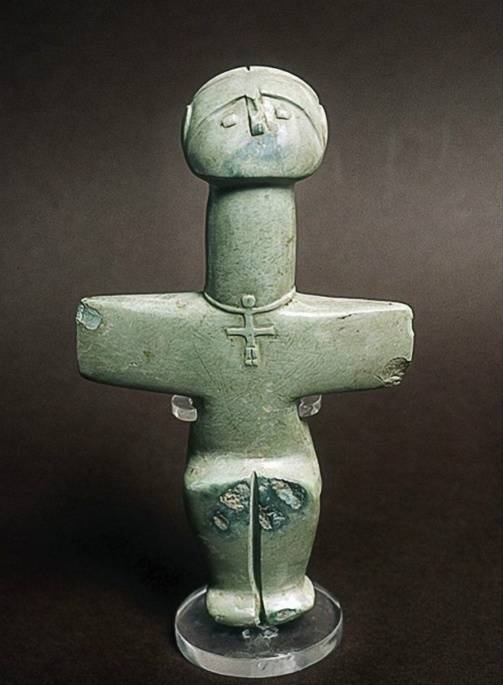 Pomossky idol of the Aeneolithic. (Benaki Museum in Athens) 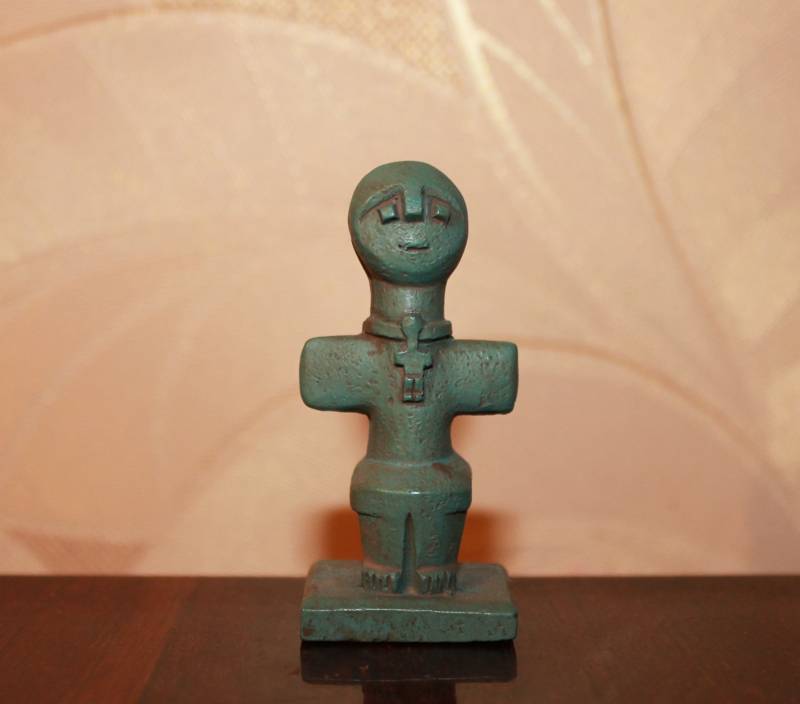 My own Pomos idol from the island of Cyprus. (Original in the Archaeological Museum of Cyprus in Nicosia) It is obvious that the area of ​​their distribution was the whole territory of the Aegean culture.

It can be considered proven that in the third millennium BC. er Minoans have already sailed to Sardinia. In any case, the ancient tradition says that the Sardis came from Crete, but on this island so many cultures have changed that it is impossible to isolate the Cretan. 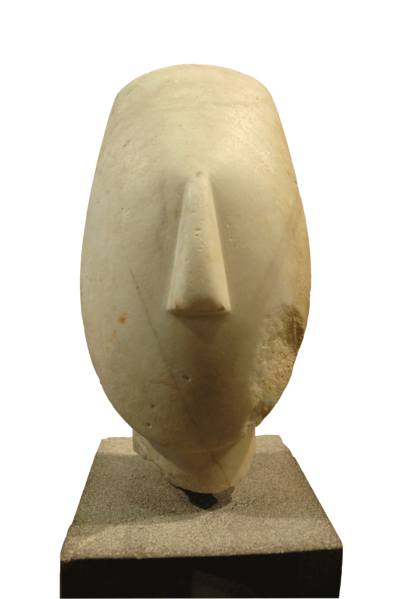 The origin of the Minoan (Etheo-Cretan) language is still a linguistic riddle. The fact is that the Cretan letter is only partially decoded. This allowed to determine only some of its morphological indicators, so that it can be argued that it does not belong to Indo-European, nor is it related to Etruscan. As before, so that there would not be claimed all sorts of speculators on stories, can not be deciphered Phaistos disc, and all the texts written "linear letter A". 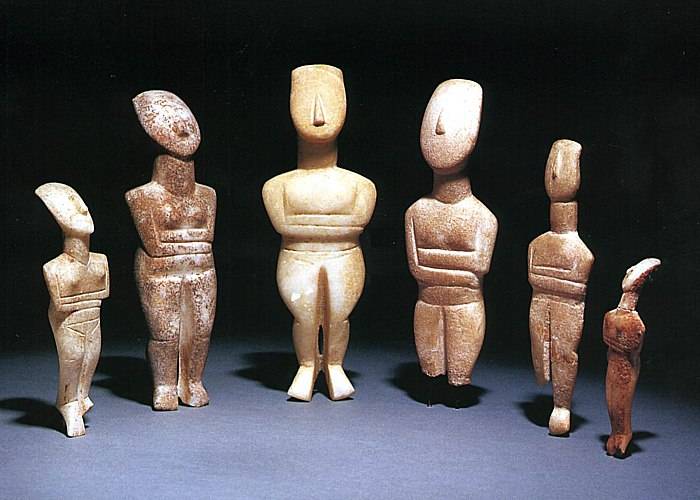 Marble female idols of canonical type from the Cycladic islands. The largest has a height 18.5, see. (Museum of Cycladic Art, Athens) 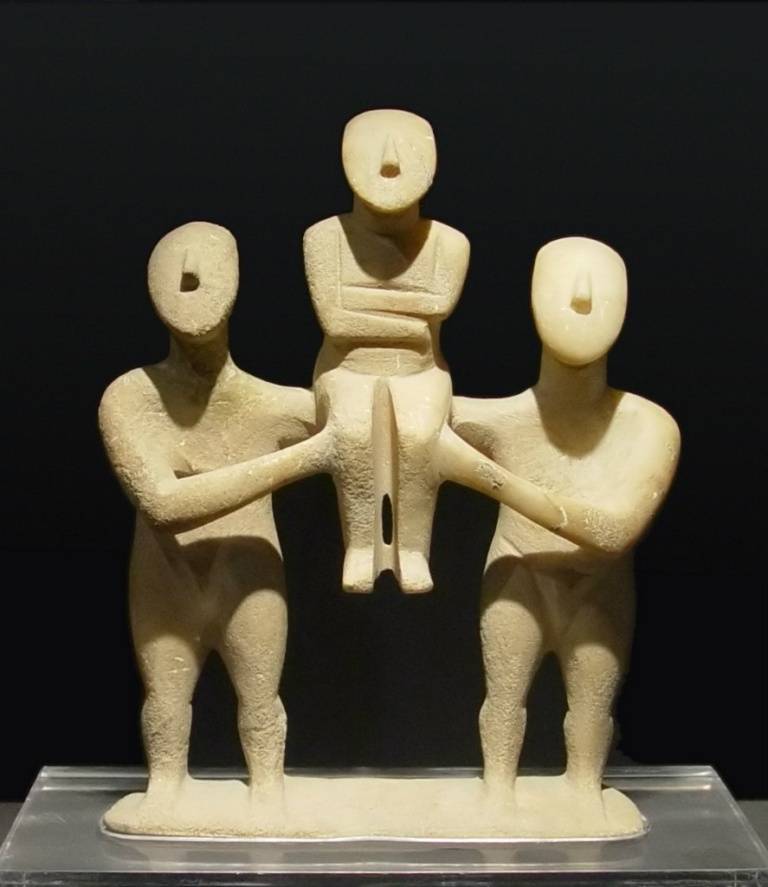 A group of three marble idols. Found on Crete in Tekka near Knossos. (Heraklion Archaeological Museum)

It is interesting that for many years ancient Egypt was an ally of the Minoans. And on the contrary, their contacts with the opponents of Egypt (the same Hittite kingdom) are not recorded.

It is known that immigrants from Crete also settled in Cyprus. And no wonder why - there are rich deposits of copper ore. The Cretans also colonized a number of islands of the Aegean Sea (for example, the same Cyclades), but then their expansion most likely met with resistance from the Pelasgians. But contacts with Greece were established after the Achaeans seized Crete. Before that, she seemed to be of little interest to them. 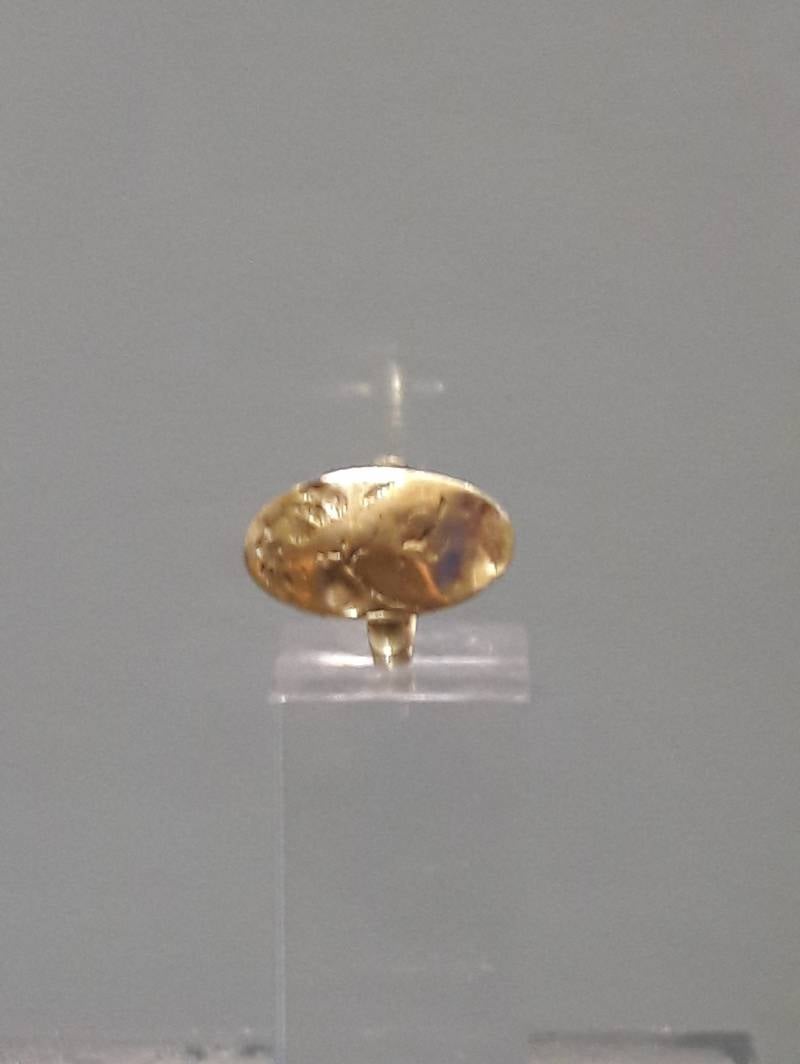 The so-called “ring of King Minos” (1450-1400 b. BC). Unfortunately, it turned out a little bit sharply. (Heraklion Archaeological Museum, Crete)

But it is known that the Minoans traded with Ancient Egypt, and exported copper from the island of Cyprus. Egyptian borrowings are visible, for example, in architecture, where Cretans began to use a column after the Egyptians. But religious minarets, unlike the Egyptians, were not built at all. All their religion, apparently, was carried out "on the street" or, as a last resort, within the walls of the palace. The ability to build multi-storey buildings, up to five floors high, suggests that they managed to develop the knowledge of an earlier era, and to use what they saw in Egypt creatively. 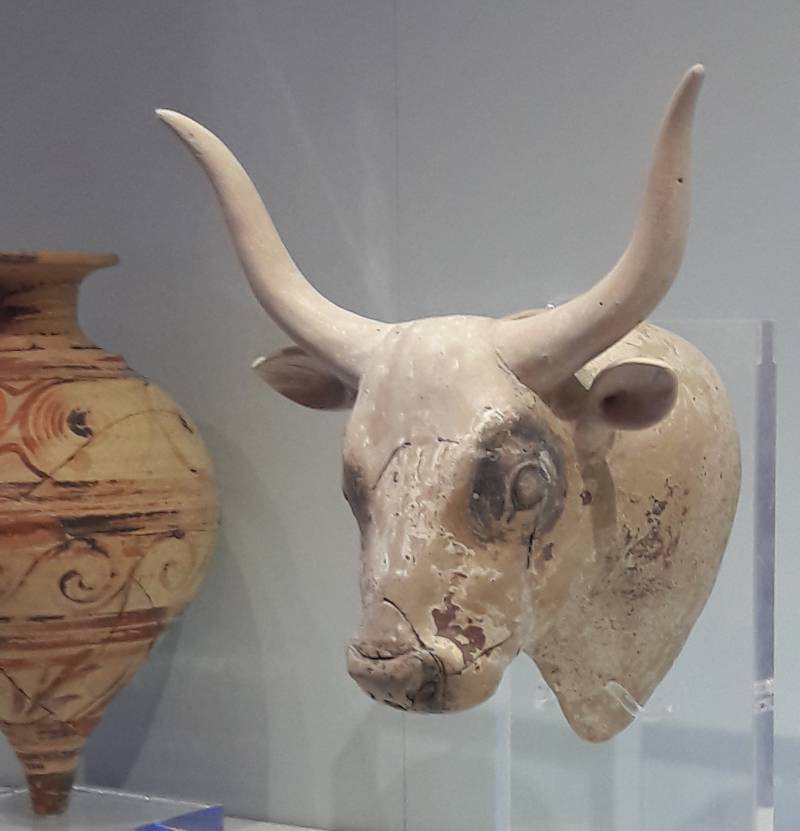 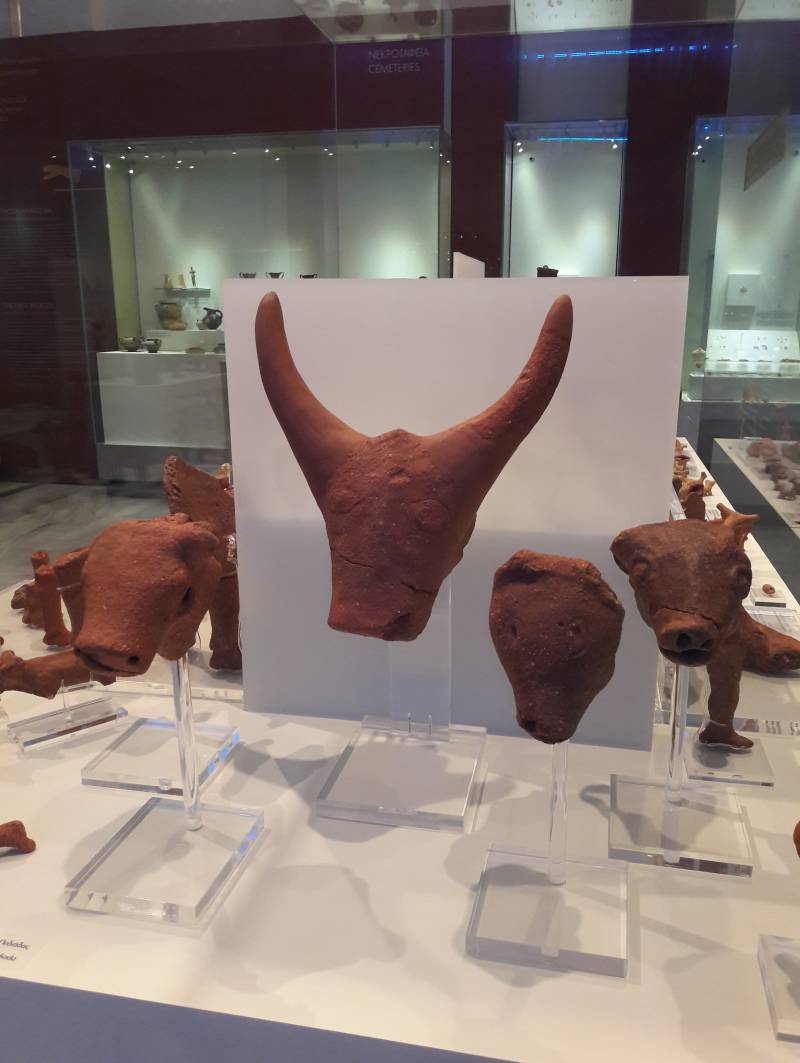 Some are very beautiful, and some are made in haste - the main thing is to look like a bull. (Heraklion Archaeological Museum, Crete) 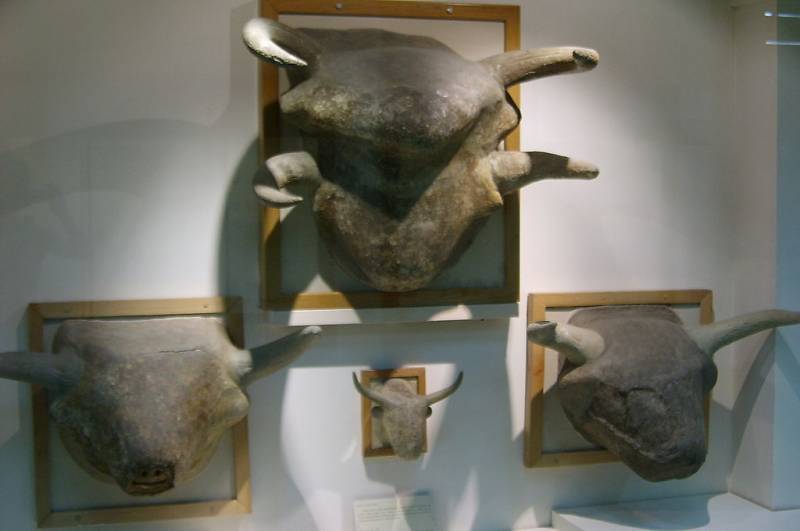 And this is bull heads from Chatal-huyuk. (Museum of the Anatolian civilization in Ankara).

But the Minoans proper beliefs differed very strongly from the Egyptians' beliefs. The Egyptians lived for the sake of death and directed all their thoughts to ensure themselves afterlife in the kingdom of Osiris. The Minoans had a cult of the bull. The essence of the ritual was the ability to jump over the bull or make a stand on his back. Honoring the bull and playing with the bull was typical of the peoples of ancient Syria, the Indus Valley, and is still preserved in Spain as a bullfight. 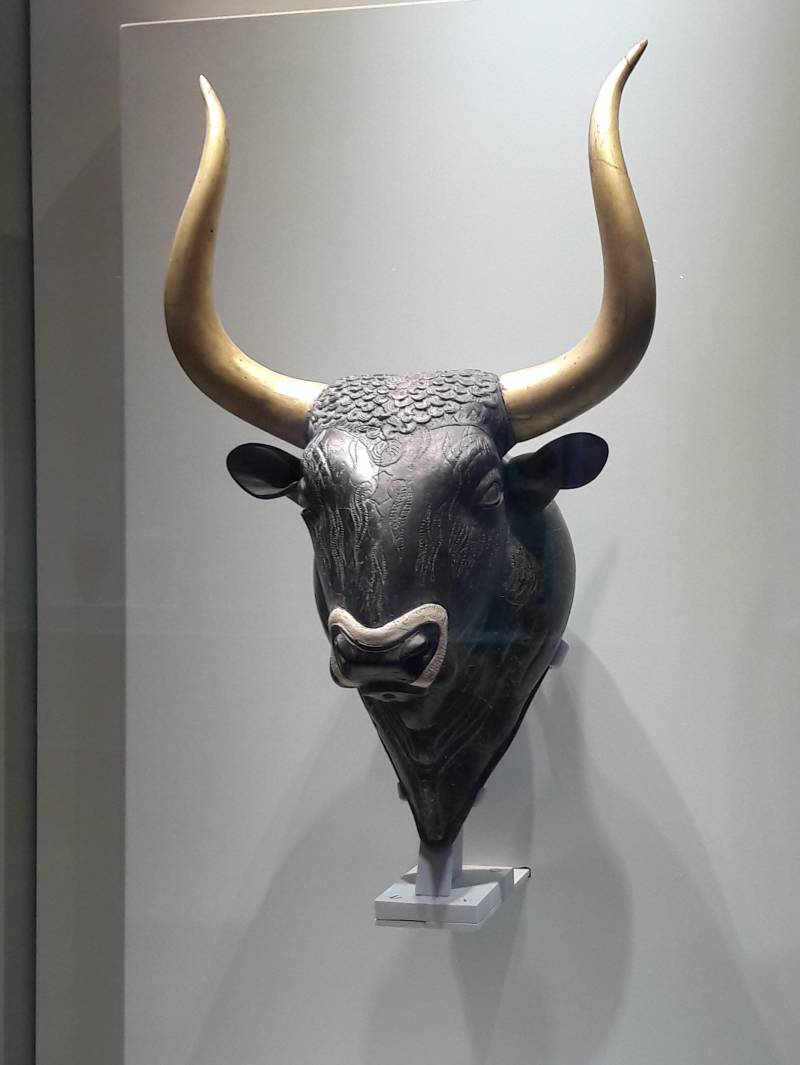 The sacred vessel in the form of an ox head from the island of Crete. Stone (black steatite), gold. Eyes from rock crystal. XVI century BC, that is, it 3600 years. By the way, this particular vessel served the artist Serov as a prototype of his bull-Zeus. (Heraklion Archaeological Museum, Crete)

Archeological data also suggests that in the Minoan religion (as in other areas of life), women could play a dominant role. For example, they were priestesses of the Goddess with snakes, whose figurines were repeatedly found on Crete. There is a hypothesis that the bull personified the Cretan men, and the serpent - the female. But is it impossible to verify this, and all attempts to "recreate" the Minoans religion, as well as the statements that someone has already succeeded in this, are pure speculation designed for the profane. But the most popular motif in the late Minoan era in the design of ceramics was the image of an octopus and ... what does this mean, or what does it say? 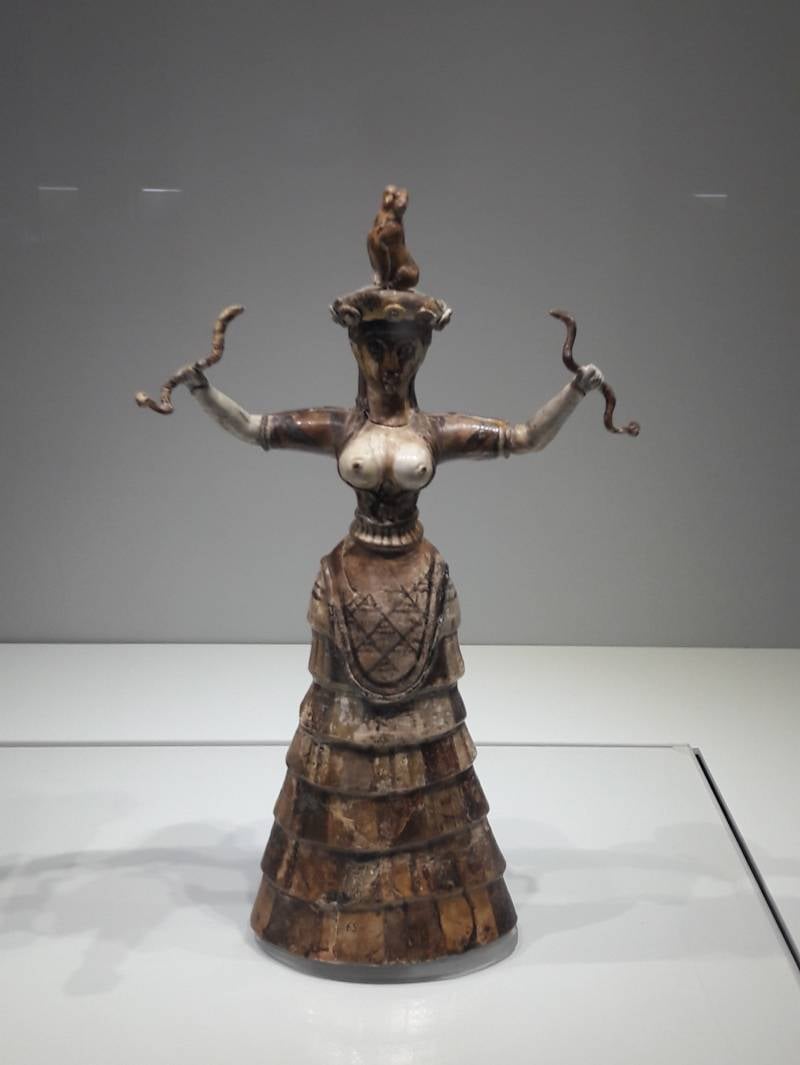 The famous Cretan "Goddess with snakes." Height 34,3, see Faience. Ok.1600 BC. Statuette of the Archaeological Museum in Heraklion.

Today, historians can not do without the data of genetics, and this is what their data says: the population of Crete by the male line was associated with people - carriers of the Y-chromosome haplogroup J2, and its maximum concentration is still observed in Crete. Well, and its carriers have their roots in the western regions of Asia Minor, from where its carriers moved to the island in the middle of 3 millennium BC. er

With regard to mtDNA research, it turns out that the ancestors of the Minoans along the female line are not natives of North Africa, say, from Libya or Egypt, but the Europeans who arrived in Crete about 9000 years ago from the Peloponnese. This proves the Minoans inherited through the maternal mtDNA line, which is also found among modern inhabitants of the island. The majority of Minoans had mitochondrial haplogroups H (43,2%), T (18,9%), K (16,2%) and I (8,1%). The time difference clearly indicates that there were two waves of settlement of the island, and not one. And from the same way, by the way, such an important conclusion follows that the mysterious Phaistos disc cannot be written in Slavic, because its speakers were simply absent in ancient Crete. The latest studies, literally just that, that is, in the 2017 year, show that the inhabitants of the island have Y-chromosome haplogroups J2a1 (n = 3) and G2a2b2 (n = 1) and mitochondrial haplogroups U, H, X, K. 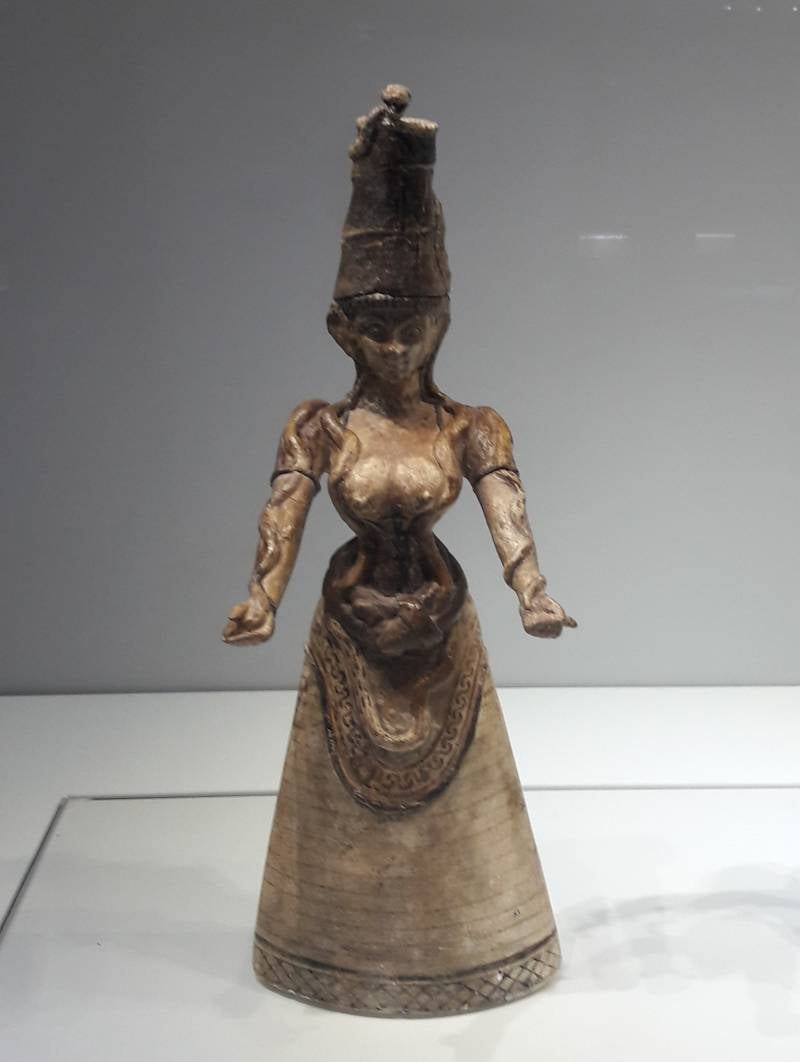 Another figure "snake goddess." Both figurines were found by Sir Arthur Evans during his excavations on Crete in 1903. They are made of earthenware and covered with glass glaze, painted with bright pigments in reddish-brown and yellowish-green colors and later baked, acquiring glassy shine. Today they are in the Heraklion Archaeological Museum. 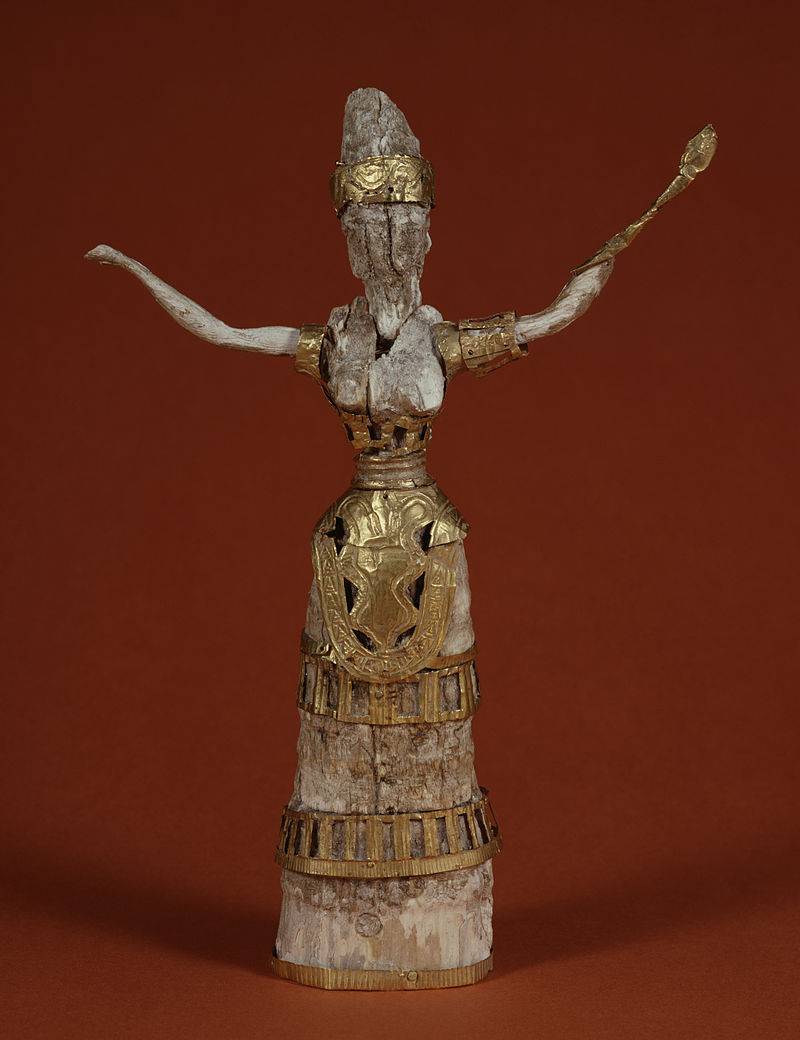 Snake Goddess from the Walters Art Museum. Another masterpiece of Cretan small plastic, made of ivory and gold (17 cm height). Her slim figure is dressed in a traditional Cretan dress with ruffles, but her arms are raised upwards. A number of items of clothing made of sheet gold, that is, this figure was most likely more valuable than the previous two, ceramic.

Interestingly, figurines of goddesses with snakes were found in a room next to the palace sanctuary, in special hiding places (stone boxes), along with a variety of objects of a clearly cult nature: votive images of women's clothing, painted shells, figurines of flying fish and a marble cross.

An important discovery is the clarification of the date of the disaster on the island of Santorini, which was conducted by Danish scientists from the University of Aarhus. Thanks to their work, the time of this event today is known up to a quarter of a century - between 1627 and 1600 years BC. er (or 100-150 years older than previously thought). 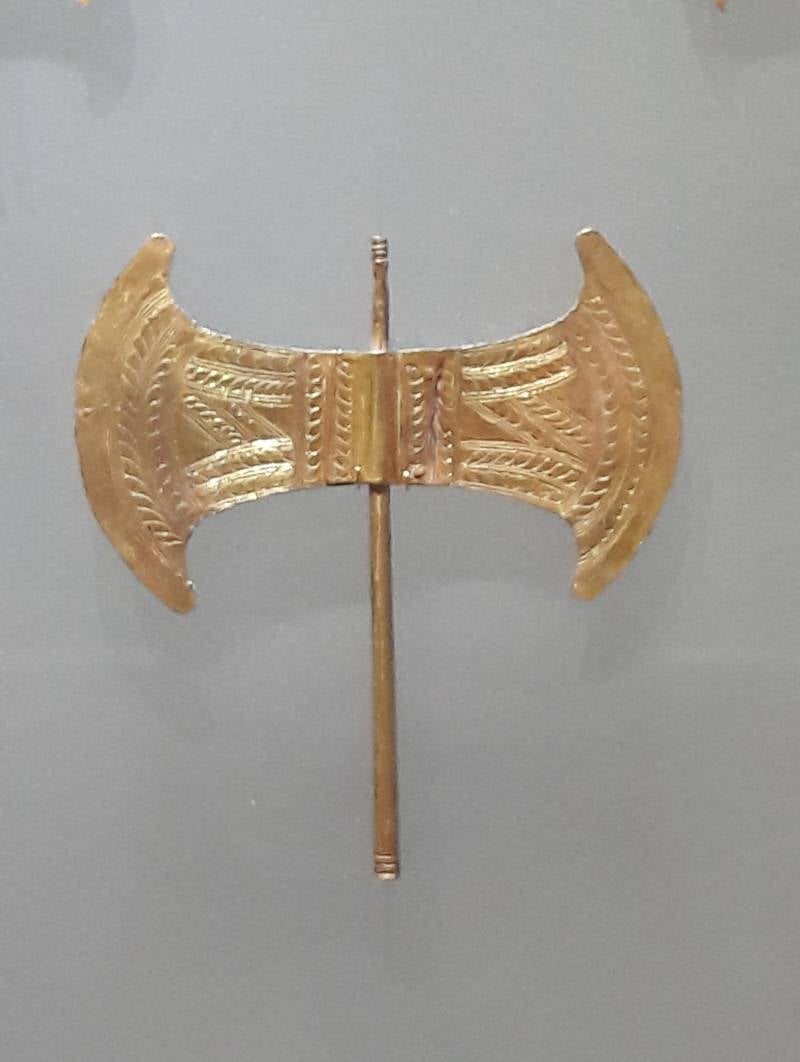 To clarify the date, a petrified olive branch found by archaeologists was used. First of all, it was precisely possible to establish that the tree died during this fatal eruption of the volcano. Well, the dating itself was conducted at once by two methods: dendrochronological and radiocarbon, and they both gave similar results.