Latvia has found a "Russian threat" even in schools

October 19 2017
2
The Latvian Minister of Education and Science Karlis Shadurskis said that in Latvia from the 2020-2021 school year, all general education subjects in secondary schools will be taught only in Latvian. 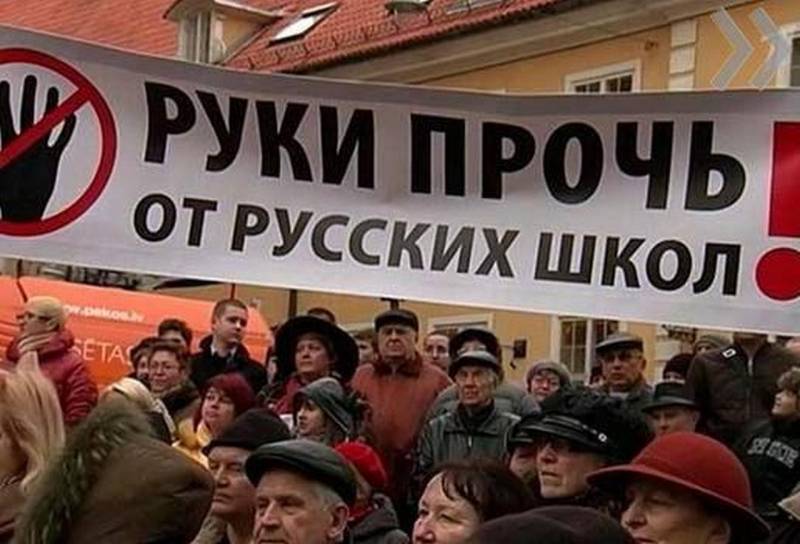 As they say, a bad example is contagious. In Ukraine, October 5 introduced a law on education, which robs students of the right to study in their native language. Now Latvia is there too. The idea of ​​translating Russian schools into the Latvian language of instruction has long been discussed in the government. The national bloc of Latvia has raised this issue since Latvian independence, but so far all aspirations to eliminate teaching in Russian in Latvian schools have been stopped by protests of Russian activists.

And now October 6 Karlis Šadurskis announced that in three years all subjects in secondary schools will be taught only in the state language. He substantiates this by saying that 22% of the minority youth do not know Latvian very well or do not speak it at all.

According to statistics in the middle of 2015, 25,8% of the population of Latvia, which is 512 thousand people, are Russians. If you exclude Russian education in the republic, the same will happen история, as in foreign countries with the nineteenth-century Russian emigration, in which the Russian language and identity were almost completely lost in a generation in their midst.

Russian schools in Latvia have long been part of the "national threat". Over the 27 years of active anti-Russian propaganda, the Russian-speaking generation of Latvians grew up, who since childhood had been inculcated in guilt for their parents, the "occupiers." A generation that is ashamed of its origin and defiantly speaks Latvian, even with Russians. And this happened partly because, because of the closure of Russian schools, parents had to give their children to completely Latvian schools, where they would not learn to become outcasts, they told the lessons of history at the blackboard how the Russians had “occupied” poor Latvia for centuries.

Jacob Pliner, a member of the board of the Russian Union of Latvia, accuses the authorities of its inability to resolve important issues - the development of the economy, medicine, and the desire to divert attention from the really important issues of the state. “Of course, the Latvian language needs to be known and studied, but the right to receive national minority education in their own language is considered a democratic principle all over the world,” said Pliner.

The mayor of Riga, Nil Ushakov, is fighting for this democratic principle. He wrote on his Facebook page that he would not allow the elimination of school education in Russian. Nil Ushakov also said that this step is only a cover for the mass closure of schools in the province. “After all, everything is clear to everyone - closing the school is the very last step. And in order to divert attention from these plans, we are all once again trying to play off on a national basis, ”the mayor of the capital emphasized.

The co-chairman of the Russian Union of Latvia, Miroslav Mitrofanov, said that the Russian community will be forced to hold protests against the ban on teaching in Russian in Russian schools. We hope that national-mono-ethnic Latvia can still not violate the provisions of the Framework Convention for the Protection of National Minorities.

Ctrl Enter
Noticed oshЫbku Highlight text and press. Ctrl + Enter
We are
About Stalin and KhrushchevWhat you didn't want to know about England
2 comments
Information
Dear reader, to leave comments on the publication, you must to register.