October 21 2017
54
Poland was one of the western countries, with the direct support of which, as a result of the 22.02.2014 coup in Kiev, the Bandera Ukraine was born. Then Poland became a lawyer for her crimes in Europe. However, the policy of Warsaw in relation to the new Kiev government was ambivalent: it supported the “revolution of hydration”, but at the same time, as it were, it did not notice its Bandera vanguard in the face of the “Right Sector”. 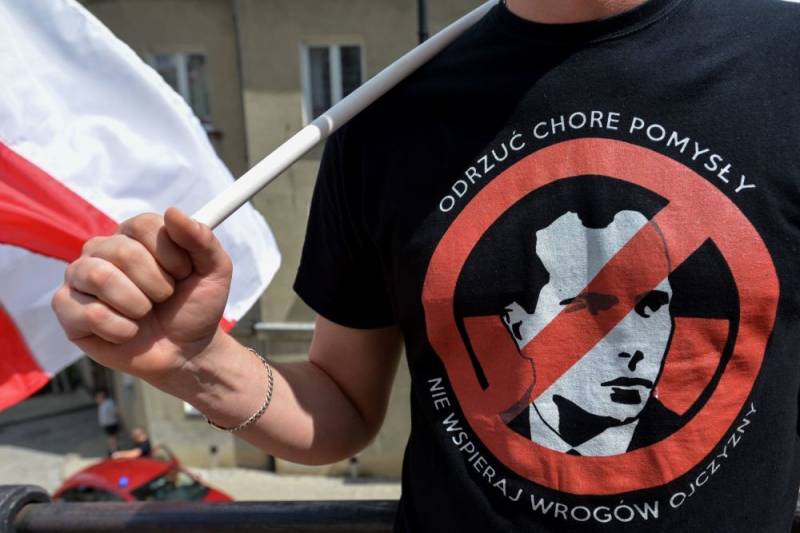 Warsaw's insight, although rather hypocritical, occurred relatively recently: from the lips of the highest Polish officials sounded historical claims to Bandera, they remembered the “Volyn massacre”, the political thesis: “Ukraine will not enter Europe with Bandera” became a refrain in their speeches. Perhaps this is due to the “offensive historical policy” of President Andrzej Duda, within the framework of the officially declared “Polish interpretation of history”.

Nevertheless, Bandera’s Ukraine and nationalist Poland still find a common language, ostensibly on the basis of European values, although more than these “values” the ambiguity of their relations is removed by a common anti-Russian policy, de-Sovietization of their past, the struggle with historical monuments of the Soviet era. The common enemy and hatred are known to unite.

However, if you look more closely at the Polish policy towards Russia, you will notice interesting nuances: Warsaw exhibits its anti-Russianness in order to make money on it. Europe is not interested in lately, but America continues to pay for Russophobia, gives preferences and political patronage over old Europe. Then, if the anti-Russian policy becomes unprofitable for Poland, it can change significantly. Poland, after all, is not the enemy of Russia: there are countries on the world stage in too different weight categories.

Today, Polish propagandists are practicing anti-Russian rhetoric, pictorially offended Russia for Ukraine, for the “annexation of the Crimea” and intervention in the Donbas. And the Polish Foreign Ministry is offended that Moscow has been denying high-level meetings for two years in a row, and is looking at Galicia and Lviv, and even wanted a passport to place it.

The present attitude of Poland towards Ukraine is being issued by the so-called “Saakashvili’s invasion” across the Polish border into Lviv, which was simply impossible without the political support and assistance of the Polish special services. Saakashvili invaded Ukraine from Poland and solemnly declared that he would take power from the Kiev "baryg" headed by President Poroshenko, just like Polish Impostors in ancient times. And, having overcome all the obstacles Poroshenko, fell into the arms of the mayor of Lviv, Andriy Sadovy.

Thus, Warsaw radically changes its policy in Ukraine. After the coup in Kiev under the American leadership, the Polish elite relied on American missiles and Ukrainian / Bandera bayonets against Russia, and wanted to become their second echelon. However, 2017 is already a year in the yard, the American campaign against Moscow with the Ukrainian landsknechts did not take place, crashing against the Crimea, the Donbass and the successful counter-attack of the Russian Aerospace Forces in Syria.

Washington could not push Moscow, change its policy in Ukraine with sanctions, but he fell under the heel of Donald Trump, and became confused. Trumpovsky Washington continues to support Ukraine against Russia, but in a different way, it’s not at all as ardent as Obama and Biden, and it’s not clear what he had in mind.

After the tragic Trampian events in America, in Warsaw, Bandera suddenly rebelled on the banner of the “revolution of hydration”. When the all-American campaign against Moscow lost relevance, when it became clear that it would not be possible to burn Bandera in the flames of war with Russia, Poland changed the rate to destabilize Bandera’s Ukraine. Hence, Warsaw’s full support for the “invasion of Saakashvili” into Ukraine and its imposture. Moreover, Saakashvili acts, most likely, with the sanction of Washington.

At the same time, Warsaw, as it were, continues to support Galician nationalism, the mayor of Lviv Sadovy with a monument to Bandera. This support is also ambiguous. Poland supports Galician nationalism while it is destroying a large Ukraine, thereby preparing Poland’s expansion into Galicia and beyond.

Polish journalists have recently discovered that Ukraine is a sick country, degrading and turning into a desert. It turns out that Poland is now in an ambush, waiting, and is going to send doctors, and not only in Galicia, but up to Kiev and Odessa, within the framework of the Polish concept of the Intermature.

At the same time, the strategic anti-Russian vector of Polish policy is preserved, but now Russia is perceived as a participant in the future revival of the “Ukrainian desert”, so it will be necessary to somehow negotiate with Russia and its doctors, and the Polish Foreign Ministry worried that for two years now there have been no relationship.

It is significant that one of the leaders of Polish nationalists, Konrad Renkas, says today: “Ukrainian politicians and diplomats publicly demonstrate the maps of“ Great Ukraine ”with Chelm and Przemysl, which have never been Ukrainian or Russian. Meanwhile, Lviv was part of Polish culture for seven centuries. Every stone in Lviv shouts in Polish! They wanted a "Great Ukraine" and, finally, will give Poland Galicia. "

Meanwhile, the American-Polish impostor, the ex-president of Georgia and the ex-mayor of Odessa, Miho Saakashvili, threatens to demolish the “power of baryg” in Kiev, led by the corrupt official Poroshenko. The beginning of the new revolutionary events can be put on an opposition rally in Kiev on October 17 with the participation of Saakashvili, it is intended as the beginning of the end of the “corrupt government”. Hardly Poroshenko will be able to stop this puppet of the United States: Yanukovych in a similar situation could not resist Euromaidan, organized by the United States.

Ctrl Enter
Noticed oshЫbku Highlight text and press. Ctrl + Enter
We are
Poland challenged UkraineResults of the week. “Look, the whole face is black! Have you ever read Moidodyr? ”
Military Reviewin Yandex News
Military Reviewin Google News
54 comments
Information
Dear reader, to leave comments on the publication, you must to register.