October 19 2017
91
Apparently, Mr. Trump is the last president of the United States. The American "empire" under him will destroy the war. The disaster will take place over the next 10 years. The United States will not come to any reforms, because the oligarchy in the state is "above the law." Trump was dictating Wall Street - just like she had dictated to Obama before. 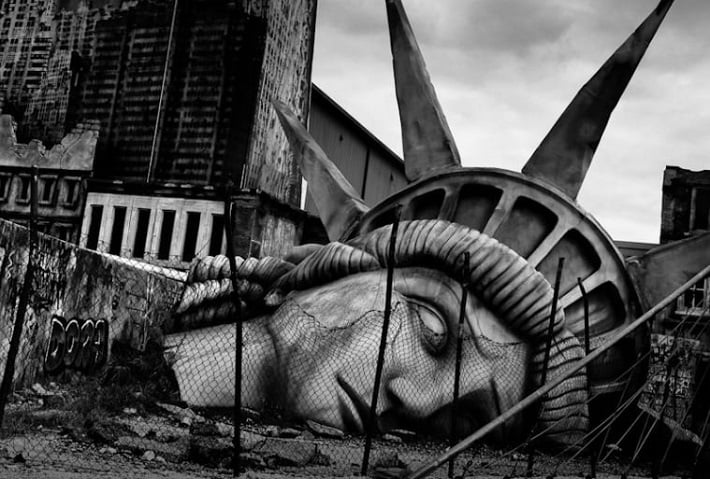 Under Trump, the Americans are in for a catastrophe, believes Michael Krieger, author of the portal of alternative analytics. "Lieberty Blitzkrieg".

The board of Mr. Trump already creates "unique risks", the author believes. However, when it comes to manifestations of militarism abroad, it becomes much worse. There are figures behind Trump. This means that the US military campaigns are "much more" than Trump itself.

After the financial crisis, "the US empire will never be reformed by itself." “Too much money and power” is at stake. The author is sure: the oligarchs in the United States are "above the law." “The largest financial criminals of a whole generation were not only freed from prison for their actions, but also received a reward,” he writes. “If Wall Street used to run the Obama administration, now it controls the Trump administration.”

"Elite scammers and their supporters," according to the analyst, will continue their insane policy until "all this collapses." Regardless of who ruled the country - Trump, Pence or Hillary Clinton, the situation does not change. The train is moving in the same direction.

American society is "incredibly corrupt," Michael Krieger is confident. People behave "abnormally and offensively." The public "no longer trusts any of the institutions," and there are "very good reasons". American public institutions exist only to serve as "gatekeepers for predator-swindlers."

In this dangerous phase of the “imperial collapse” war is the most likely way for the subsequent collapse of the empire. The author does not see people in power who would learn from Iraq, Libya and now Yemen. On the contrary, it is obvious to him that the “permanent consensus of the interventionists”, who will never cease to look for “the next country for the bombing.” It is likely that these leaders "will eventually choose the wrong war," and after that everything will "quickly collapse."

According to Krieger, Iran is becoming the “most likely target” of aggression under Trump. However, such a move will not lead to a scenario like the war in Iraq. In 2003, the US government still had some influence in the world. Only two years after 11 September 2001, and the US government was still considered a positive force. George W. Bush and his team used this good attitude to destroy a country that never attacked the United States. Hundreds of thousands of Iraqis were killed. Worse, the author recalls, all this "was based on lies and propaganda in the media."

After a decade and a half, the US got involved in a host of other overseas adventures, but none of them were as big as the Iraq war.

And today, a new serious conflict can occur in a world where the United States "despises much more" than in the 2003 year.

In the 21st century, the US government self-extinguished itself: it showed itself to be a “corrupt hooligan.” This role was demonstrated both outside and inside: the “bully” found himself not only in front of the outside world, but also in front of his own people. And those who are in power, who have influence in the USA, either do not recognize this reality, or are not at all agitated by it.

Such “arrogance” in combination with “internal corruption” will historically lead the empire “to the cemetery”. “I think,” the author writes, “that both the allies and the enemies abroad have lost patience. Given the opportunity, they will allow the US to disappear. "

Here it is, the beginning of the end of the "American Empire"! The US has already entered a new period of its stories, says Krieger. Before the country - crossing the Rubicon.

Watching the decline of the “American Empire,” Krieger does not think that “a strong and obvious military response from Russia will happen in the near future.” The analyst does not think that “Putin wants to give the American media and the newly-made neo-conservative Donald Trump the reason to do everything insane for real, so that he can accuse Russia before a court of public opinion.” According to Krieger, Putin is "too smart for this." Rather, Putin will take "backstage steps" to "weaken America’s economic power." At the same time, Moscow will take part, “in minor provocations,” in order “to seduce the idiots responsible for US foreign policy” to make more mistakes abroad.

In other words, Russia will try to force the United States to continue its advancement in the region where real success "cannot be achieved." At the same time, the author is convinced, "the American economy will deteriorate further." After all, the current very weak economic “recovery” has been going on for almost ten years, and such a cycle is too long. Therefore, all that Russia really needs is “to take a few steps backstage and allow the United States to collapse in their pride and stupidity”. This is exactly what the analyst believes will happen.

The current US government, in his opinion, is so “abnormal and frankly stupid” that it believes that a major aggression is the answer to serious international threats. In actual fact, the opposite is true: China and Russia are simply waiting for the United States to do something “historically idiotic” abroad.

Many Americans, reminds Krieger, once voted for Trump - in the hope that he will avoid such a scenario. This optimism looks today "all the more inappropriate."

Krieger expects a serious military error in the coming years. This mistake "will cause a chain reaction," which will ultimately deal a huge blow to the American empire. Those who will live for another ten years will see the “period of the rapid disintegration of the country” - the one that its citizens still knew.

The task of the Americans is to realize the risks of this threat as soon as possible and to prepare for it. If we succeed in preparing ourselves, a basis will be created for changing the situation “into something positive”. Krieger encourages everyone to start with themselves. People who need it should be helped to disseminate “ideas of decentralization” and adhere to the idea of ​​abandoning centralized authoritarian structures. To "create a better world," the US will need a much more conscious population, able to "behave with dignity."

Curious feedback from readers who shared their opinions on the article Krieger.

Chris Edwards notes that he “likes an astute analysis” of Krieger. The danger of a hot war in Iran or North Korea for "ordinary people" in the United States is that Trump and his gang-fraternity will force the American people to pay for a military mistake. The people will see "rationing and gas, and rubber, and even food." And, of course, money: Trump and his team want the people to pay for the “war effort” that they supposedly need “for our nation and for all of us.”

Rocketman writes that if he won the election in 2016, Hillary Clinton, the United States would "have already fought with Russia and, possibly, with China and with Korea." Trump's election for some time delayed the collapse of the "American Empire", that's all. It's too late to save her!

Terry DeGraff believes that Russia supports Iran. And with Hillary, with Donald, the United States would be in the same place.

Temmie recalls that the United States and before Trump were engaged in "useless wars."

Maria Rigel is pessimistic and confident that the whole world is moving towards WWIII (Third World War). She cannot say where the war will start, there are several “candidates”: North Korea, Iran, a new focus of instability in the Middle East (Turkey?). Even Ukraine and / or the Baltic republics cannot be written off. Mary admits that, having broken out in one region, the new war will not remain within local borders. The regional conflict, in her opinion, will turn into an all-out war that the United States and partly the NATO states will unleash against China, Russia and their allies.

So, the commentators almost heard the call of Krieger and are preparing to die in a third world war. Few doubt that it is about to begin. And few people believe that the other president on the site of Trump would have behaved differently. We also recommend that Kriger himself be armed with this opinion: after all, he himself writes that it is not the United States that rules trump or Obama, the rules are dictated by people from Wall Street.