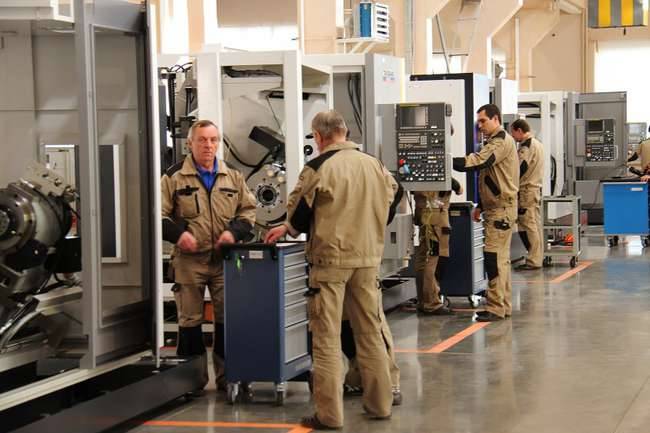 At present, there are about 100 enterprises in the machine tool industry of Russia. In 2011, it was noted that according to official data of relevant ministries, as part of the machine-tool industry of Russia 46 enterprises producing machine tools, 25 plants specializing in the manufacture of forging equipment, 29 manufacturers of cutting, measuring, fitting and assembly tools, as well as seven scientific research institutes and 45 design offices.


It is planned that regional machine tool building clusters will be created in St. Petersburg, Tatarstan, Rostov, Ulyanovsk and Sverdlovsk regions. The main areas of their activities will be engineering and system integration in the field of engineering technologies, the production of original Russian equipment, the design of modern production facilities, and the training of qualified personnel for the industry.

Holding "Stankoprom" was created in 2013 year under the auspices of the state corporation "Rostec" as a system integrator of the Russian machine-tool enterprises. It controls the import of equipment, combines foreign developments with the Russian assembly, develops Russian R & D and introduces them.

The holding was established on the basis of OJSC RT-Stankoinstrument and OJSC RT-Mashinostroenie, and is their successor. “Stankoprom” has the status of the head organization of Rostec State Corporation in the field of machine-tool construction and tool production. At 2014, the holding's consolidated assets were valued at 15 billion rubles. Planned investments are about 30 billion rubles, of which own financial resources are 5,5 billion rubles, and 11 billion rubles are private investments and bank loans in the ratio 50 to 50. The strategic task of the Stankoprom holding is the long-term provision of technological independence and competitiveness of the Russian engineering industry through the creation of competitive domestic engineering products. The holding aims to achieve, by 2020, the share of domestic machine tools in 70%, while the holding may become the only supplier of machines for defense enterprises.

By 2011, Russia was ranked 21 among the countries of the world in terms of machine tool production.

In January, 2012, one of the world leaders in the machine tool industry, the German company Gildemeister acquired a land plot in Ulyanovsk for the construction of a plant for the production of high-precision metalworking machines. October 23 the same year, construction of the plant began. It is planned that the plant will produce up to 1000 machines per year.

In the 2013 year, 180 enterprises belonging to the Stankoinstrument association released products for 26,6 billion rubles.

In October, the government of the Rostov region signed a cooperation agreement with Vnesheconombank’s leadership, according to which this development institution becomes the main creditor of a project to create a machine-tool cluster in the region based on the Azov forge-pressing equipment factory DonPressMash. According to the Minister of Industry and Energy of the Rostov Region, Alexander Grebenshchikov, the total cost of the project is 2013 billion rubles. The anchor investor of the cluster is MTE Kovosvit MAS, a joint machine-tool enterprise established on a parity basis in July 2,3 by the Russian MTE group and the Czech Kovosvit MAS as, one of the leading European manufacturers of turning and milling machines, machining centers and technical solutions.

In 2014, structural changes began in the range of products manufactured by Russian machine tool enterprises, which are characterized by an increase in the production of numerical control equipment (CNC) and machining centers, which increases the share of high technology products and positively affects the added value of the products.

In 2015, according to the enterprises of the Stankoinstrument Association, the production of machine tools amounted to 1873 pcs. or 172,8% to the level of 2014 of the year. Separate enterprises of the Association showed more than 2's multiple growth compared with 2014 year (JSC Stankotekh, Kolomna - 273%, Research and Production Association “Machine-Tool Building, Sterlitamak - 243%).

In 2015, one of the significant events for the industry was the formation of a large private player in the machine tool industry - the company STAN, which mainly included the assets of the largest Russian enterprises, including the heavy machine tool industry: Ivanovo Heavy Machine Tool Plant LLC (Ivanovo) , Stankotech JSC / KZTS CJSC (Kolomna), Ryazan Stankozavod LLC (Ryazan), NPO “Stankostroenie” LLC (Sterlitamak), as well as Grinding Machines LLC ( Moscow).

11 November 2015, the vice-premier of Russia Arkady Dvorkovich, said: “Only yesterday we discussed in the government issues of machine-tool construction - an industry that for a long time remained outside the framework of an active industrial policy. In the last year, the policy has become focused, machine tool industry comes to the fore. Of course, the driver of demand for machine tool products today is the military-industrial complex, and a significant amount of resources that are spent on the implementation of the DIC program is being formed simply for our machine-tool factories, they have begun to use it: holding companies are already being created that unite our leading machine-tool enterprises. One example is the holding company STAN, which already unites four large enterprises. It produces high-quality products that are absolutely comparable with foreign counterparts, and it does it faster, and, moreover, is competitive in price. ”[66]

In March, the 2016 of the year in Yekaterinburg opened a Russian-Japanese serial production of 120 CNC machines per year.

In the Moscow region will create a Russian-Chinese enterprise for the production of high-precision metalworking machines. The total investment in 2016 — 2017 in the project for the production of high-precision machine tools and CNC machining centers exceeds 110 million euros. The company will start working in the Leninsky district of the Moscow region in 2017.

One of the projects planned for implementation under the special investment contract is the joint venture of the Ulyanovsk Machine-Tool Plant and the German-Japanese concern DMG MORI SEIKI; The project provides for the launch of a wide range of turning and milling machining centers with access to 2017 year at a design capacity of over 1000 machines per year. The project envisages the creation of an engineering center for training personnel, as well as the development of new models of metal-cutting equipment in Russia.

The project of MTE Kovosvit Mas LLC envisages the creation by 2018 of a modern high-tech production of metalworking machines of the turning and milling groups, as well as multifunctional metalworking centers of the company Kovosvit (Czech Republic). The area of ​​the plant will be 33 thousand m2.

The Kovrov Electromechanical Plant, together with the Japanese manufacturer TAKISAWA, is localizing the production of a new generation of turning and milling machining centers.

The volume of production of machines in Russia:

1. A new workshop of the FSUE “Instrument-making Plant” for the production of machine tools has opened in Trihgorny
At the site of the new plant in Trihgorny, several types of the most demanded milling, turning and other types of machine tools for mechanical engineering will be produced, which in their technological characteristics are not inferior to foreign analogues at a significantly lower price. The volume of investments: more than 1 billion rubles.

In total, over 446 million rubles were invested in production. More than 60 jobs will be created in the enterprise.

4. A new workshop for the production of progressive cutting tools has been opened at Votkinsky Plant OJSC (Udmurtia). Production is import-substituting.

According to the head of the company, this shop is the first and so far the only one in Russia. The plant employs 525 CNC machines, of which more than 100 machining centers, including high-speed 52.
The new workshop will fully meet the needs of this equipment, significantly increase the cutting speed and increase productivity. The estimated output of the tool is 50 000 pieces per year.

5. In the Vladimir region, at the Kovrov Electromechanical Plant OJSC, an assembly production of machines of the Japanese company TAKISAWA was opened.
Takisawa gives Kovrov Electromechanical Plant the right to use technical information for assembling, selling, commissioning and servicing CNC lathes of the TS-4000 model in Russia and the CIS countries.
At the first stage, the volume of production can be up to 600 units per year, later - in cooperation with machine tool enterprises of the region - up to 1700 units.

6. A ceremony dedicated to the release of the first Russian machine tools of the German-Japanese concern DMG Mori Seiki took place in Ulyanovsk.
LLC “Ulyanovsk Machine-Tool Plant” launched the assembly of the first machine tools with numerical programmed control SIEMENS of the latest design series ECOLINE. While the assembly is carried out on leased premises. Until the end of 2014, the order of 100 machines will be assembled here.
There is a construction of a plant worth 3,2 billion rubles. When the enterprise reaches its full capacity, the number of manufactured machines will be 1000 pcs. in year. Creation of 200 jobs is planned.

7. In Tatarstan, on the territory of the SEZ "Alabuga" the opening of a new plant of the Russian company "Interskol" took place
The Interskol-Alabuga plant will provide up to 40% of import substitution in the power tool industry. The volume of investments in the first place of the plant amounted to 1,5 billion rubles. At the moment, the plant employs 200 people.
In 2015, it is planned to complete the construction of the second line of the plant, and by the end of 2017, the third line will be commissioned. In addition to electric tools, there will be produced tools for small-scale mechanization of production, welding machines, compressors, and much more. Total planned creation of 2000 jobs.

8.In Ulyanovsk, a new plant for the production of machine tools was opened in the Zavolzhye industrial park.
Investments of the German-Japanese concern DMG MORI amounted to 3 billion rubles. By 2018, 250 jobs will be created in the enterprise. It is planned that the localization of production will be 50%.
The plant will produce three types of machines of the ecoline series: machines for turning, milling and milling vertical machining centers. production capacity of the plant -1 200 machines with the possibility of increasing production to 1500 - 2000 machines per year.

10. Assembly production of lathes Genos L of the Ural machine-building corporation "Pumori" (Ekaterinburg)
The Ural machine-building corporation Pumori solemnly opened serial production of metal-cutting machining centers Okuma-Pumori (Russia-Japan) in Yekaterinburg on the basis of Pumori-Engineering Invest.
The plan for 2016 is 40 machines, followed by an annual increase to 120 by 2020. Now localization is more than 30%, with 2018 it should exceed 70%. Full cooperation is hampered by economic sanctions.

Ctrl Enter
Noticed oshЫbku Highlight text and press. Ctrl + Enter
We are
List of destroyed the largest and most high-tech enterprisesMilitary reform as an integral part of the security concept of the Russian Federation: Systematic dynamic assessment
Military Reviewin Yandex News
Military Reviewin Google News
101 comment
Information
Dear reader, to leave comments on the publication, you must to register.