Maidan 3.0: who will be brought forward from Kiev with their feet 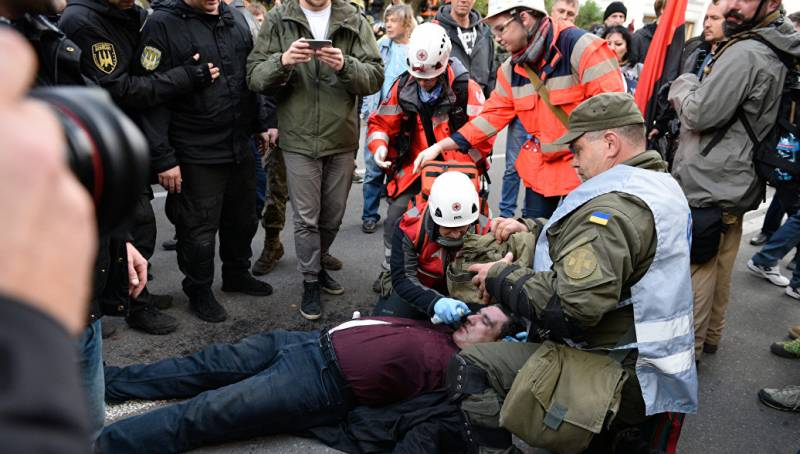 Independence Squares in Ukraine always begin in the fall, after digging potatoes and ending the season of harvesting gardens in Poland. This is not just a tradition, it is a very sensible decision, which greatly reduces the price of the whole event. Ukrainians are very difficult to tear from their gardens or Polish apples. At this time they are politically inactive. And when the crop in the country and its neighbors removed, that's when you can make it. Did not begin to recede from this tradition and this time.

Before disembarking operations in Normandy in 1944, the Allies calculated everything, the phase of the moon, the height of the tides, the wind rose and the statistics of fogs. Not less calculations are required today and preparation in Ukraine Maidan. There are no trifles here either. For example, an important factor is the weather. When planning the start of the operation, it is necessary to take into account the late frosts in May and the record cold June 2017 of the year, which shifted the deadlines for mobilizing “activists” in the current year by at least two or three weeks. And it seems that the ex-president of Georgia and the American forecasters miscalculated a little here.

When Mikheil Saakashvili invaded Ukraine via Poland through Poland, the capture of Kiev on September 19th was scheduled by blitzkrieg. But, as in 1941, when Tanks Kleist was stuck in the fortifications of the Kiev UR, the Georgian revolutionary now, soberly assessing his strength and having carried out a reconnaissance attack on the Bessarabian market, prudently chose to postpone the assault on the main citadel of Poroshenko in the second half of autumn, when his emissaries in the field could collect his shock detachments from private plots and parents vegetable gardens.

Sticks in the wheels of the president

President Petro Poroshenko, well aware of the problems of the enemy and appreciating Mother Nature’s mercy to him, decided not to waste time, but to act. Well studied history the campaign of the Persian king Darius to Scythia and Napoleon to Russia, he decided to use the scorched earth tactics against his opponent.

During all the voyages of Saakashvili to the regions, he was accompanied by failures. That microphone will move away from the plug, then a local deputy, who promised him support, will rid of the Kalashnikov machine gun.

All this was done by Petro Poroshenko for the sole purpose: to minimize the extras of the October 17 rally and thereby show the people of Ukraine and the sponsors of the former Georgian president who is the owner in Ukraine today.

The hetman’s last argument was the threat to bus drivers, who in the evening 16 flatly refused to carry the “disinterested” soul of the rally to Kiev. And those who dared to leave, waited problems on the outskirts of the capital:

The first day. How it was

As if not noticing these formidable preparations, the “sun of Austerlitz” rose quietly and somehow in everyday life over Kiev. Saakashvili’s fairly thinner units from 10 in the morning began to stray into thin columns. People who are from “Khreshchatyk” (“Self-help”), who are from “Arsenalnaya” (BYuT), began to pull up to the government quarter.

On the side of the “knight of light” Mikhail Saakashvili, 17 of October were the “legions” of VO Svoboda, Azov, which is now called the National Corps, and Andrei Sadovy’s self-help and Yulia Tymoshenko Bloc, mentioned above.

By noon, the organizers of the event, it became clear that the reserves would not work and it would not be possible to throw the Verkhovna Rada with hats. The deputies from the authorities, for their part, appreciated the weakness of the protesters, ignored the ultimatum offered by the protesters and offered to consider their conditions for a couple of days after considering medical reform. Realizing the weakness of their positions, the "revolutionaries" were forced to agree.

Probably, this day everything would have ended in Poroshenko’s complete victory if the guys in the balaclava (Biletsky’s “Octobrist”) had not appeared with an obvious desire to start a provocation, which they succeeded in brilliantly. Bottles and stones flew to the police ... 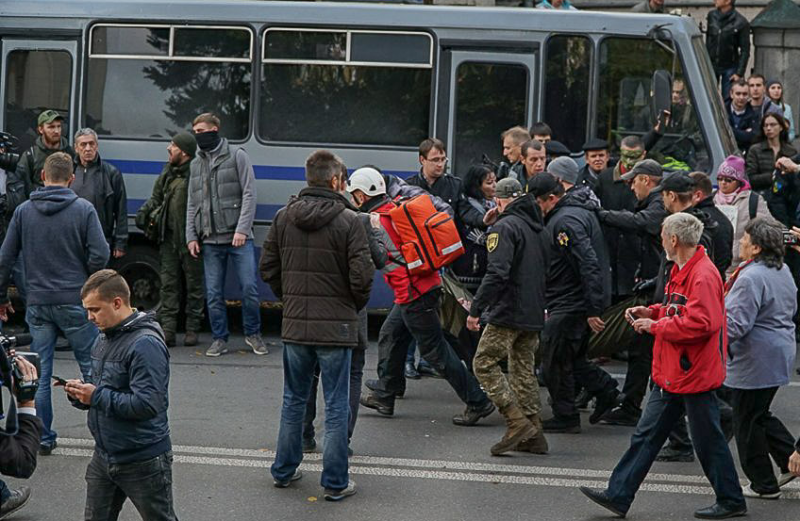 As a result, one policeman and several demonstrators were hospitalized with the police, and a tent camp appeared in Mariinsky Park from about 60 houses for the “Octobrists”, as the authorities had already nicknamed them.

The protesters have not yet brought field kitchens and orchards, but that will come with time, it can be postponed until tomorrow, especially since no activity has been planned for October 18.

The leaders of the protests, appreciating the strength of the enemy and his determination to hold out to the end, decided to take a time out and regroup their forces in order to try to swing the throne of the President of Ukraine on October 19.

So, let's try to sum up the first results. October 17, using football terminology, ended in an inconclusive draw. Petro Poroshenko was able to disorganize the game of the enemy at the start, and the first half of the day brought him success. But he could not hold the victory until the evening. His opponents, very sluggishly and faintly starting the game in the morning, were able to seize the initiative in the second half and otkvit missed a goal in the morning.

Nevertheless, it is already obvious that without a serious restructuring of the entire game, Saakashvili and his allies will be difficult to achieve. All revolutions develop or die out on the same principle. They must constantly go from victory to victory, while increasing their ranks. Stopping on the spot, and especially retreat, is unacceptable and lead to defeat. And if there are no victories, then it is necessary to present the matter as if they were.

All these rules are known to Saakashvili and his closest aides, for whom the current Maidan in Kiev is not the first. That is why, by evening, they decided in a joint statement to list all the “peremogues” achieved by them: a draft law submitted by the president to lift parliamentary immunity, which still does not satisfy them, putting the issue of changing the electoral system in the country’s agenda on October 9 , recall of the presidential draft law on the Anti-Corruption Court.

For two days for “activists” this will be enough, and then new victories or sacred sacrifices will be needed, which, as practice shows, are best for galvanizing dying Maidan. And one of the deputies of the organizers or even Saakashvili himself can become the most convenient victim for the Ukrainian “opposition”. If this happens, on the same day, Yulia Tymoshenko will put on her fighting scythe and lead the march on Poroshenko, and she will have one hundred percent chance of crumbling the guarantor of the constitution into a minor vinaigrette. In a political sense, of course.

And if the “opposition” over the next few days fails to come up with anything original, it will be defeated.

Ctrl Enter
Noticed oshЫbku Highlight text and press. Ctrl + Enter
We are
Since the launch of the first artificial satellite of the moon, 50 years have passedThe tragedy of the American army ("The Atlantic", USA)
Military Reviewin Yandex News
Military Reviewin Google News
55 comments
Information
Dear reader, to leave comments on the publication, you must to register.