"The jealous rival" and traces of the Kiev residency of the CIA. How Voronenkov included the countdown

October 18 2017
13
A real wave of discussion in the media of Russia and Ukraine was raised by the statement of the Prosecutor General of Ukraine Yuriy Lutsenko on the establishment of the customer for the murder of the fugitive Russian deputy Denis Voronenkov. As is known, the deputy of the State Duma of Russia, together with his wife Maria Maksakova, fled to Ukraine about a year ago, where he was killed by a radical killer. The murder of 23 took place in March in the center of Kiev, and it was executed (and many experts noticed) somehow frankly unprofessional - firstly, in front of dozens of witnesses and under several surveillance cameras, and secondly, to put it mildly the killer.


According to Yury Lutsenko, Ukrainian investigators “have no doubt” that the murder of Denis Voronenkov was commissioned by the ex-husband (“civil”) Maria Maksakova Vladimir Tyurin, a man, at least earlier, connected with the criminal environment. In this case, the Prosecutor General of Ukraine, it was stated that the motive for the murder of Voronenkov on the part of Tyurin was the alleged outbreak of jealousy towards the former wife. And so all those years while Maksakova lived with Voronenkov, Tyurin was offended, you know, saving up, saving up, saving up, saving up, and as soon as the married-deputy couple ended up in Ukraine, he began to prepare for the physical elimination of the separation worker. The loving heart, in the version of the Ukrainian prosecutor's office, could not stand it, and the criminal mind began to prepare evil ...

Immediately after the speech, Lutsenko’s widow Voronenkova (Ms. Maksakova) radically changed her testimony, so to speak in this situation. If earlier, Maria Maksakova literally in every interview (be it the media of Ukraine or Russia) on the question of whether her husband Vladimir Tyurin could “order” her, answered firmly “No!”, Now she suddenly declares that it is Tyurin, and even 100 % Tyurin, became the customer of the shooting of Denis Voronenkov - “remotely from Russia”.

Even people who are far from the investigative nuances in criminal cases, there was a persistent feeling that the Ukrainian prosecutor's office in a situation with the murder of a fugitive deputy of the State Duma of the Russian Federation is guided by the only principle: the main thing here is not to go to yourself ... Yury Lutsenko and appointed the culprit for the murder of Tyurin located in Russia. Who is behind the liquidation of the runaway Russian parliamentarian in reality?

Approaching the answer to this question may allow the information at the disposal of the security organs of the Donetsk People's Republic. As you know, lately, several representatives of Ukrainian special structures, and not ordinary employees, have taken the side of the republics of Donbass at once. Thanks to the desire of these people to shed light on what is happening in today's Ukraine, very interesting details of Voronenkov’s life in Kiev from the moment of arrival to the moment of death are known.
The main problem of the deputies who had fled was certainly not the problem of hiding from her ex-husband’s ex-husband, allegedly a “jealous man.” By the way, Tyurin himself, when journalists ask him a question about whether he ordered the murder of Voronenkov, listens to reporters with outright bewilderment and replies that he is well aware of the desire of certain Ukrainian structures to hang this crime on him ... At the same time, Tyurin makes it clear that he is from that world from which he would be instantly “asked” if he would decide on a criminal offense (slightly paraphrasing) “because of the lady’s heart”.

Returning to the data that were at the disposal of the competent authorities of the DPR ...

The main task of Voronenkov after the flight was associated with the preservation of the lion's share of their capital (and the general condition of the fugitive is estimated at about 100 million US dollars) and obtaining security. Realizing that the capital that was acquired by not honest and overwork, will attract the attention of many forces in the same Ukraine, Voronenkov decided to cooperate with the Ukrainian special services. At the same time, the Ukrainian special services themselves, by definition, could not leave the ex-deputy of the lower chamber of the Russian parliament without attention.

Considering the fact that the independence of the Ukrainian special services is de facto close to absolute zero, Voronenkov’s connection with the SBU ultimately resulted in Voronenkov’s connection with the US residency. For well-known reasons, the American intelligence was interested in the personalities of the former Russian politicians. Plus, the American intelligence services knew perfectly well that Voronenkov’s flight from Russia was not at all connected with political motives, but was connected exclusively with Denis Nikolayevich’s financial “adventures”. But as a "former deputy" Voronenkov, of course, was interesting. Well, and Maksakova - vdovek ... 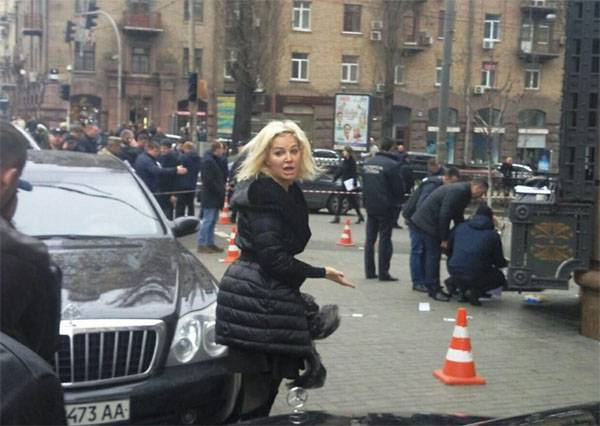 Curators from the US Central Intelligence Agency were connected to Voronenkov. The competent authorities of the DPR even publish their data. These are CIA residents in Kiev, Jason Stock (Stock) 1974, and Thomas A. Thliveris, 1967, born. In the mobile phone of Denis Voronenkov there was a contact recorded as “Jason”. This person contacted the deputy who had escaped from Russia several times. Denis Voronenkov himself called him. According to some reports, these people called Ms. Maksakova. In particular, Stoke and Tliveris expressed condolences to the inconsolable widow, apparently, not without instructions about what to say in case of interest from the press.

The competent authorities of the DPR have revealed the involvement of the abovementioned representatives of American intelligence in Ukraine in the training of officers of the Security Service of Ukraine and the General Directorate of Intelligence of the Ministry of Defense of Ukraine in the United States. The training was connected with the solution of the problems of the physical elimination of “Russian combatants in uncontrolled territories”.

As a fact: Voronenkov was interesting to the Ukrainian special services, first of all, as a money bag, and, of course, as a “denouncer of the bloody regime”. And the US special services are like a pseudo politician. Both those and others wanted, what is called, to fuck their dividends with Voronenkov. Some are money and anti-Russian dirt, others are anti-Russian dirt with an eye to the appearance of a “sacred victim”.

Within a few months of living in Ukraine, Voronenkov said, in principle, everything he wanted to hear from him. Sorry for the jargon, I licked both Kiev and Washington, declaring that in Russia there are "horrors and a complete lack of freedom", and in Ukraine, "aspiring to the West", there is a "fragrant democracy". Voronenkov received money for providing a “roof over his head”, and therefore the ex-deputy turned into a waste material for both the SBU and the CIA curators.

Pull further Voronenkov, on which the tooth and in the criminal world of Ukraine itself, the special services of Ukraine and the United States turned out to be clearly unprofitable. And why? What you need - got it. And if received, what to do next? And then - get rid of the uncomfortable load with an uncomfortable past. For this, the option that in Ukraine was worked out by Western intelligence services in the post-war period, when the curators of the Oun forest gangs used the members of these gangs themselves to eliminate the waste material, was quite suitable. As an artist’s candidature, a person should appear who is not in the circle of professional service workers, but at the same time they can be set on the right person. The surname came up - this is Pavel Parshev - “atoshnik”, who came under pressure from the Ukrainian law enforcement officers for violating the terms of the contract when performing service in the unit of the National Guard of Ukraine in Donbas. The choice is simple: a small fry that can shoot, but in the end will not be able to hand over anyone, because, firstly, it knows nothing about the chain, secondly, it itself is prepared for slaughter. And Parshev was brought to the place of murder by another “hera” - already from the members of the extremist “Right Sector” - Yaroslav Tarasenko, who, by coincidence, also had problems with both the Ukrainian law enforcers and the local criminals.

In other words, with the hands of Ukrainian nationalists, the figure on the chessboard was eliminated with a pretense of political sacrifice in almost the same way as it was done with another “political victim” - Boris Nemtsov. There is one promise: you only see what the Kremlin is doing - it eliminates the "opponents" both at its walls and in Ukraine ... One detail - in the murder of Nemtsov, the person who turned out to be in the back of the SBU also lit up, moreover, "protected" departments. And also purely "by chance" ... This is Ms. Duritskaya, who suddenly decided to walk with the politician across the bridge in Moscow. Where is this lover of walks now? .. Lost in the vast expanses of Square. Moor made a deal ...

An important question: why did the General Prosecutor’s Office of Ukraine decide to transfer all the arrows to Tyurin? This is a clear desire to lower the entire investigation into the drain hole, so that, as already noted, not to get an outlet on themselves. And do not merge the data that Voronenkov was "contacted" in Kiev with the CIA. More proof of who is behind the SBU. However, the information, like all secret, became clear thanks to the receipt of the DPR of important information about Voronenkov’s latest contacts and confirmation that Voronenkov’s security was identified through the GUR of the Ministry of Defense of Ukraine.

As a result: for decades the methods of work of the Western special services against Russia have not changed. And one of these methods is the use of nationalist groups not only as a living strike force on a real front, but also as the perpetrators of contract killings against "waste material". And these methods do not exhaust themselves for one simple reason: the existence of scammers-politicians, pseudo-fighters with the “regime” was, is and, unfortunately, will be. As they were, are and will be those who are for the promise of thirty new pieces of silver or for the preservation of old ones, ready to sell, anything, and everyone, up to their children, the nation and the Fatherland.

Ctrl Enter
Noticed a mistake Highlight text and press. Ctrl + Enter
We are
Lutsenko called the name of the customer Voronenkov murderNot long wedding danced
13 comments
Information
Dear reader, to leave comments on the publication, you must to register.