Who needs a bush "Patriot"? 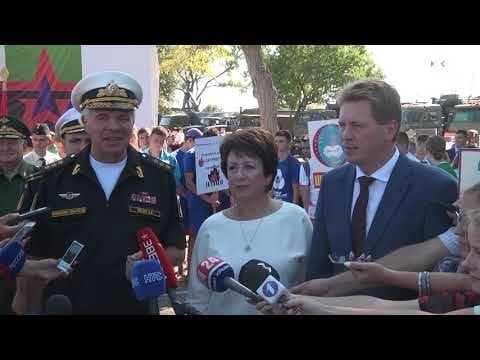 Attention! You are a participant in a social experiment. You are offered a choice of two approaches in the visualization of the people's feat. Take a deep breath, exhale, close your eyes, open your eyes, now we will begin. Participation in the experiment can damage your mental health!

Before you photo. This illustration is called "Monument to a healthy person." You see a green hill, its normal people call it the Mamayev Kurgan, on the hill stands a sculpture depicting a woman with a sword. "Motherland" - for normal people. 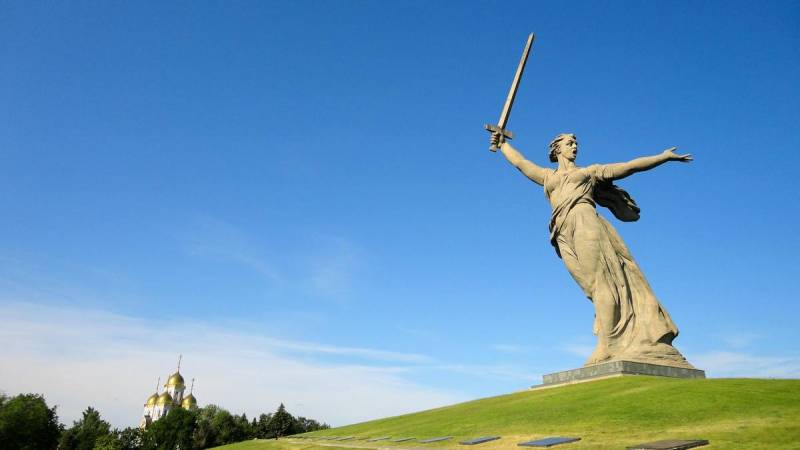 And now - attention. You are required to maximum concentration. Before you photo. It is called "Monument to an unhealthy person." It makes no sense to describe this composition, you yourself see everything. 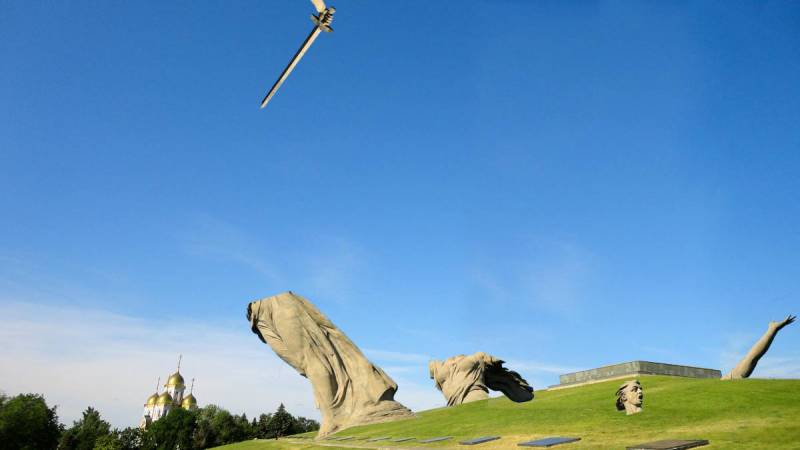 Thank you for your participation. The experiment is over. If you have an overwhelming desire to send the authors far away, congratulations, you are a normal person.

Now, despite the obvious initial crap that was simply necessary, we continue.

Do you remember this scandal with the Patriot park in Sevastopol in the winter of 2017? We recall. In three words.

“The surgeon, who is on the tick and in the skin, from 2011, cherished the mountain, which everyone calls Gasforta in honor of the general of the Crimean War. The Ministry of Defense, having listened to the Surgeon, wanted to build a branch of its giant-man-owned Patriot park on 267 hectares.

There were disgruntled lawmakers from Sevastopol headed by a man in a sweater (distantly similar to the people's mayor A. Chaly) and in one voice said “No pasaran Patriot and minoboroni”, and they “made” the Crimean spring, they can.

It turned out that juniper bushes on Gasfort are actually red book.

The Ministry of Defense looked at this circus and reluctantly invested 3 billion in Patriot. All went to catch their breath and smoke.

After some time, the person of the person in the sweater declared that they would build a sports park on the site of the not-built Patriot Park, and that juniper bushes are not red book at all.

Then a man in a sweater appeared again and declared that the Patriot would be just right on the 30 coastal battery, the park is needed, and you just need to reconsider everything from beginning to end.

True, no one was embarrassed that the 30-I battery is not a museum at all, but an operating object.

The acting governor, who already knew that he was not at all, supported this idea, and a couple of days before the elections, he opened Patriot Park on an abandoned part of the 30 battery.

Final credits, thank you all, disagree?

Seriously, Aleksey Chaly, regarding the construction of the park on Gasfort, said: “I think that this project cannot be implemented at this place, it must be implemented in another.”

And then there was a proposal to move to the North side and build a park there.

Many media outlets noted in this proposal that the Patriot had dried out 130 times - from 267 ha on Gasforte to 2 ha on the 30 battery.

The figure for comparison: the area of ​​the park "Patriot" in the Moscow region - 5 414 ha. Five thousand four hundred and fourteen hectares.

It is clear that even 267 ha on Gasfort in comparison with the “Patriot” is so, a public garden. But 2 hectares ...

It was immediately clear that the political will of the opponents of the park “overwhelmed with a cry” the will of supporters, and mainly, the Black Sea Fleet Commander A. Vitko and the Ministry of Defense in general.

The idea of ​​a hasty discovery of the Patriot park at the place of the abandoned part was “conquered” by the former acting O. D. Ovsyannikov.

He told the media: “Together with the commander of the Black Sea fleet Alexander Vitko <...> approved the layout of facilities on the first site of the park - the 30th coastal battery. "

And already September 8, for 2 the day before the election itself, D. Ovsyannikov made the same solemn discovery with a pomp and a breakfast at 300 schoolchildren. Thus, the victory of opponents of "surgical" intervention in the politics of Sevastopol on 3 billion rubles recorded in the form of a strange section, which was called the park "Patriot".

At the opening, the commander of the Black Sea Fleet A. Vitko and the chairman of the legislative assembly E. Altabaev unanimously stated to the cameras that the Patriot park would be 5 clusters (the fashionable word “cluster” can be replaced with the usual “piece”) located in different parts of Sevastopol :

Without a clue, the eye is able to catch some fragmentation in the new project of the Patriot without a hint. And the inveterate conspiracy theorist will see in this the realization of the Caesarian Maxim "divide and conquer." Seekers of the beautiful will simply admire the beauty of the original “divide et impera” and go on to take their turn at the local history museum.

Or participate in the exciting patriotic quest "Collect" Patriot "in one day."

Now, we hope, the foolish photomontage on the second photo is clear to you.

For clarity, we present a photo of the torn off project of the Patriot Park on the Gasfort Mountain. 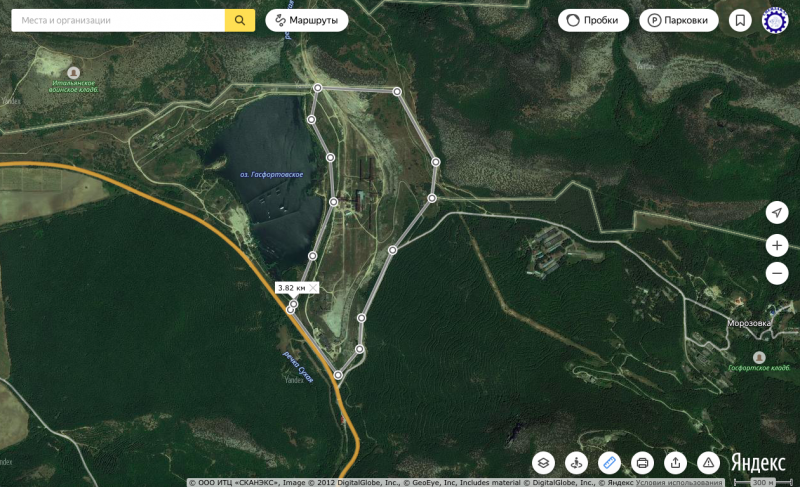 And this is at the saved scale of the new “Patriot”. We recommend using the functionality of "Magnifier". 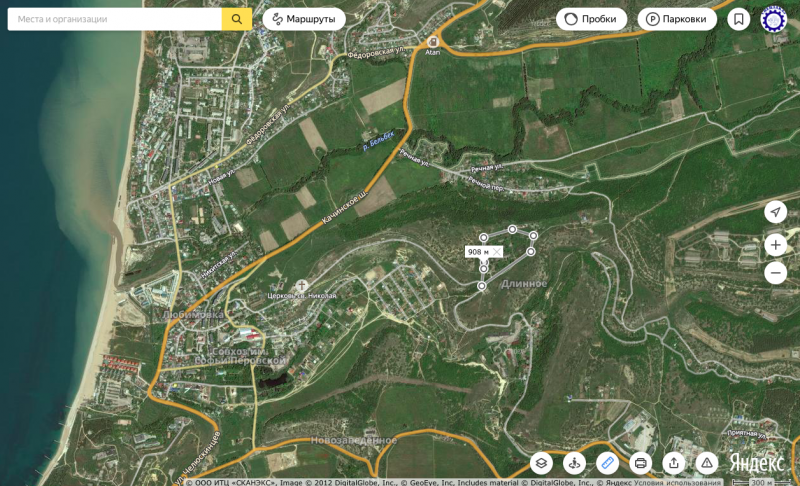 The imposition of one object on another shows the degree of drying up the idea of ​​"Patriot". 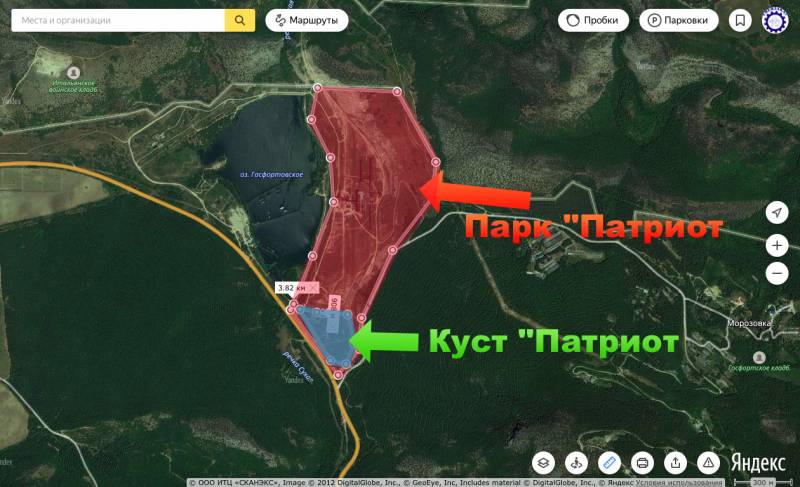 And if you add to the size of the "Patriot" distant location from the tourist routes, add up with the concept of atomization (translation - discord into atoms), then you can derive an amazing formula: "How to destroy the project."

We entered the territory ... as it were, rather, the place “Patriot” from the side of the tower battery. A hill dug in with trenches is like the back part of a “park”. 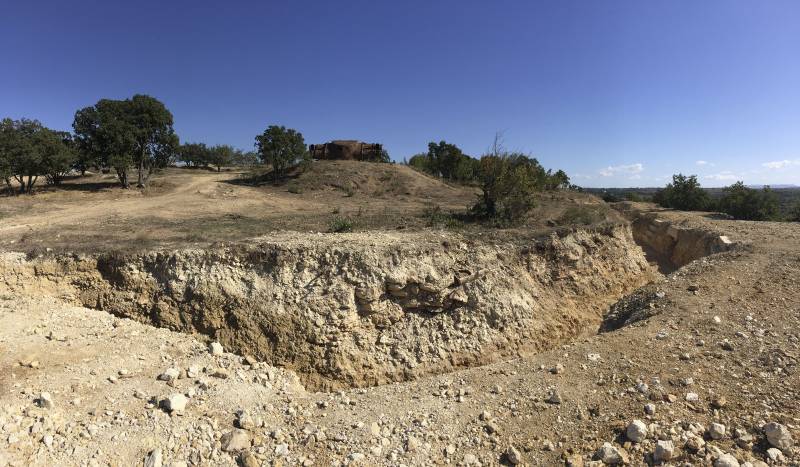 This is the 30 battery itself, the active object of the RF Ministry of Defense, enclosed by barbed wire. 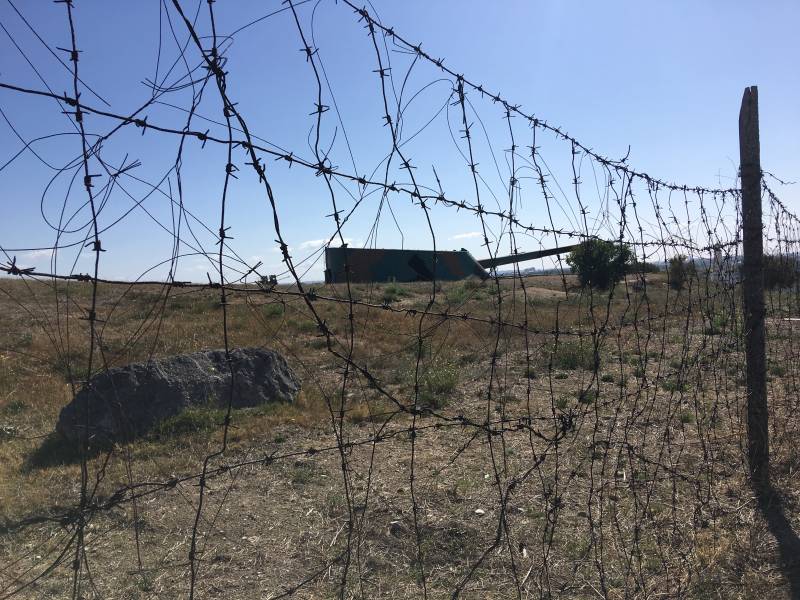 Sports ground and antenna city in one - this is inevitable, given the small size of the territory. 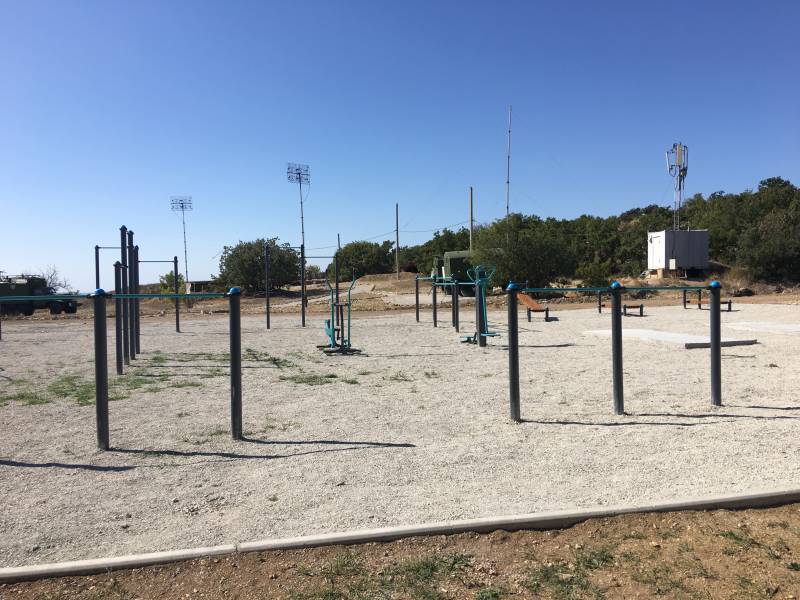 This is the facade of the object - a banner stretched on a building with peeling plaster. The facade alludes to innovation and modernity, isn't it? 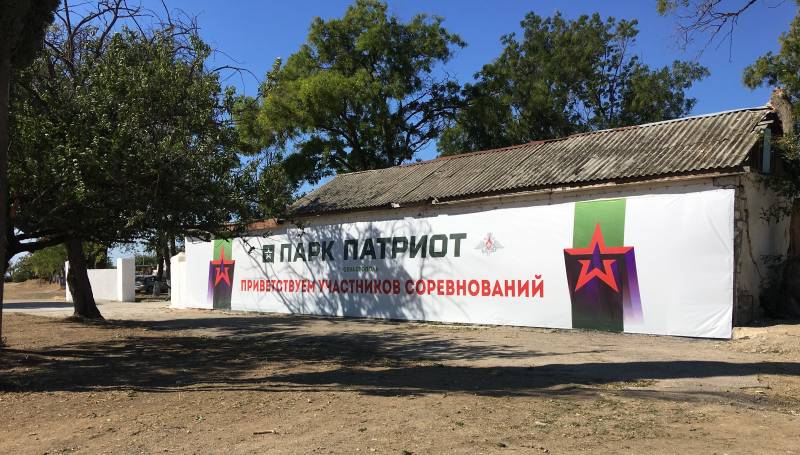 This is the park parade ground. Here you can see what was (in the background) and what will happen (in the front). 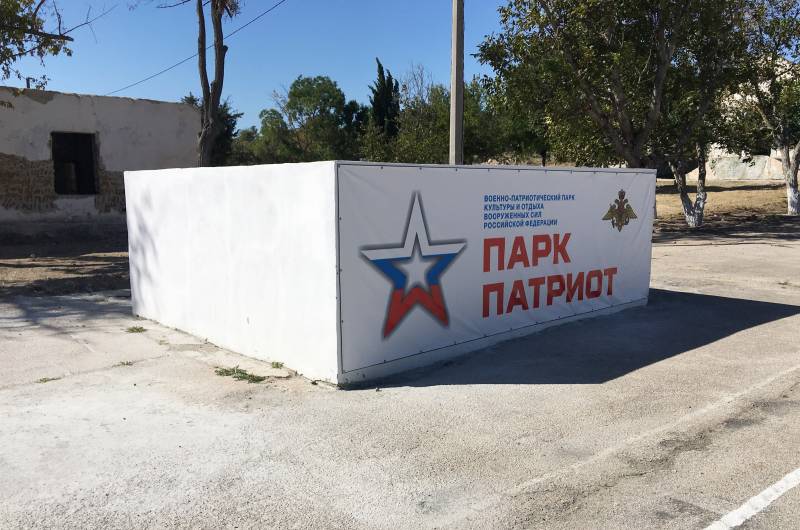 Continuation of the parade. 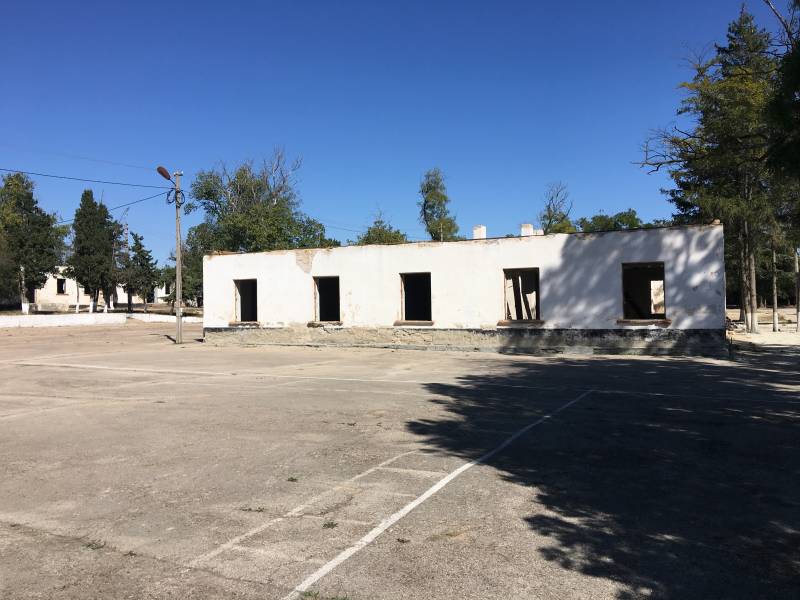 This is a legacy from the once-operating military unit. 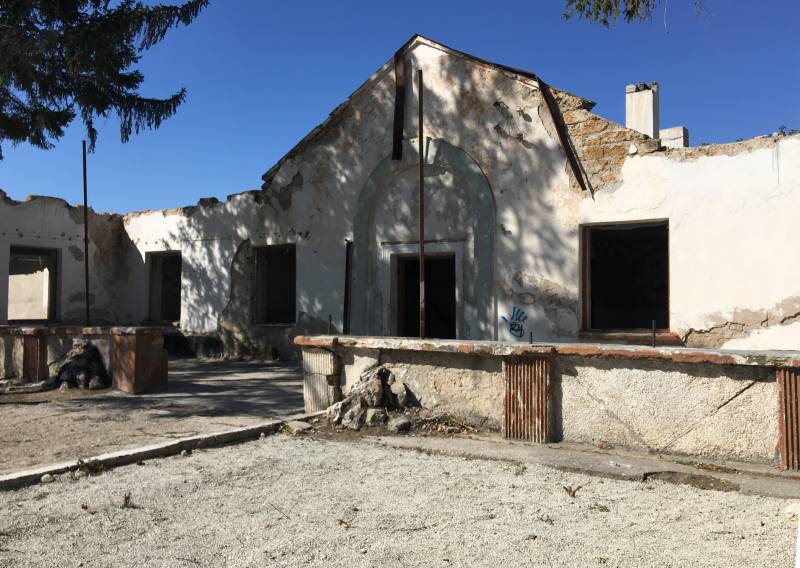 Alley leading to the monument to the gunners of the 30 battery. 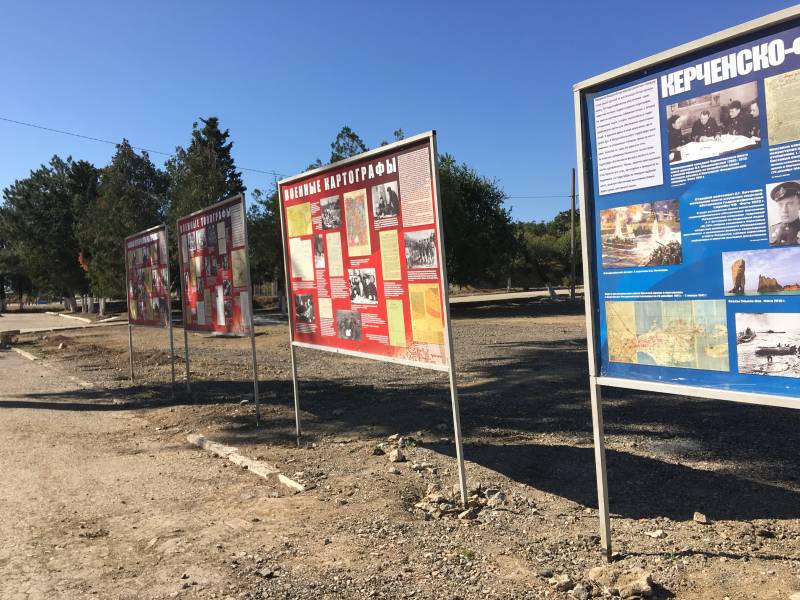 Luxurious, isn't it? And now the mayor of Sevastopol solemnly opened this place, proudly calling it Patriot Park.

The evil genius who forced the Defense Ministry to apply the “do what you want, just roll back” formula to the Patriot park deprived Sevastopol of the opportunity to have a unique cultural and patriotic center, the only one in the Southern Federal District. According to the project, it even had to house a branch of the presidential library, as well as leisure areas for the whole family.

The conception of a patriotic upbringing object scattered around the city, which is being implemented, will create a lot of difficulties for tourists who plan to see all the pieces of the Patriot in one visit to the Crimea.

Please note that the fleet commander Vitko speaks openly about the search for equipment to be placed in all the clusters. That is, everyone is happy with everything.

Let's see what happens. It will be especially interesting to see the technique of the times promised by the admiral. first defense of Sevastopol. That is 1855 of the year. With the second defense, everything is clear, there is no doubt that it will be found, but there are doubts about the first one.

Okay, let's miss these promises, in the theater of the absurd is not a sin and to make a reservation.

And if everything will be the same as on the “Patriot bush”, then the savings will be guaranteed, and at a frantic scale.

The builders of the “park” are already faced with logistical difficulties - it is more difficult to carry out construction and repair work at five points scattered around the city than in one with convenient access.

Following the “traditions” of the leadership of the military memorial cemetery on the 35 battery, next season the quest “Get the patriot piece by piece” can become popular among young people. Recording participants is about to begin ...

Nevertheless, the mayor of Sevastopol Ovsyannikov, who was elected by an almost absolute majority of residents who came to the polls, confidently pursues a policy that says that the Crimea did not need the original idea of ​​the Patriot park, even if not on such a scale as in the Moscow Region.

We can only come to terms with this regrettable fact. And express the hope that the Red Book junipers will not suffer during the construction of the tourist complex and equestrian center.

Well, carefully monitor how the authorities will water and fertilize a two-hectare patriotic bush. Suddenly, what will grow?