Yakov Pavlov. One of the most famous heroes of Stalingrad

October 17 2017
26
Yakov Fedotovich Pavlov forever inscribed his name in history of our country, becoming one of the most famous heroes of the Battle of Stalingrad. Mention of it can be found today in any history textbook. Commanding a group of fighters, in the autumn of 1942, he organized the defense of a four-storey residential building on the square of 9 in January in the center of Stalingrad, this house went down in history as Pavlov’s house. The house itself and, of course, its defenders, became symbols of the heroic defense of the city during the years of the Great Patriotic War.


Yakov Pavlov was born exactly 100 years ago, October 4 (October 17 in new style) 1917 in the small village of Krestovaya (today it is the territory of the Valdai district of the Novgorod region), in an ordinary peasant family, by nationality - Russian. A few days after his birth, the October Revolution took place, followed by a civil war. Jacob's childhood was difficult enough, which was true for the whole country. He managed to finish only primary school. In 1938, he received a summons and was drafted into the ranks of the Red Army. He met the beginning of World War II in the army, fought from June 1941. He met the war at Covel in Ukraine as part of the troops of the South-Western Front.

The plan of the summer-autumn campaign 1942 of the German fascist troops provided for the capture of Stalingrad and the attack on the Caucasus. The battle of Stalingrad began on July 17, 1942, from that day until November, 18, the Germans did not stop trying to master this major administrative, industrial and transport center on the Volga. According to the plans of Hitler, the German troops were to capture Stalingrad, which is of great strategic importance, for two weeks of fighting, but the stubborn resistance of the Soviet troops in the city destroyed by the fighting confused all the plans of the Hitler generals. 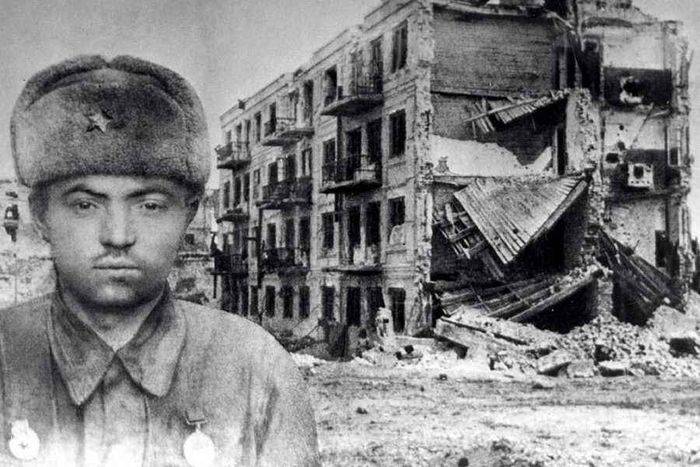 In 1942, Yakov Pavlov was sent to the 42 Guards Regiment of the 13 Guards Rifle Division of General Alexander Rodimtsev. After the defeat of the Soviet troops near Kharkov, this division was assigned to the left bank of the Volga, where its re-formation took place. During the reorganization of the division, Sergeant Yakov Pavlov was appointed commander of the machine-gun department of the 7 Company. In September 1942, Rodimtsev's division became part of the 62-th army of the Stalingrad Front.

The division was tasked to cross the Volga and knock out German troops from the coastal strip, to occupy and firmly defend the central part of Stalingrad from the enemy. On the night of 14 on 15 in September of 1942, the vanguard of the 42 Guards Regiment managed to cross the Volga and immediately fought with the enemy. On September 15, the soldiers of the regiment fought off the central railway station, giving the opportunity to cross the Volga to the remaining units of the 13 Guards Rifle Division. September 16 of the 39 Guards Regiment's War, supported by the combined 416 Infantry Regiment of the 112 Infantry Division, captured the summit of Mamayev Kurgan during an assault and stubborn battles. From 21 to 23, the September 13 War of the Guards Rifle Division, supported by front artillery, withstood the strongest onslaught of the enemy, preventing the Germans from reaching the Volga in the central part of the city.

It is in the central part of the city in the area of ​​the square of January 9 (today Lenin Square) the four-storey brick house is located, which later went down in history. It was the home of the regional consumer union, house №61 on Penzenskaya street. That he will go down in history as the house of Pavlov. Next to it was the Sovkontrol’s House, the future home of Zabolotny, a mirror copy of Pavlov’s house. Between these two houses, there was a railway line to Gosmelnitsa No. XXUMX (Gergardt-Grudinina mill). Both buildings played a key role in the defense of the square and the approaches to it. In the area of ​​these buildings, the 4 th Guards Rifle Regiment of Colonel Ivan Yelin defended, who ordered the commander of the 42 Infantry Battalion, Captain Alexei Zhukov, to capture the houses, turning them into strong points. 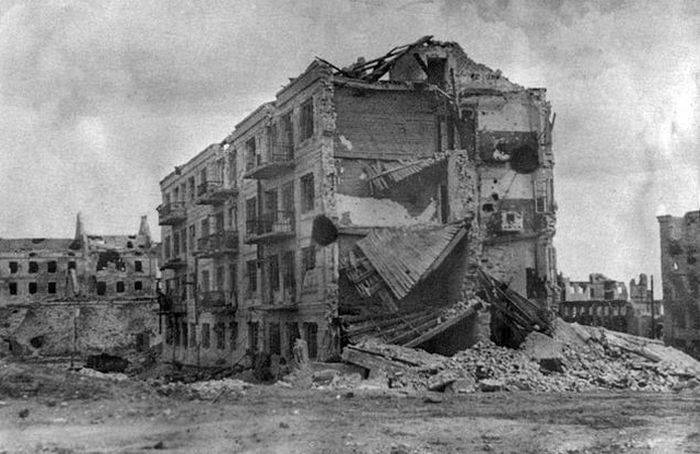 Pavlov House after the end of the Battle of Stalingrad. In the background - Gergardt Mill
Oblpotrebsoyuz House was a four-story building with four entrances. It was built in the second half of the 1930-ies by the architect Sergey Voloshinov, who died on September 27 of 1942, along with his wife, who was expecting a child, this happened in their house on Pugachevskaya street during the regular bombing of Stalingrad. The Oblpotrebsoyuz House was considered one of the most prestigious in the city, other elite residential buildings were located next to it: the NKVD House of Workers, the Telecommunication House of Workers, the House of Railwaymen and others. Specialists of industrial enterprises and party workers lived in Pavlov’s house.

Both houses were very important, the Soviet commanders correctly assessed their tactical importance for building defense in this sector. From the houses, the surrounding area was clearly visible. It was possible to observe and fire at enemy positions in occupied parts of Stalingrad: to the west to one kilometer, to the north and south - and even more. Also from the houses it was possible to see all the ways of the possible breakthrough of the Nazis to the Volga, to which it was within easy reach. To capture the houses, two groups were created: the group of Sergeant Pavlov and Lieutenant Zabolotny. Zabolotny’s house was later burned out and blown up by the advancing German troops, which collapsed, burying the Soviet soldiers who defended it under the ruins.

At the end of September, 1942, in the reconnaissance and assault group of Pavlov, were also the corporal V. S. Glushchenko and the Red Army soldiers A. P. Alexandrov and N. Ya. Chernogolovy. Pavlov's group was able to penetrate the house and capture it, knocking the Germans out of it. A handful of soldiers stayed in the house for three days, after which reinforcements arrived to it: machine-gun platoon of Lieutenant Ivan Afanasyev (7 soldiers with one heavy machine gun), a group of senior sergeant Andrei Sobgaydy’s armored soldiers (6 soldiers with three anti-guns and four anti-tank guns), four ammo men, four ammo, and four ammo squadron squadrons, 4 calves, and amy of four anti-tank guns, 4 ammo, 4 ammo, 4 ammo, 4 ammo, 4 ammo, 4 ammo, 4 ammo, 4 ammo, 4 ammo, and 16 ammo; under the command of Junior Lieutenant Alexei Chernyshenko and three machine gunners. The house also had a telephone connection and organized ammunition. This small garrison stayed in the house for almost two months, preventing the Germans from reaching the Volga in this sector of defense. During the battle in the basement of the house, civilians were also hiding (about 30 people) who could not evacuate from it, some of them were seriously injured as a result of shelling and bombing. 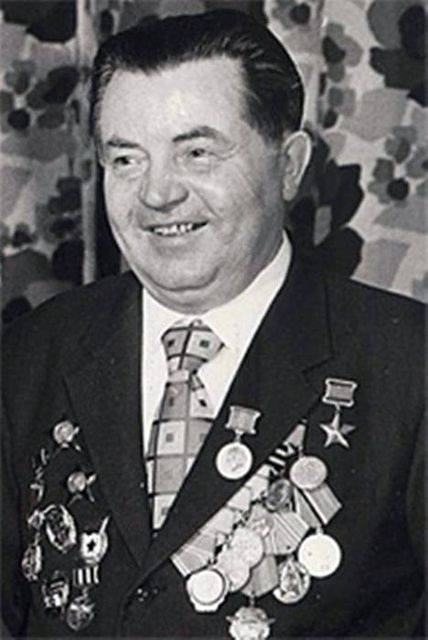 Almost all the time the Germans bombarded this house with artillery and mortar shells, air strikes were inflicted on it (as a result of blows one of the walls was completely destroyed), continuous attacks were carried out, but the Germans could not take the house. Soviet soldiers competently prepared him for a perimeter defense, during attacks they fired at the enemy from different places of the house through prepared embrasures made in the bricked-up windows, as well as breaks in the walls. As soon as the Germans approached the building, they were met by dense rifle-and-machine-gun fire from various firing points on different floors of the building, grenades flew in the direction of the Nazis.

At the same time, lieutenants Afanasyev, Chernyshenko (died during the defense) and sergeant Pavlov managed to establish good fire interaction with the strongholds arranged in the neighboring buildings - the house of Zabolotny and the mill building where the command post of the 42 rifle regiment was located. A significant role in the competent organization of defense was also played by the fact that Afanasyev and Pavlov were experienced fighters, Pavlov could be called a professional soldier, yet he was in the army since 1938. Significantly simplified the interaction of strongholds and the fact that on the third floor of Pavlov’s house an observation post was equipped, which the Germans could not destroy. Later, the commander of the 62 Army, General Vasiliy Chuikov, recalled: "A small group of Soviet soldiers, defending one house, destroyed the enemy soldiers more than the Nazis lost when they took Paris."

Great help to the defenders of the house provided prepared by them spare positions. In front of the house itself there was a cemented fuel depot, to which the defenders managed to dig an underground passage. And about a meter away in 30 from the house there was a hatchway leading into the water tunnel, to which an underground passage was also dug. It was in this way that the defenders of Pavlov’s house relatively unnoticeably and safely could receive the necessary ammunition and food for defense. During the shelling, all the defenders of the house, except for the military guard and observers, went down to the shelters. After the cessation of shelling, the entire small garrison once again held its position and met the enemy with fire. 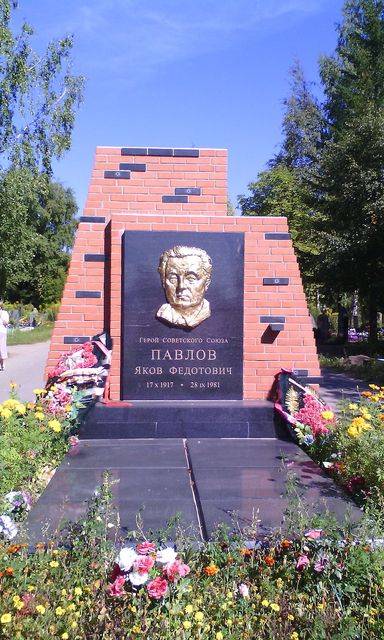 Pavlov's grave in the Western cemetery of Veliky Novgorod
The defense of the house lasted about two months before November 24, 1942, when its defenders left it and the 42 regiment, along with other units, launched a counteroffensive. During the heroic defense of Pavlov’s house, only three of his defenders were killed: Junior Lieutenant Alexei Chernyshenko, Sergeant Idel Heit and Red Army soldier Ivan Svirin. However, many defenders of the house were injured. Yakov Pavlov himself was seriously injured in 25’s leg on November 1942 of the year during an attack on the German positions.

After returning from the hospital, Sergeant Pavlov fought as worthily as he did in Stalingrad, but in artillery. He was the commander of the intelligence unit in various artillery units of the 3-th Ukrainian and 2-th Byelorussian fronts, which successfully reached Stettin, passing the Great Patriotic War from the first to the last day. For his military achievements, he was awarded two orders of the Red Star, as well as numerous medals. June 17 Junior Lieutenant Yakov Fedotovich Pavlov was awarded the honorary title of Hero of the Soviet Union and was awarded the Gold Star Medal (No. XXUMX), by which time he had already joined the Communist Party. For the award, he was presented precisely for the feat, committed in Stalingrad in 1945 year.

After demobilization from the army in 1946, Yakov Pavlov returned to his homeland. He worked for a long time in the city of Valdai of the Novgorod region, was the third secretary of the district committee of the party, graduated from the Higher Party School at the Central Committee of the CPSU. Three times he was elected deputy of the Supreme Soviet of the RSFSR from the Novgorod region. After the end of World War II, he was also presented to the Order of the October Revolution. In the postwar years, he often came to Stalingrad, where he met with local residents who survived the war and restored the Volga city from ruins. Not only Yakov Pavlov, but all the other defenders of the house have always been the most dear guests of the townspeople. In 1980, Yakov Pavlov was awarded the title “Honorary Citizen of the Hero-City of Volgograd”.

Yakov Fedotovich Pavlov passed away on September 28 on 1981, at the age of 63. Most likely, his front-line injuries contributed to the relatively early demise of the hero. He was buried in the alley of the heroes of the Western cemetery of Veliky Novgorod. Currently Yakov Pavlov’s name is a boarding school for orphans and children left without parental care in Veliky Novgorod. Also the streets in Veliky Novgorod, Valdai and Yoshkar-Ola were named after Yakov Pavlov.