How do data on Russians get to the terrorists in Syria?

October 17 2017
39
Recently, episodes of the following nature have attracted attention: the number of publications that has obviously become more frequent in the releases of the Ukrainian special services and on the Ukrainian media pages related to the activities of citizens of the Russian Federation in Syria. Especially frequent were publications devoted to the activities of the private military company (PMC) "Wagner". Taking into account the fact that any PMCs, to put it mildly, do not differ in excessive publicity, the facts about the Wagner PMC data (it is the Wagner PMC), which are at the disposal of the Ukrainian special services, look very interesting.

Data on the “growing losses” of PMCs Wagner in Syria are actively published on the portal called CIT (Conflict Intelligence Team) and is a community engaged in the collection and analysis of information relating to contemporary conflicts. Moreover, it is noteworthy that representatives of the Conflict Intelligence Team focus exclusively on those conflicts in which the Russian Federation is involved in one way or another. In the most recent place, the Syrian conflict is in the main place, about which CIT issues materials in a mode of reports. The Security Service of Ukraine, headed by Vasyl Hrytsak, is already referring to these materials. By the way, the publications are in Russian and English, which looks as reports not only to the SBU, but also to those who are in charge of the work of the Ukrainian Security Service today.

From the last on the CIT site:
In August-September, 2017, with the support of the Russian Aerospace Forces of the Russian Federation, the pro-Assad forces successfully developed an offensive in the territories in eastern Syria controlled by IG militants (* prohibited in the Russian Federation - author's comment). Along with reports of the release of settlements in social networks and the media, information about the death of Russian mercenaries began to appear more and more often. Next, we list the fighters of the PMC Wagner who died during the fighting in Syria over the past two months. 24 is a summer native of the city of Troitsk. In the photo (published on the site - author's note), accompanying the report on the death of Vitaly, several medals of the “Wagner Group”, as well as the departmental medal of the Russian Defense Ministry “For the return of the Crimea” are seen at once. Killed 22 September.

Further reported on the alleged deaths of other members of the PMC Wagner. Such names as Krizhanovsky (N.Novgorod), Nurullin (Kazan), Gladyshev (Perm), etc. are called.

Formally, everything looks as follows: representatives of the Conflict Intelligence Team portal that has been mentioned several times literally monitor thousands of websites and pages of Runet social networks day and night, find there information about the “wounds, deaths, funerals” of representatives of a private military company or “Russian military”, then transfer them to your website data published on external portals, and then this data flows into the SBU.

However, this is only formal. Often there is a situation when the head of the Security Service of Ukraine, Vasily Gritsak, during a briefing (press conference) cites materials about the death in Syria of people who allegedly have been involved in WWNP PMCs. These materials are then referred to by the Ukrainian media and foreign portals. Here is the material from October 11 on the official website of the SBU:
The Security Service of Ukraine continues to publish the data of mercenaries who participated in hostilities against the forces of the antiterrorist operation (“ATO” in the Donbas, author's note) as part of the PMC “Wagner”.

We are aware of many foreigners involved in the crimes in the composition of this terrorist group (this is how the Wagner PMCs are referred to by officials in Ukraine, - VO). The established data on persons who have been with Wagner PMCs in Ukraine since 2014 summer, and 2015 in Syria since August, regularly transmitted to the SBU by the appropriate channels and partner special services.

The Security Council of Ukraine, with the permission of the investigators, will publish the personal data of six Serbian citizens, in respect of whom irrefutable evidence of participation in the Wagner PMC has been collected. This is just the beginning.

Photo from the site of the SBU (graphic changes - "IN"): 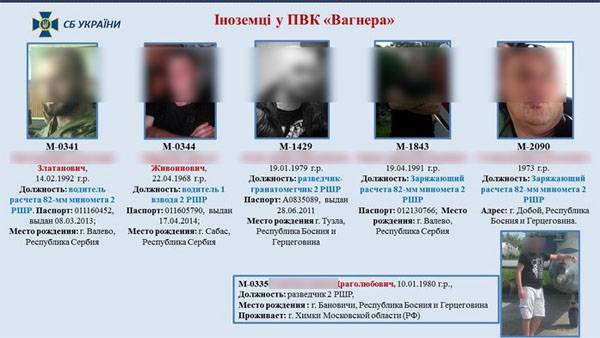 The words of Gritsak about the transfer of data to the Security Service of Ukraine “by the appropriate channels” and “partner services” draw attention to themselves.

Of course, a certain part of this kind of information can be easily obtained in open access on the vast expanses of the Global Network. After all, there are people who, in pursuit of subscribers, merge that information, which hardly needs to be shared with millions of users, simply because not all of them came to the page to just like it ... However, there are some nuances that they say that it is not only through the monitoring of social networks that specific information is obtained about those who may be part of PMCs.

One of these nuances is the discovery in ISU clothes of the ISIL militant (*), which was eliminated in Deir ez-Zor province, a list with information on the PMCs of Wagner. Another similar nuance is the receipt by ISIL militants (*) of accurate data on the finding of Russian General Valery Asapov, Colonel Valery Fedyanin, which (the Russian military) was hit with a targeted blow. Another detail - not so long ago, on our website, footage from Syria was published - the fighters of the CAA drove the igilovtsy from the field camp. Interesting finds were found in this camp, including the Ukrainian flag hanging on the wall. By chance he was there? Not at all. Representatives of the same Jemilev natsbat, who had been preparing for a breakthrough to the Crimea, lived in the camp of terrorists. This battalion was originally fostered not without support in the form of foreign funding and the work of the Ukrainian special services.

Returning to the data on Russians discovered by the liquidated ISIS (*) militant, I must say that a remarkable photo was published on the Directorate-4 channel about a month ago. Next to what was left of the terrorist, there are papers that represent a printout of the texts of the Fontanka publication with data from one of the representatives of this publication. On paper, all the personal data of the Wagnerites right up to their call signs. 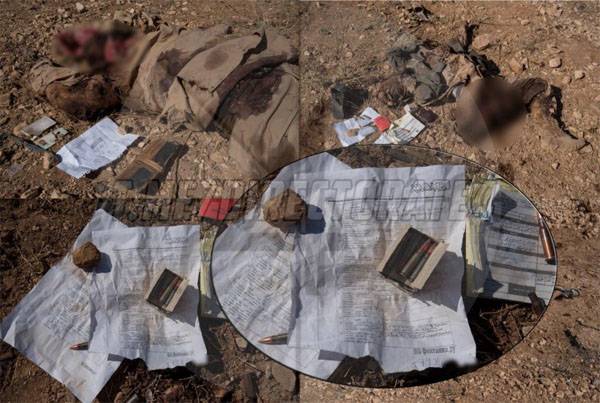 On the Telegram channel, Directocrate 4 was informed that they had contacted the St. Petersburg resource, but there they refused to discuss a photo from Syria, as they refused to comment on the publication of data on representatives of PMCs. By the way, the list on “Fontanka” is still “hanging” in the open access mode. For obvious reasons, I will not give you a link, anyone can google if they wish. There are even operational map of PMCs Wagner, scans of passports and much more. It turns out, a sort of analogue of the Ukrainian site "Peacemaker"? ..

If you put all these facts together, then it can be stated that an extensive network operates in Syria, whose mission is to inflict as much damage as possible on not only the government forces of the CAA, but also specifically on the Russian Federation (did you discover America ...) - then attempts to strike at Russian servicemen or representatives of a private military company. As a fact: the connection of this network with structures in Russia and Ukraine is traced.

What is the bottom line? The information is taken into account by terrorist groups, which, as the representatives of the General Staff of the Armed Forces of the Russian Federation have repeatedly reported, enjoy the clear support of the American intelligence forces and US special forces operating in the territory of the SAR. It is difficult to assume that the igilovtsy on the front line are independently self-sufficient Runet and social networks in order to identify the personal data of those who are fighting against them. Now ISIS (*) on the frontline is clearly not up to it. It is also difficult to assume that the Dzhebhat an-Nusra igilovtsy and militants (* banned in the Russian Federation) who are cornered have the ability to carry out active reconnaissance activities in the territories they are not controlled to receive information about the plans of relocation of Russian military advisers.

This is to the question that the support of international terrorism has acquired the features of a global campaign that includes whole state formations, organizations and, how terrible it sounds, those who consider themselves to be in the journalistic community ...

Ctrl Enter
Noticed a mistake Highlight text and press. Ctrl + Enter
We are
PMC Wagner and St. Petersburg FountainPrivate military companies: legalize or continue to pretend that they are not?
39 comments
Information
Dear reader, to leave comments on the publication, you must to register.