Crimea is not for sale 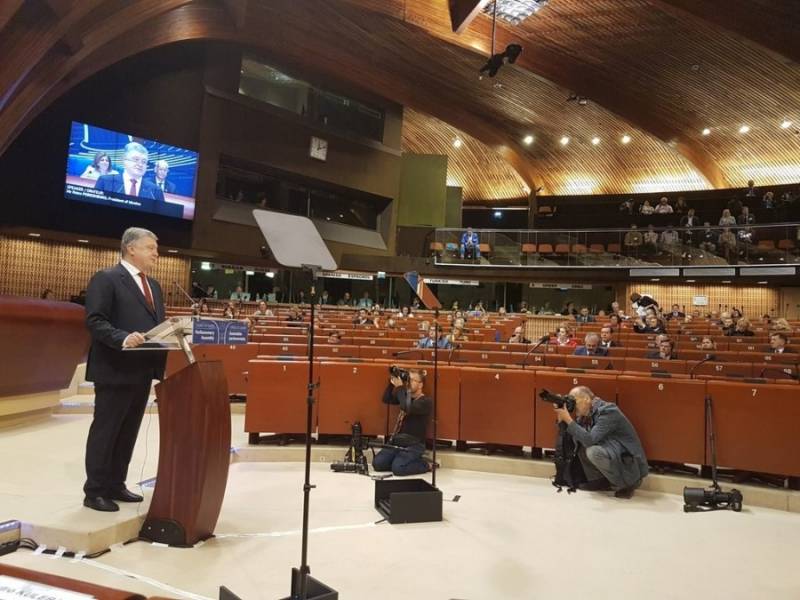 A member of the Italian delegation, perhaps the future president of the assembly, made a resolution to lift the sanctions on Russia, ignoring the amendments made by Ukraine. The resolution was adopted by a majority vote. This means that as early as January, the right to vote and full participation in PACE, which was taken away in 2014, could return to Russia.

For reference: PACE is a “recommendatory” organization that is a member of the Council of Europe. It is established, as a parliament, with deputies representing the states and its largest parties, all 636 deputies (318 representatives and 318 their deputies). Countries themselves appoint parliamentarians. From Russia, 18 people are sitting in PACE - deputies of United Russia, the Communist Party of the Russian Federation, the Liberal Democratic Party of Russia and Fair Russia.

The main claim to the Russian delegation in 2014 was the annexation of the Crimea. She was deprived of the right to speak and vote at meetings of the Assembly, to participate in the work of the governing bodies, as well as in election observation missions. In January 2015, she took part in the PACE session for the last time, but left her immediately after the deputies decided to extend the sanctions.

At the same time, for the first time, the head of the Russian delegation, State Duma Speaker Sergei Naryshkin, announced the possibility of Russia leaving the Council of Europe, whose structure is PACE, and stopping the payment of a contribution, the amount of which is approximately 32 million euros. As a result, in 2016, the fee was paid, but in the middle of 2017, transfers ceased. “The Council of Europe is losing a“ very large amount ”because of Russia's decision to suspend payments to a part of the organization’s budget for 2017 a year,” said PACE rapporteur for the Bureau, Ian Liddel Granger.

In fact, until decisive actions to stop financing the PACE, the deputies did not react at all to Russian intentions.

And only after the cuts made the budget cut,

after some two days, the deputies looked at the Russian question differently.

It is worth noting that over the course of three years the reasoning about whether Russia needs to participate in the Assembly’s meetings in general has not ended, because it does not give actual results. And this is true, the recommendatory nature of the assembly is not something without which the foreign policy of the state would be implemented with obstacles. However, PACE is part of the Council of Europe, an influential international body of 47 states. And all this is not at all necessary, but it is better to be friends with influential people than to be in a quarrel. Then questions, for example, laying gas pipelines will be solved faster and more fervently. But, I repeat, the very fact of participation in PACE meetings is purely an amateur matter.

There is another point - the ECHR. Matvienko said she would not recognize his decisions if the head of the court was elected without Russia's participation. But this is already a fairly fair statement: some Russian organizations and individuals like to use the services of the ECHR. And they should be greatly upset if Moscow considers judicial decisions illegitimate in the Russian Federation.

But back to the issue of Crimea. Earlier, at a speech in the same PACE, Milos Zeman, the president of the Czech Republic, suggested that Russia “buy out” the Crimea from Ukraine. Ukraine has bucked, and Poroshenko said that "no oil and gas" in exchange for the peninsula is not going to take.
And no one offers - the decision of the people for that and the decision of the people, that it is free. Only here, in PACE itself, Zeman’s idea was decided to use, and they are still ready to “sell” the Crimea together with all their arguments three years ago, the price of the issue is the notorious 32 million euro, Russia's annual contribution to the European organization. The fact is that if the measures against Russia were taken in connection with the Crimea, and now they will be removed, then the question of the peninsula will be relegated to second place.

For three years, not only the political agenda of Europe has changed, leaders and representatives of countries are changing, many of which objectively assess what happened in Crimea, the mood of Russia and the level of adequacy of Ukraine. Start of European recognition of the fact historical justice laid. And, unfortunately, for some neighbors, this will not even be paid.

Ctrl Enter
Noticed a mistake Highlight text and press. Ctrl + Enter
We are
A great interview with Sergey Lavrov: about Ukraine, Obama and IranHow I was held in this election
33 comments
Information
Dear reader, to leave comments on the publication, you must to register.