October 16 2017
8
What do we know about the exploits of WWI sappers? About one such forgotten feat - this article.


In the Naroch operation 5 - 17 of March 1916 of the year during the fighting near the town of Pastavy of the advancing group of Generals cavalry corps MM Pleshkov (1 and 27 army, 1 Siberian Horse Corps) 7 sappers th Siberian engineer battalion had to blow up enemy wire barriers three times. The first two times they were able to successfully accomplish the combat mission, but the passages in the wire obstacles created for the movement of their infantry were not used — the direction of attack was changing at the last minute. For the third time, it was already dangerous to go to the enemy’s wire fence without any special precautions - the Germans had time to take increased measures to guard their barriers.

Without waiting for artillery fire.
It was decided that two hours before the wire obstacles were blown up, the artillery would start bombarding the approaches to the enemy’s trenches with shrapnel fire, and by the time the demolition bombers arrived, they would transfer the fire to the trenches and the space behind them. To help the sappers had to temporarily attached to the corps heavy artillery. But there was no written order given to her, there was only an oral agreement with the battalion commander - and this was a major mistake.

It should also be noted that the sappers, in the number of 3 - 4 companies, were already concentrated in the forest near M. Volotski in February - they were ordered to prepare for the preparation of the attack wickers and ladders (should be used to block the enemy wire fence - but not one was not used).

The demolition men should have advanced at midnight from 12 to 13 in March.
After making the passages in the barriers of the 4 th Siberian rifle regiment, the forest strongly fortified by the enemy, located between the villages of Malye Volotski and Buchelishki, was to attack.

But for some reason, the artillery did not open fire, and the team of X-NUMX demolition men at 25-officers, about 2 in the morning moved forward. I had to go through the thawed marsh: on top of the water, then ice, and deeper - already a quagmire.

Heroes-bombers.
When approaching the wire fence on the left flank of the team, enemy reconnaissance agents appeared - they surrounded two extreme sappers, carrying one of the charges, and demanded that they surrender.

Seeing that he could no longer delay, the team leader gave the order to run to the barriers and lay charges on them. The Germans opened a strong rifle, machine-gun, mortar and artillery fire. At this moment, the Russian heavy artillery, remembering that it was necessary to help the sappers, opened fire on the approaches to the enemy’s trenches.

As a result, from 9, the remaining 3 charges were laid under the wire and blown up, 5 was laid but not blown up and 1 was carried away by the sappers back (the soldiers who carried off this charge could not explain why they put themselves at this unnecessary danger).

Of the 25, the team members returned to their own five (of which only one was not injured). From the fire of the Russian artillery, unexploded charges detonated - and eight passes were formed in the enemy's wire fence.

4 th Siberian Rifle Regiment, taking advantage of the aisles, safely and almost without loss, attacked and captured the forest.

Thus, the feat of those who did not want to surrender to the senior non-commissioned officer Kozlov and his comrade not only distracted the enemy’s attention and stimulated the demining team to take more active actions - he awakened his artillery from the “hibernation”, which made it possible to lay most of it under cover of its fire. charges that under the influence of the same fire were successfully blown up.

As a result, the attack was crowned with success, and the feat of the sapper heroes saved the blood of the Russian infantry. 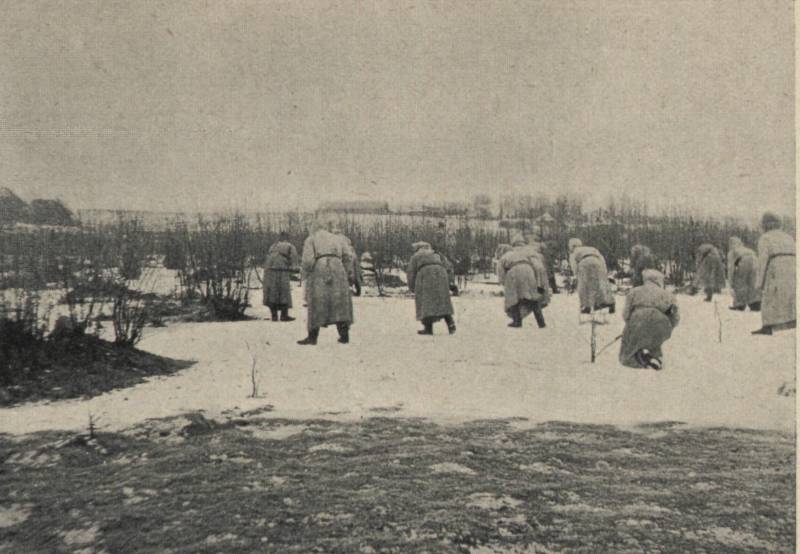