October 11 2017
71
According to the portal breakingdefense.com, at AUSA 2017, held this week in Washington, BAE Systems presented a new modification of the M2 Bradley combat vehicle equipped with an air defense system.


The new “Bradley” has not yet received an official name, so it was presented at the exhibition as M2 Bradley SHORAD (Short-Range Air Defense). At the same time, in BAE Systems, the new combat vehicle is unofficially called the “MiG killer”. 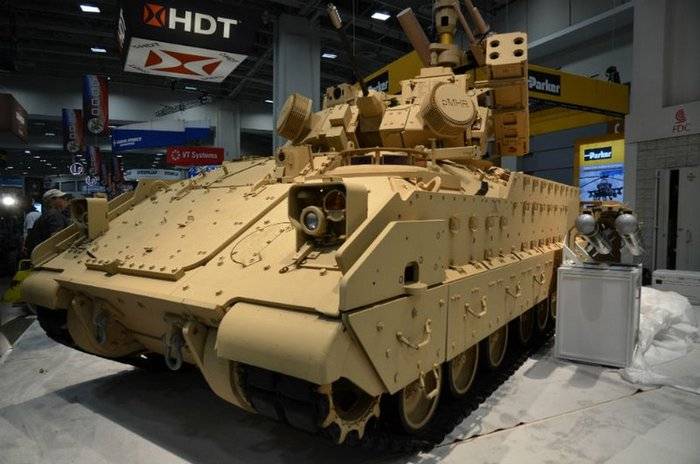 The M2 Bradley air defense system is equipped with three types of weapons at once, providing comprehensive protection against air threats.

For disabling small UAVs, the car is equipped with an electronic jamming system. To hit helicopters and low-flying aircraft designed guided missiles. The third level of protection is the 30-mm cannon, firing air exploded projectiles.

The M2 Bradley infantry fighting vehicle was commissioned by the American army back in 1981 year. According to the 2016 year, the order 10 000 BMD Bradley in various versions, and also created specialized machines based on them, transmits "Warspot".

Ctrl Enter
Noticed a mistake Highlight text and press. Ctrl + Enter
We are
US experienced a new modification of "Stryker"United States presented a new development - Stryker MSL
71 comment
Information
Dear reader, to leave comments on the publication, you must to register.