"In this gangster way 60% of the Pacific Fleet was sold"

October 10 2017
38
History with the hijacking of missile boats in the main base of the Baltic Fleet only at first glance it looks harmless. Yes, the comments of the military are quite convincing, and the boats, most likely, were really just taken away for scrap metal. However, it was thanks to similar schemes that the Russian fleet after the collapse of the USSR was subjected to unprecedented looting. 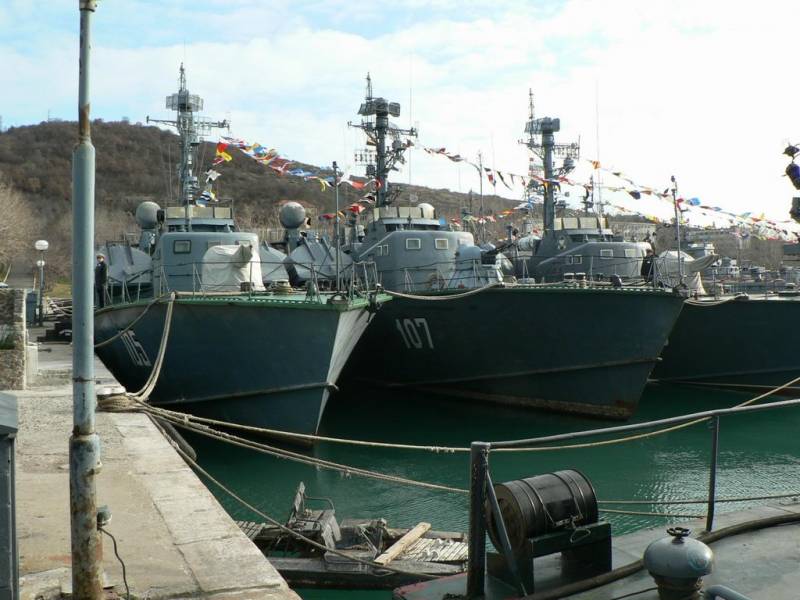 Two combat missile boats disappeared from the harbor water area in the town of Baltiysk (Kaliningrad Region), Mash telegram channel reported on Friday. Later, the sensation was partly dispelled. The boats were written off, and the director of the company, to which the ships were sold by the Ministry of Defense for disposal, informed the police about the disappearance of the ships. “If this could happen, then, most likely, in tow, they dragged somewhere; it is scrap metal ", - declared RIA"News»In the press service of the Western Military District for the Baltic Fleet.

But scrap metal is very expensive. “Such a ship can be“ removed ”from 50 to 80 million rubles, and if the equipment was not removed, then even more. It all depends on the state of the metal, there is a lot of non-ferrous and precious metal on ships, ”remarked Boris Reznik, a member of the Presidium of the National Anti-Corruption Committee, member of the third and fourth convocations. Take, for example, hovercraft, whose hull (weighing several tens of tons) is made of aluminum alloy - from each such ship, according to experts, you can get up to 1 million dollars. Disposal of the boat will bring, of course, less income, but still very profitable.

The extent of disposal can be found in documents published by the Ministry of Defense itself. For example, in 2014, the Ministry posted on the official website a list of property put up for auction - including decommissioned ships and vessels of the Baltic and Northern Fleets. In the list you can find two small anti-submarine ships (one relatively new - built in 1988), a large landing ship built in 1989, as well as two base and three raid minesweepers. Moreover, as noted in June this year, the Internet portal Flot.com, deductible minesweepers remain without replacement due to the lack of replenishment fleet vessels of this type.

"Utilization of glands" is transferred to private owners

In the case of ships "missing" from Baltiysk, this is a question of the former rocket boats of the 205 project, says Captain I rank, First Vice-President of the Academy of Geopolitical Problems Konstantin Sivkov. “They had a displacement of about 205 tons. They were equipped with the P-15M cruise missiles, two 30-mm AK-230 twin guns and the simplest electronic equipment. Commanders of such a ship are lieutenants and senior lieutenants, ”the military expert explained in his commentary to the newspaper VIEW.

Sivkov noted that when it comes to such small waterways, there is a practice of transferring them for utilization to individuals. With the big ships, he says, this is not the case, as private owners simply cannot do it.

“The defense department should hand over in the prescribed manner, not dispose of through commercial structures, and transfer to the Federal Property Management Agency. And already this (structure) should hold contests, and on their basis should already be given for recycling, ”emphasizes Boris Reznik. In the meantime, warships are the subject of commercial disputes and even thefts. This was especially common in the first decade after the collapse of the Soviet Union.

It would be impossible to secretly take out the boat

By itself, the news about the “stealing of the century” from the harbor of Baltiysk rather reminds of a dispute between economic entities, and not the embezzlement of a military unit from the Baltic Fleet. Let us explain - the internal water area of ​​Russia is comparable in its maneuverability with any airport. In order to move an object from point A to point B, you need to go through a lot of approvals, starting with a request from the dispatcher.

These two boats were not on the move. They were led under the tug through the shipping channel. And this can be done only by requesting permission from the operational duty officer of the Baltic naval base and from the civil navigation manager. The “secret crime drama” is becoming a bit naive: in order to steal something, you need to request permission from a large number of instances. Hypothetically towing a non-self-propelled object along the navigable channel is like taking a loader to a landing strip of an airfield without demand. This is a priori impossible, it will be immediately noticed. There are lots of observation points.

So the fact of secret theft of two boats seems doubtful. But the official sale of combat ships under the guise of scrap metal was, alas, a very frequent fact.

Until recently, it was a frantic business with millions of turns, accompanied by gangster clashes. The most paradoxical thing is that in the nineties and zero years, when this business was in full bloom, there were not criminal authorities behind this, but high-ranking military officials.

An example is captain of the first rank Vladimir Minkin from the 11 division of the Baltic Fleet.

He organized on his ships, which is more than 25 units, a system that any criminal authority would envy.

He successfully copied the engines, transferring them from one category to another. After that, the engine went to "fraternal" Poland, and Mr. Minkin received very good gesheft. And the mechanics involved in this scheme received what they needed from the father-commander, for example, improvement of living space or assignment to the academy. The system worked. Minkin was convicted in 2005 year. He was given a ridiculous period of three years, and his two accomplices in general were arbitrary.

When the old ship or the old mechanism is written off, there is nothing terrible in it. But, unfortunately, in those years, enterprising bureaucrats in uniform

On paper, the deliberately new elements of weapons were transferred to an indecent state and pushed to the left, receiving fabulous fees for this.

To date, such large scandals do not arise on the Baltic Fleet, unless we assume that it has become smarter to steal.

“In general, it is still necessary to understand whether it is scrap metal. In this gangster way - “for scrap” - at one time 60% of the Pacific Fleet was sold, ”emphasizes Boris Reznik.

"Routine work" of the cruisers "Minsk" and "Novorossiysk"

One of the most notorious examples of this sad phenomenon was the scandal around the “utilization” of the heavy aircraft-carrying cruisers (TAKR) “Minsk” and “Novorossiysk”, which were decommissioned in 1994, which were in service with the Pacific Fleet. “They were sent to the South Korean port of Pusan, as they say,“ on nails, ”recalls Boris Reznik. - A liquidation statement was approved, in which 11 admirals confirmed that the ships were in the “empty” state. This implied: all equipment and weapons were removed from them and transferred for storage to the warehouses of the Pacific Fleet. ”

The ships had to leave, and the last thing to do was to put a stamp on the customs in Sovetskaya Gavan. “Usually this is a routine matter, no one is watching. But this was helped by the curiosity of a young employee of the Vanino Customs. He decided not to disturb the customs officer. But out of curiosity, the assault ladder climbed to one of the decks (to the height of an 10-storey building, but the guy is a former paratrooper) and saw that everything was cluttered and something was covered with a mat. He threw this mat out and saw that there were aiming systems, volley fire systems, more than 200 units of top secret weapons ... In lubrication, in combat condition and with appropriate documentation, ”says Resnik.

According to the source, the TAKRs were sold to the South Korean side for just 4 million dollars for each ship, like ferrous metal.

“At the same time, the ship had 480 kilometers of red copper pipes, a cable filled with precious metals and a lot of other equipment, the tanks were filled with fuel to the eye - the price was billions,” emphasizes Resnik.

The story, including the efforts of the interlocutor, received a response in the media. “A criminal case was initiated in which the blame was laid on Rear Admiral, who had already died by that time - and the case was terminated due to death. But let me remind you that the admirals of the fleet, Igor Kasatonov (at that time, the Chief of the General Staff of the Navy) and the commander of the Pacific Fleet, Admiral Igor Khmelnov, approved the 11 signatures of the admirals, plus the deal, ”noted Resnik.

Such large ships for sale in the Russian Navy is almost gone. Perhaps that is why news about the sale of only small rocket boats for scrap comes.

Ctrl Enter
Noticed a mistake Highlight text and press. Ctrl + Enter
We are
Intrigues around recyclingList of destroyed the largest and most high-tech enterprises
38 comments
Information
Dear reader, to leave comments on the publication, you must to register.