Khanstman was one of the last to hand over documents to Putin.

Ambassador Extraordinary and Plenipotentiary of the United States of America to the Russian Federation John Mead Huntsman
- announced the announcer.

Then the Russian leader and Huntsman shook hands and turned to the rest of the diplomats. 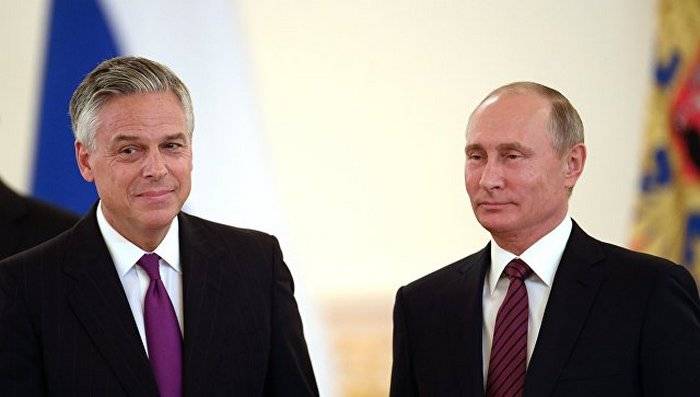 Commenting on the appointment of Huntsman, the Kremlin expressed the hope that he would contribute to the "restoration" of Russia-US relations "from the damage that Washington did to them."

Presidential spokesman Dmitry Peskov recalled that Putin is a "consistent supporter of reanimation" of relations between Russia and the United States. The President believes that improving relations between Moscow and Washington will benefit the whole world, noted Peskov.

Credentials - a document required for accreditation in a foreign country, which is issued to diplomats of the highest level. Upon arrival in the country, the ambassador sends a copy of credentials to the Foreign Ministry and proceeds to work. Official ceremonies for the presentation of credentials to the head of state are usually held every few months. After this, the work of ambassadors and permanent representatives of international organizations acquires full official status, reports RIA News.

Ctrl Enter
Noticed oshЫbku Highlight text and press. Ctrl + Enter
We are
John leaves, John comes. On the change of the American ambassador to the Russian FederationDeputies of the State Duma of the Russian Federation commented on the statement of the American ambassador Tefft about the "occupation of Crimea by Russia"
Military Reviewin Yandex News
Military Reviewin Google News
45 comments
Information
Dear reader, to leave comments on the publication, you must sign in.