Bridge from Russia to Latin America: Trump against

October 2 2017
12
While Mr. Trump prefers to think with walls and dollars, the Russians recall the good old ideas about the friendship of nations. While the White House is trying to force the Mexicans to build a wall on the border at their expense, the Kremlin is pursuing a “best friend” policy. 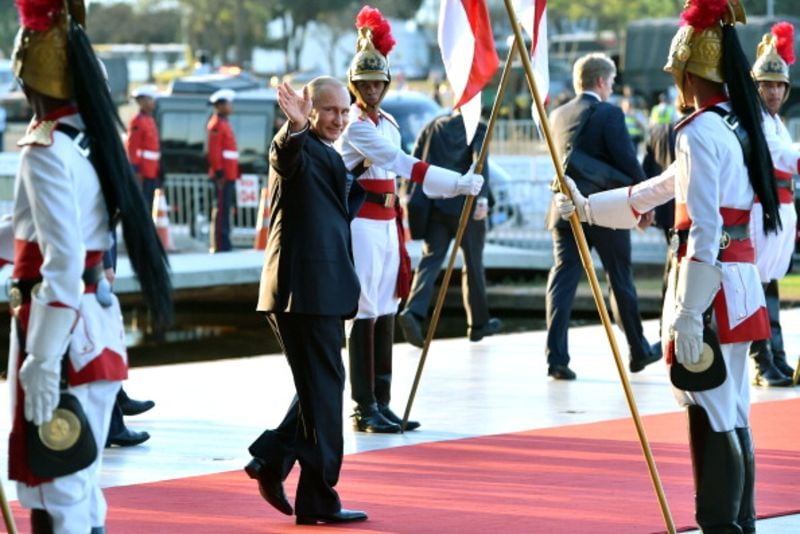 On the rapprochement of Russia with the countries of Latin America told on the website «Bloomberg» Mack Margolis.

Venezuela is not the only country in the continent with which Putin’s ties strengthens, the author believes. And proceeds to the evidence.

To begin with, the analyst shows how American President Trump is destroying relations with Latin American countries.

During the dinner of Donald Trump with the Latin American presidents at the Trump Tower in New York, the conversation was, I believe, very intense. First, Mexico’s President Enrique Peña Nieto rejected Trump’s invitation altogether. There is a good reason for this: Trump sent Mexico a bill on a wall on the border between Mexico and the United States. Juan Manuel Santos from Colombia does not accept the threat of Washington to challenge the status of his country as a good partner in the war against drug traffickers. Pedro Pablo Kuchinsky from Peru, as if summing up all this, called on Trump to build “bridges” rather than walls.

Of course, Trump still has the opportunity to build relationships that his government has so successfully spoiled. And yet, the author believes, when Trump makes attempts to reconcile with his not so distant neighbors, this shows: he has already dropped out of the diplomatic game.

Diplomatic loss is not connected only with the expansion of China, which has been exploiting the resources and markets of the New World for two decades now, which is recognized by the regimes of North and South America as a normal practice.

Today, and a resurgent Russia wants to become the "new best friend" of Latin America, the analyst said.

True, Russian trade and investments in the region make up only a small part of the corresponding investments of China. With the exception of “some memories” of the times of the Cold War, Moscow’s “export soft power” hardly deserves any attention, says Mac Margolis. “The autocratic brand of Vladimir Putin” in most Latin American countries is associated only with “epaulets and aviator glasses”, and the nearest port in the region is located at a distance from half-planets from Moscow!

Well, of course, the Russians never allowed geography to interfere with their fate, the author writes with irony. That is why in recent years a group of countries in Central and South America is moving closer to the Kremlin, and this group is growing. And it's not just about military equipment from Russia. Some Latin American countries have sunk into Russian engineering and energy projects, as well as investment.

Nicaragua (according to rumors) will build a satellite intelligence station using Russian technology.

Finally, Moscow has become a special “creditor” of Venezuela, with which bankruptcy shines in the long run. President Maduro was in such a hurry to make a deal with the Russian oil giant Rosneft that he forced the obedient Supreme Court to cancel the decision of the National Assembly (controlled by the opposition). This body still had veto power over the state budget and state contracts.

Venezuela is currently Rosneft’s largest supplier outside of Russia. The country benefited from the Russian “prepayments”, which helped it cope with current payments on debts.

Not just "comrades" from the left "Bolivarian Alliance" united with Moscow! Rosneft is conducting exploration in both Brazil and Mexico, which are governed by centrist governments. Argentine President Mauricio Macri has recently welcomed the interest of Russian Gazprom to the largest shale gas market in Latin America!

According to the analyst, the new ties between Russia and Latin America may not be so much a repetition of the Cold War times as a “prototype of a new complex world order” in which many rival powers will influence the face of the planet.

If Putin managed to get far away from Russia, then Latin America allowed ambitious Moscow to return to the global arena.

"Russia despised and isolated for the annexation of the Crimea," Margolis writes further, played the "map of the developing world." And got his support!

Characteristically, the majority of Latin American governments, with some exceptions, avoided participating in the isolation of Russia and even intensified bilateral trade after 2014 to help Russia withstand international sanctions. These actions were criticized by experts. Paulo Velasco, senior researcher at the Brazilian Center for International Relations, told the author of the article: "This is contrary to all principles of respect for international law, which Brazil has always adhered to."

An explanation of this behavior can be found in political "sentiments", experts believe. “Russia's fascination with Russia is due to the fact that it resisted the USA for so long,” said Oliver Stenkel, a lecturer in International Relations at the Vargas Foundation (São Paulo). According to the expert, Brazil plays in regional anti-Americanism and assures Russia that “there will be no ideological barriers on the way of its advancement”.

What does Latin America get? “Strategic partnership,” Paulo Velasco answers this question. “This is a multipolar world, and Brazil and its neighbors do not want to be prisoners in the clutches of one major partner.”

And, of course, Moscow is able to appreciate the love of Latin American states and will not make, like the United States, a fuss about “human rights”, “shadow politics” and so on.

This does not mean that doing business with a resurgent Russia will be a pleasant walk along the beach. In a recent survey by Bloomberg Intelligence among the energy and commodity companies listed in the Financial Times Stock Exchange All World index, the highest number of fatalities was recorded at Rosneft.

The problem is that many of the cooperation mechanisms are not transparent, experts say. Details of transactions with Russian business are often hidden from the public.

The article points to the "trick of Venezuela," which, in order to help Syria avoid international sanctions, sent "Syrian oil through Russia to the Caribbean." This is a problem that can turn a convenient partner into an outcast, says Margolis.

Meanwhile, the Latin American “offensive” of Russia continues. And the emphasis is not on crisis Venezuela.

According to Alejandro Sanchez, who leads "InoSMI"For Russia, the priority in the Western Hemisphere is not Venezuela, but Nicaragua.

In September, the chairman of the national assembly, Gustavo Porras, met with State Duma member Sergei Zheleznyak during his visit to Nicaragua. This indicates a warm relationship between states.

In the 2013 year in Nicaragua, opened a Russian training center to them. Zhukov. This step has strengthened the ties of states in the field of defense.

For several years, Russia has been selling Nicaragua weapons. In 2016, the country received fifty T-72 and other heavy military equipment.

Soon, Russia and Nicaragua can hold small military exercises: in April 2017, representatives of the RF Airborne Forces visited Nicaragua to discuss this possibility.

Another example of the development of relations is the monitoring center in Nekhape, part of the GLONASS satellite system. The center was opened in April.

Finally, President Daniel Ortega recently spoke about his government’s relations with Moscow. It was September 1, in celebration of the anniversary of the army of Nicaragua. He said that even in 2006, he had addressed both Moscow and Washington regarding the replacement of obsolete military equipment. He received the answer from Moscow.

“Russia will get an ally and be able to project its influence on the neighboring countries of this region,” the analyst concludes. - Dozens of years ago, Cuba was Russia's closest ally in the Western Hemisphere. Ten years ago, it was Venezuela. Now the most reliable and close friend of Russia in the region, quite possibly, is Nicaragua. ” For Nicaragua, the time has come to become a country "to which Russia has paid attention," he sums up.