26 September 2017
18
The ex-governor of the Odessa region, Mikhail Saakashvili, is actually continuing his election campaign in Ukraine. Independent rating agencies "Square" note that since the moment when President Poroshenko deprived Saakashvili of his Ukrainian citizenship, Misha's rating jumped by about a third. Today, the electoral rating of the former Georgian leader in Ukraine continues to grow and, as political experts note, it can well exceed the level of the current leader (according to the results of sociological polls) - Yulia Tymoshenko.


The reason for the sharp jump in the approval of Saakashvili’s actions in Ukraine is that Mishiko is clearly trying to surpass all political rivals in the sense that almost everyone is told exactly what he wants to hear. In psychology, this move is called “generating trust”. And Saakashvili, like any experienced politician (and he doesn’t have any experience), generates his credibility with words, but not with deeds. The former governor of Odessa does not use disastrous methods a priori: he tries not to talk about what he will do if he is at the top of the Ukrainian government. Instead, he tells the citizens of Ukraine what all the political elites are doing wrong today: the president, the government, the Verkhovna Rada, the courts, the prosecutor's office, etc. How cunning, and so effective. One feels that behind Misha is a whole political technology institute that prepares him for "accomplishments." 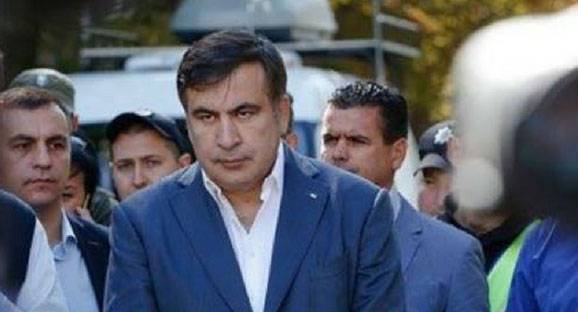 At the same time, neither the president, nor the government, nor the prosecutor’s office could ever decide what to do with the “returnee”. Long thought ... We decided to fine for illegal crossing the state border. And that's all ... And after that, they turned to the usual rhetoric for themselves, reflecting on whose Saakashvili is an “agent”. And here the opinions of those who “do not approve of” Saakashvili’s activities in Ukraine are divided. Some believe that Saakashvili is “the man of Washington”, others are trying their best to prove that he “is acting in the interests of the Kremlin.” And those, and others, as usual, their "irrefutable evidence." At the same time, Saakashvili himself skillfully copes with accusations against himself on both fronts, getting the opportunity to earn the mentioned electoral rating on any scandal.

It is important to note that, being in Ukraine, the attention to Saakashvili’s person from foreign media is growing along with his rating positions. The ex-governor of Odesa region is becoming a welcome newsmaker for British and American newspapers, bringing his “friend" Petr Poroshenko Alekseevich to white heat.

The other day, Saakashvili gave an interview to The Telegraph, which called him "one of the leading politicians in Ukraine." The publication reminded that Saakashvili returned to Ukraine "with the support of thousands of supporters on both sides of the Polish-Ukrainian border." British journalists immediately made it clear to their readers that such support "allows Saakashvili to ensure unimpeded movement around the country, which he calls his second homeland."

An interview with Saakashvili for the British media further added fuel to the fire of a discussion about “whose Saakashvili is an agent.” One of the remarkable statements of the former head of the administration of the Odessa region concerns his predictions about the future of Ukraine. According to Mikhail Saakashvili, Ukraine can continue to crumble into pieces for a number of reasons. The main reason for the possible continuation of the collapse of the “Square” person who gave the order to attack Russian peacekeepers in South Ossetia in August 2008 of the year, considers a ban for the country's regions to conduct trade and economic contacts with the subjects of the Russian Federation.
According to Saakashvili, the regions in the east of Ukraine have no future as part of this state, if they continue to be barred from trading with their neighbor, Russia.

"Returning":
When you go to the east (Ukraine), you see whole cities that no longer trade with Russia, they are in a truly desperate situation. They have no prospects, and they do not see the light at the end of the tunnel. If economic growth remains at the current level, if the situation with corruption is the same, Ukraine will continue to lose territory in the east and south, because people will simply be fed up.

It is noted that, according to IMF estimates, following the results of Ukraine’s 2016, it dropped to the 131 position in terms of GDP per capita. At the same time, the projected economic growth for 2017 year is 2,9%. If growth really takes place, then already from next year to two-thirds of it Ukraine will have to give up in the framework of agreements on loan repayment.

Saakashvili does not say anything about what he is going to do in this situation, but the Ukrainian people, it seems, do not need to say anything. Enough of the classic "revolutionary" set: "We will crush the oligarchs", "We will defeat corruption" and "We will build a European future." Surprisingly, these repeated times from time to time mantras again have a magical effect on the Ukrainian human masses. If they didn’t, then where would Saakashvili’s take on a rapid rating growth - to almost 13%?

On the question that the eastern regions can not trade with Russia. If Saakashvili touched on this topic, then it turns out that, once in power, he will allow the restoration of trade and economic ties with Russia to the east and south-east of Ukraine. At least, declaratively from Saakashvili that way. And in the east of Ukraine exclaimed: “Oh, what a good fellow Misha! Give trade with the Russian Federation! ”But not everyone sees Misha's frank defamation. Before talking about trade, you need to end the civil war in the country. That Mishiko is a man who returned to Ukraine to end the war. It seems unlikely. This is the first. Secondly, the eastern regions of Ukraine would be happy to resume trade with their neighbors, but they already live in the realities of a market economy. The lost market has long been occupied by other players. The same Turkey, once having lost the market of the Russian Federation, still cannot restore the previous export volumes due to the fact that the market was saturated even without Turkish goods. At the same time, Turkey itself is making efforts, and in Ukraine they still cannot decide whether it is possible to have trade and economic contacts with Russia at all or not. Saakashvili proposes to resume contacts, otherwise, he says, collapse completely, but at the same time he himself actually splits what is left of Ukraine.

Saakashvili's message for the further disintegration of the “Square” has been made. And so now, with any further developments, he has his reinforced concrete argument: “Well, I warned you.” But the fact that Ukraine, with its disorder and vacillation in the current borders, is not primarily of interest to those who, in turn, supported Saakashvili in Tbilisi, is hushed up. Why not interesting? Because the United States always ceases to be of interest to the countries that they destroyed, once sowing chaos. And now Russia can and economic recovery (at least, the return of Ukrainian debts) "push" ...

Ctrl Enter
Noticed oshЫbku Highlight text and press. Ctrl + Enter
We are
Pre-election poster artSituational analysis of the death of the MH17 flight (Malaysian Boeing 777), made on the basis of engineering analysis from 15.08.2014
Military Reviewin Yandex News
Military Reviewin Google News
18 comments
Information
Dear reader, to leave comments on the publication, you must to register.