They fought for their homeland 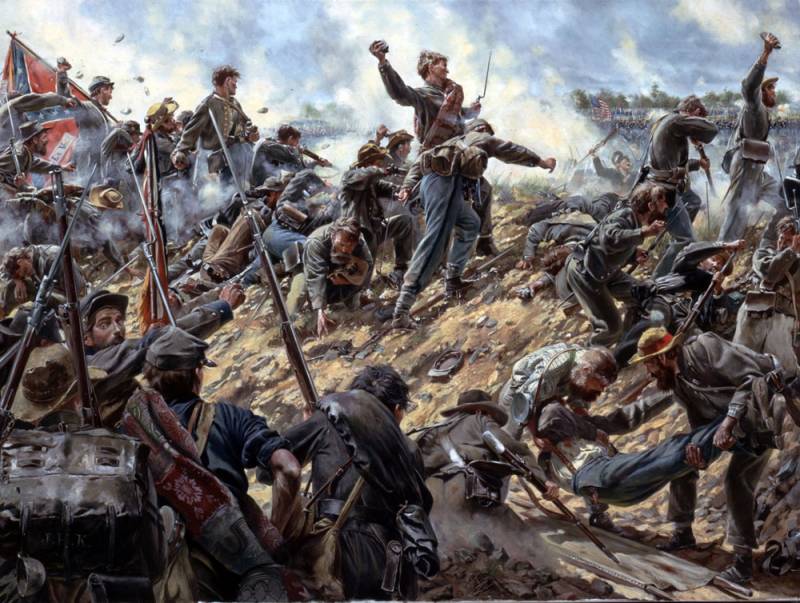 The battle took place in the same place where more than a year ago the northerners made their first invasion attempt and were thrown back. The second time they attacked with much larger forces. General John Pope entered the territory of the separated state of Virginia at the head of 77, thousands of soldiers and officers, of whom thousands of 62 directly participated in the fighting. He was opposed by the army of General Robert Lee, which numbered about 50 thousands of people.

The second battle at the river with the “bullish” name ended the same way as the previous one, but it turned out to be much larger and more bloody. On the morning of August 29, the northerners, under the command of General Siegel, attacked the Confederates, who had settled on the slopes of Stony Ridge Hill, but did not succeed.

At three o'clock in the afternoon Pope sent a brigade of General Grover to attack the hill. She managed to break through the first line of defense and rudely break into the position of the Southerners, but Lee beat Pope in sending reinforcements to the place of the breakthrough. The North Carolian brigade of General Pender arrived in time to plug the hole and drive Grover’s soldiers back from their positions. It was only then that Pope sent Robinson's brigade to Grover’s help, but it was already too late; the Southerners restored their defenses.

Is the same история repeated on the site of the advance of the brigade of General Nagel. She pressed the Confederates, but the reinforcements needed to build on success were overdue, and Lee promptly transferred General Johnson’s fresh brigade from the reserve to the threatened area. Johnson's soldiers with a bayonet counterattack forced the unionists to flee and began the pursuit, but were stopped by artillery fire.

At five o'clock, Stony Ridge attacked the regiments of General Kearny's division, but this attack was repulsed. In the meantime, about the order of Lee, the Confederate general Longstreet made a wide covering maneuver on the right flank and went around the left flank of the northerners, pushing the relatively small forces of generals Schenk and Reynolds there. Pope did not attach any importance to this, deciding that Lee was conducting only demonstrative actions on the flank in order to divert the attention of the enemy and ease his pressure on the main position.

On the morning of August 30, the northerners launched another assault on the Stony Ridge. The main blow struck the corps of General Porter. By that time, the Southerners, who had defended the entire previous day and had already reflected three assaults, had almost completely spent their ammunition. Porter's attack they had to beat off with bayonets and cobblestones, in abundance lying on the slopes of a rocky hill.

But there were a lot of northerners and the situation of the defenders became critical. However, at that moment, Longstreet's artillery fired on the attacking unionists. Inspired by this support, the defenders of the hill rushed to the counterattack, throwing stones at the enemy, and within a few minutes Porter’s surviving soldiers fled.

At four o'clock in the afternoon, realizing that the enemy was exhausted, Lee ordered Longstreet to launch a counterattack. Soon, the southerners managed to crush the left flank of Pope's army and partially go into the rear. Only then did the commander-in-chief of the North understand what mistake he had made, underestimating Longstreet’s maneuver.

The key point of the battle shifted from Stony Ridge to Henry Hill, located in the center of the left flank of the federal positions. On this same hill a year earlier, the outcome of the first Battle of Bull Run was decided, only then southerners defended it, and now northerners. If Longstreet had managed to seize this hill, almost the entire Pope army would have been in the operational bag.

Realizing this, Pope threw all his reserves onto the hill - four infantry brigades. Because of this, the Southerners were not able to seize the height. The attack of three thousand soldiers from the brigades of generals Benning and Anderson was repelled. But at the same time, Lee struck a frontal blow to the enemy positions, located opposite Stony Ridge, and here he was a success. Northerners were thrown back to 500 meters, when they left, they had to throw an artillery battery.

At dusk the battle subsided, and at eight in the evening Pope ordered a general retreat. The Army of the North, like a year ago, went across the Bull Run, blowing up a bridge behind it. In a two-day battle, a Northerner's 1724 died (almost four times more than in the first battle of Bull-Rahn). 8372 man was injured and 5958 - missing. In fact, many of them also died, but their bodies were not found and identified. Many Southerners were simply buried in nameless graves. The Confederates lost 1481 people killed, 7627 - wounded, and all 89 - missing.

On the screen saver - Southerners are defending themselves on Stony Ridge Hill. Painting by American artist Don Trojan. Perhaps soon in the United States, following the destruction of monuments to Dixie warriors, it will be forbidden to display such paintings, glorifying these intolerant racists. 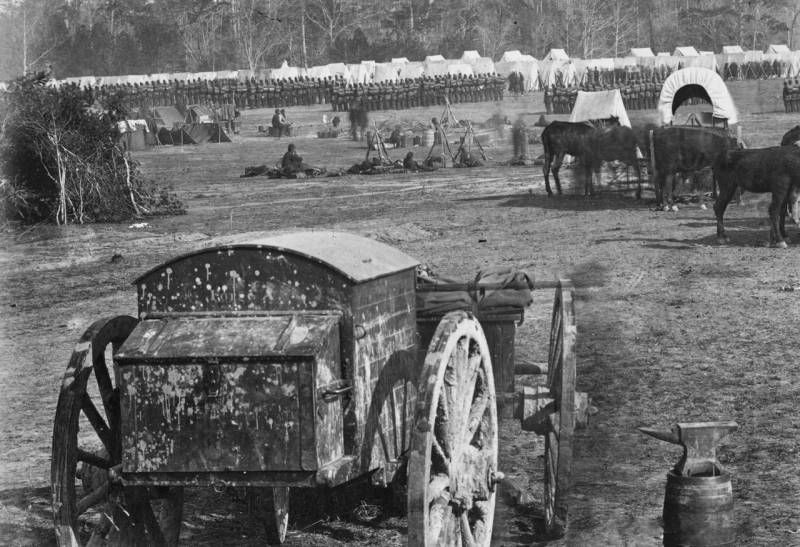 One of the campgrounds of the Northerner's Army in Virginia. 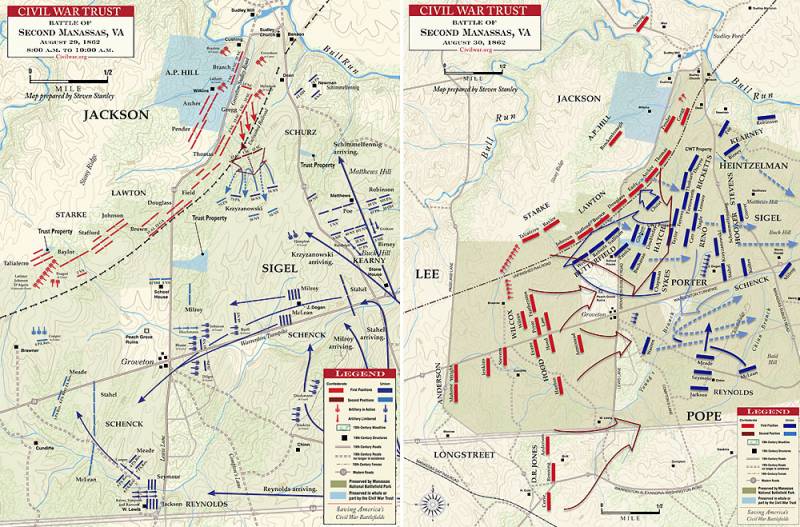 Schemes of the "second Bull Rana" as of the morning of August 29 and on the afternoon of August 30 of the year 1862. Northerners are marked in blue, southerners in red. 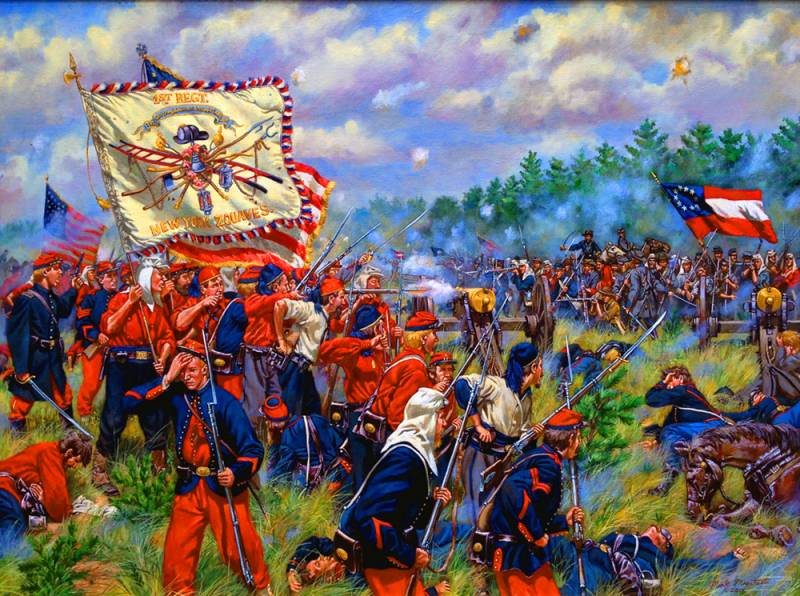 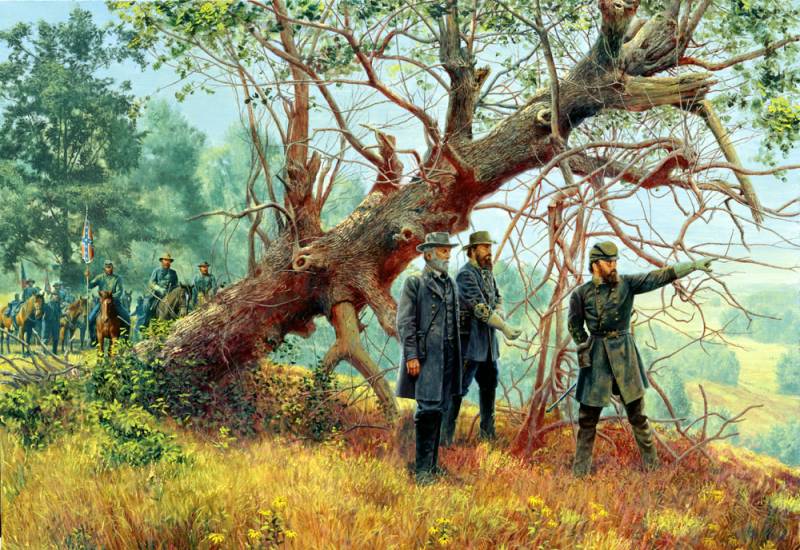 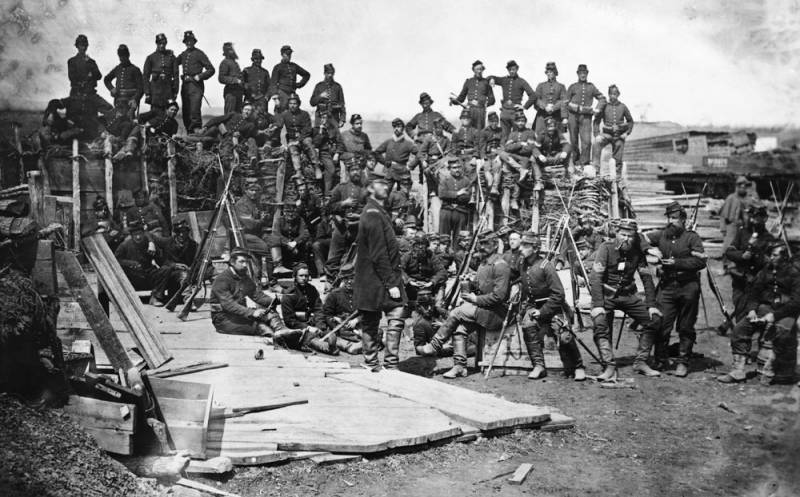 Second Battle of Bull Run, drawing from Harpers Weekly for 1862 year. In the foreground - northerners. 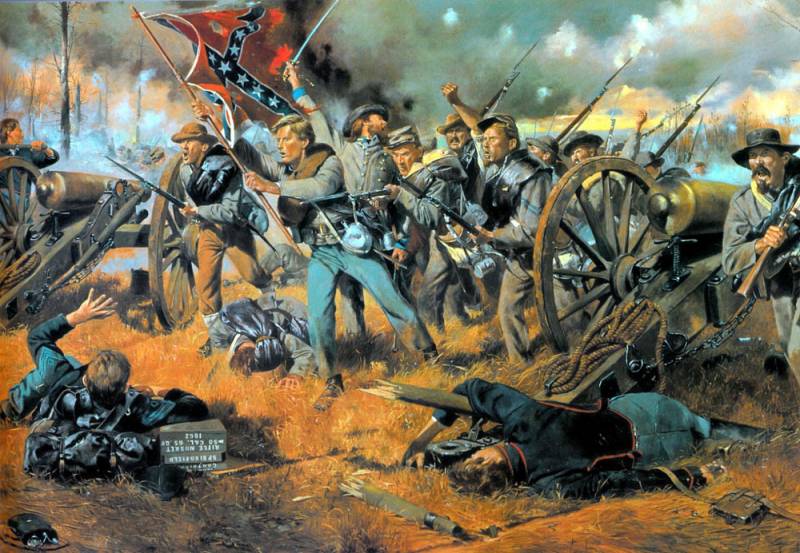 The confederates in the 30 August evening 1862 counterattack seized guns. 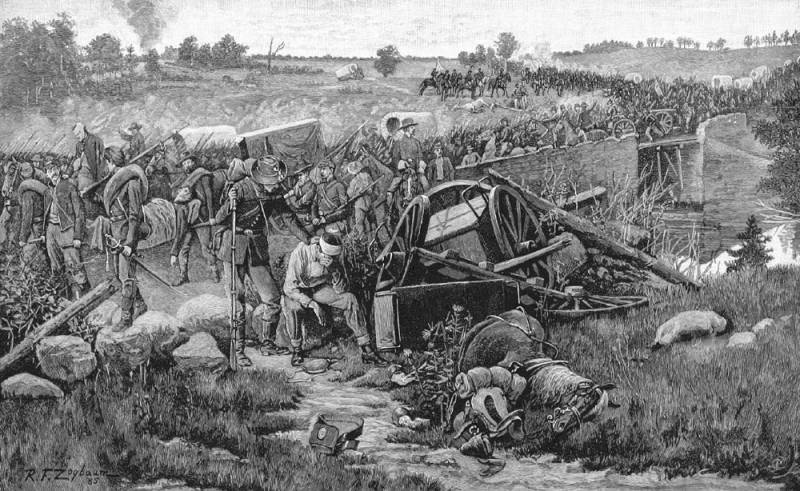 The retreat of Pope's army through Bull Run. 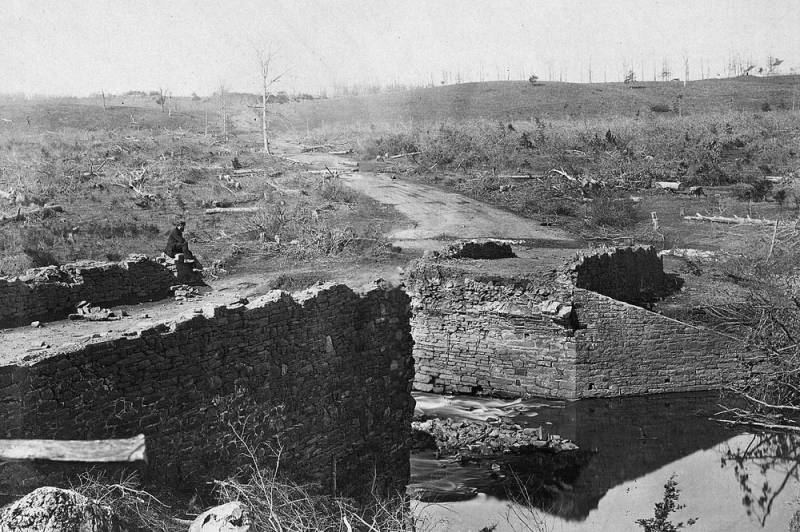 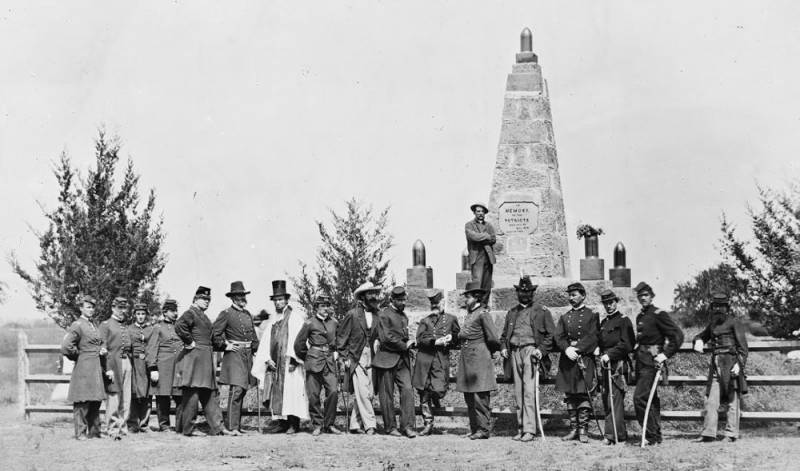 Opening of the monument on Henry Hill in September 1865, shortly after the end of the war of the North and the South. Interestingly, the tablet says only “In memory of the patriots” and shows the dates of two battles that took place at this place at intervals of 13 months. 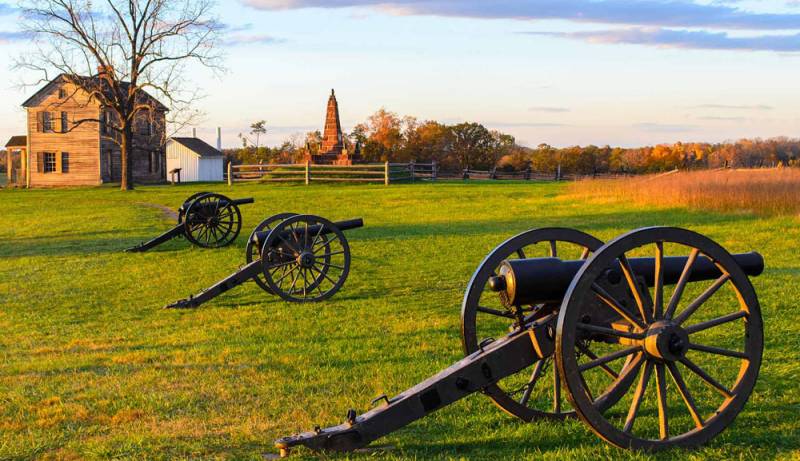 The modern look of the memorial, supplemented by several X-NUMX-pound Perrot field guns, used by northerners in the second Bull-Ran battle.