4 September 2017
25
By the Day of Solidarity in the Fight against Terrorism (in the Russian Federation), an American petition to the US President about the need to consider recognizing financier George Soros as a terrorist gained more than 100 thousands of votes. This fact, according to American laws, dictates to the US authorities the need to conduct a review of the initiative voiced in regard to Soros. 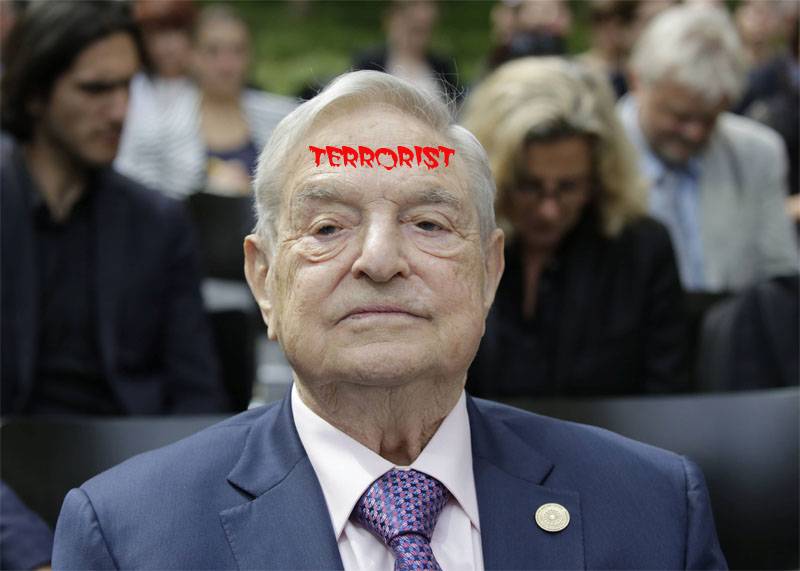 Recall that the authors of the petition are demanding that the administration of the US President add Soros to the list of terrorists, which would automatically freeze his multi-billion dollar accounts. And if you believe the statistics of Forbes, then 87-year-old Soros has these billions (dollars, of course) - no less than 24. In the worldwide list of billionaires financier and “investor” of Hungarian origin by name (at birth) Györz Schwartz is on the 29 place. And the fact that the richest people in the world are in the top thirty allows a person not only to live in such a way that “there is enough bread and butter” ... Not simply, but also ... And this “but” is just the same for many people. Soros is too active and in his far from youthful age he “invests” there where frank politics clearly prevail over the economy. Moreover, a policy of such a nature, which aims to create a favorable business environment for George Soros, which allows creating loyal institutions and public organizations, is a large-scale lobby all over the world.

The oddity is that Soros has been shitting for a long time and actively almost everywhere, where his hand reaches, actively sponsoring the sowing of chaos by radical organizations in various countries, and an angry petition in his address has appeared only now. Did the United States have previously been satisfied with everything in the activities of the old Georgie, but now suddenly ceased to arrange? .

Here's your time ... Against dozens of countries around the world, including Russia, they knew, but so that against the US ...

One of the probable reasons for the appearance of such a petition may be related to the kind of activity George Soros has shown in recent months. Billionaire was one of the most ardent critics of US President Donald Trump. That is one billionaire criticizes another billionaire. In this criticism itself, envy, and resentment, and anger are concluded. After all, the billionaire Trump turned out to be the president of "the most exclusive country in the world", and Soros did not reach this level for his 87. Regimes in other countries taxied - no doubt. But at home to dictate their own political will somehow did not work. So he announced that Trump "will destroy America", and stuff like that ... Senile envy? - Completely. Bruised billionaire self-esteem is also quite.

For obvious reasons, Trump did not like criticism from a financial competitor. And then suddenly (“out of nowhere”) an anti-Soros petition appears. Will it really be someone in the camp of the American authorities considered in favor of recognizing George Soros as a terrorist is a big question, but even this is not the main thing. The main thing is that Soros, through this petition, has already demonstrated that his activity on “the call of the people’s will” can be quickly curtailed. And not just collapsed, but also with the freezing of all his 24s with over billions of dollars of assets, which can turn from the assets of Mr. Soros personally into the assets of the “American nation”. In general, everything is based on the principle of “Let's make America great again”.

And indeed ... In other cases, Trump needs to fly to the Saudis, call up with the Japanese and South Koreans, carry Melania with Ivanka and the rest of the family in order to squander / sniff / shove (modern lit. Americanism - “lobby”) selling American weapons under the pretext of a threat even from Assad, even from Kim, even from Putin, and even altogether from alien invaders. And what about the Soros? To replenish the treasury with billions, it is not necessary to fly anywhere, Melanie heels also do not have to tread down. Almost a quarter of a hundred billion dollars is at stake. On the scale of the USA - a drop in the ocean, but Trump even during the election race stated that he would fight for every dollar and for every job for the USA. And he declaratively can translate these 24 more than a billion with a stroke of a pen into the American budget. This time. And also: to get rid of a political critic is two, to teach a lesson to the rest of the “disloyal” billionaires — three. Yes, even if Soros will not “feel”, then, as it is now fashionable to say, the “message” has already been sent to him: old man, do not think that we do not know how to make sure that you break up with your money and with your views on the American political modernity.

In Russian political circles, they actively comment on the anti-Soros petition. So, representing the upper house of the Russian parliament, Alexei Pushkov, notes that Soros “played out”. Here are Pushkov's tweets:
Soros finished playing politavantyury and color revolutions: a wave against him went to the United States itself. The final blow to the remnants of his supporters in Russia.

The petition against Soros is also a protest against the policies of the Obama government, which uncontrolledly allocated money to Soros for political manipulations abroad.

Another Russian senator, Franz Klintsevich, believes that recognizing Soros as a terrorist would mean undermining the foundations of the United States.

Really. If the billionaire Soros is declared a terrorist, then 99% of all American “money bags” will have to be declared a terrorist. Therefore, no recognition is expected, of course. But, as already noted, it is important the message itself, which 87-year-old Soros sent by the fact of the appearance of the petition.

That is, Soros is in a "fork" situation. If you continue to criticize Trump too actively, they can even “punish” them with quite tough methods. And if you do not continue, it means - to accept and live quietly in the format of an American billionaire retiree, sniff flowers and swing in a chair on the lawn ... Soros does not agree a priori.

In this regard, it is worthwhile to assume that Soros may well begin the undercover game (as he can do very well). The game to form the anti-Ram coalition from the same "money bags" (in fact, the American oligarchy), who are also not happy with the fact that Trump has "400 relatively fair ways" to take away their assets.