1 September 2017
42
The American company Bell Helicopter has begun to test its new convertiplane. Theaviationist.com portal published a snapshot of the first prototype of the V-280 Valor convertiplane during ground testing at the Bell Helicopter plant in Amarillo, Texas. Material submitted "Warspot"


During the first phase of testing, developers test the performance of all V-280 Valor systems on the ground. After that, the second stage starts - taking off the ground (taking off to a small height with fixing with special cables to avoid uncontrolled demolition). These two stages must be completed within a month, after which the tiltrotor will proceed to the passage of full-fledged flight tests. 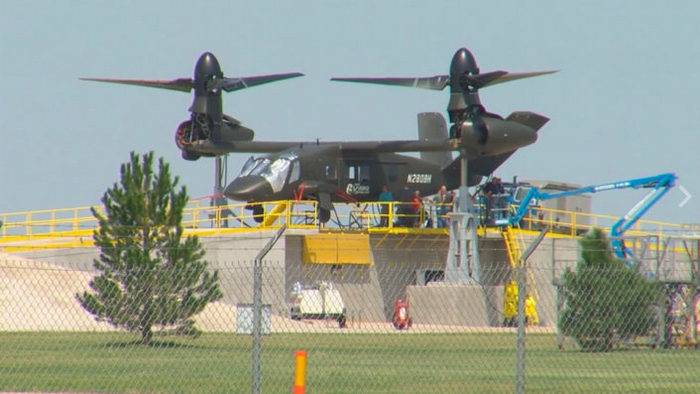 Unlike the first production model of the convertible Bell Bell Helicopter (V-22 Osprey), the V-280 Valor does not have a removable swivel wing (this will reduce the overall weight of the vehicle), as well as a rotary engine - when performing maneuvers, the rotor changes only clearly seen in the picture above).

Another innovation applied in the V-280 Valor is a fully composite fuselage. According to the developers, this will make the new machines easier and more durable. According to preliminary calculations, the new convertiplane will be able to reach speeds in 518 km / h, the combat radius of the flight will be 1 500 km, the fermentation range - 3 900 km. In this case, the crew of the car will consist of two people, and even 12 fighters in full gear can fit in the passenger compartment.

Convertible V-280 Valor (English - "valor") are developing the company Bell Helicopter and Lockheed Martin. According to the creators, they are already ready to begin production of new aircraft, although according to the plans of the American military, the V-280 converters should be commissioned by the US military only by the year 2030.

We are in Yandex Zen
Ground tests of the American V-280 Valor convertible began
Bell introduced the project of the third generation convertoplan - V-280 Valor
42 comments
Information
Dear reader, to leave comments on the publication, you must to register.