1 September 2017
85
Today in Russia is celebrated a holiday that concerns literally each of us. Some learn, others learn, others do both, the fourth send children or grandchildren to study. The whole country celebrates the Day of Knowledge - a day that is not the red date of the calendar, but this does not prevent it from being one of the most important holidays of the country.


Statistics show that due to certain demographic changes, the number of schoolchildren has increased this year. About 15,5 million students will sit at school desks. This is about 900 thousand more than September 1 2016 of the year. On 100, thousands of children have become more first-graders today - 1,8 million in 2017, unlike 1,7 million in the past year. 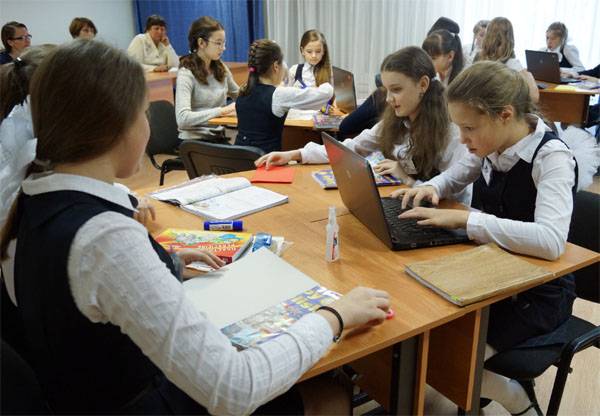 In total, more than 94 thousands of educational institutions will open the doors for schoolchildren and students, of which 42 thousands are schools. The total number of pupils, students, cadets and persons undergoing retraining on 1 this September will be 30 million people! This is every five citizens of the country.

Today, in the regions of the country, 76 has launched new schools. More 18 schools will begin their educational and educational activities until the end of 2017 year. In total, approximately 105 thousands of children will be able to study there.

Speaking at a meeting on readiness for a new academic year, Olga Vasilyeva, Minister of Education and Science of the Russian Federation, noted that a record number of specialized educational institutions opened on September 1. In total, 11 thousands of objects, including new objects in the Tambov and Leningrad regions, as well as in the Khabarovsk Territory. The All-Russian project “Affordable Further Education for Children” continues to operate.

Olga Vasilieva quotes Press Service of the Ministry of Education and Science:
Within the framework of the priority project “Affordable Additional Education for Children”, new directions were opened - natural science, technical. Opened 40 Kvantoriumov. We have covered 15 percent of children this year additionally, only in Kvantoriums 28 thousands of children are engaged.

“Kvantoriums” are children's technoparks that are part of the resource and methodological center for additional education in the Russian Federation. The mission of Kvantorium is officially defined as follows: assistance to accelerated technical development of children and the realization of the scientific and technical potential of the Russian youth, the introduction of effective education models that are available for replication in all regions of the country.

To date, more than 30 thousands of children are involved in children's technology parks in more than 100 regions of the country, manifesting their tendency towards natural science disciplines. The activity of “Kvantorium” is divided into sections related to a particular science or its applied application. So, for example, in the section “Laserquantum” students learn the practical applications of laser technology, Geoquantum studies the geographical features of certain parts of the world, as well as areas of activity such as global positioning, mapping of satellite data. In general, the scheme of work of “Quantoriums” in cooperation with various partners, including the system of secondary and higher education, as well as the R & D system and entrepreneurship, is presented on the project website as follows: 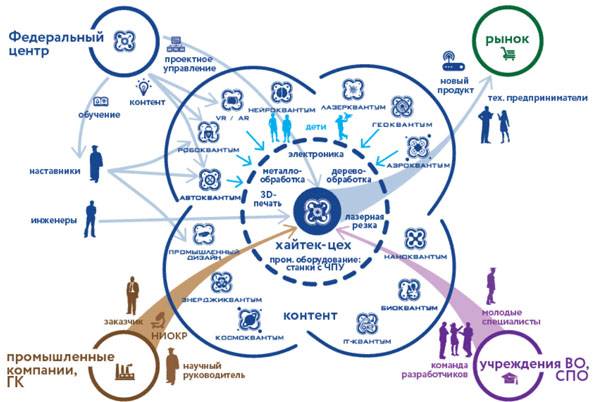 From the video about the options for the work of “Kvantoriumov”, which is designed for modern youth:

Returning to the data presented by Olga Vasilyeva, one cannot but touch upon the information about the wages of the pedagogical community of the Russian Federation. If you believe the head of the Ministry of Education and Science, the salaries of Russian teachers have grown throughout the country. Here are the data from the minister, judge for yourself:
In preschool education, the salary level rose by 5% and is 29 300 rubles (in 2016 year - 27 900 rubles). Teachers ’salaries are 33 200 rubles (in 2016, 32 000 rubles). As for additional education, the salary has also increased - by 8,95% over the same period and now stands at 32 900 rubles, and in the first half of the year - 85,9% of the established indicator 95%. We are moving well in this direction. It was possible to achieve good targets for the average monthly salary of teachers and masters of vocational training of secondary vocational education: in this sector, salary is 35 thousand 400 rubles (in 2016 year - 33 thousand rubles).

The minister said that in the 59 regions of the country, the agency notes an influx of young professionals. At the same time, the percentage of young teachers in the region as a whole is at around 5-7%.

Olga Vasilyeva also touched upon the provision of schools with textbooks. According to her, on 1 September, 30 million new textbooks were purchased with funds from the federal budget, and the general library fund of educational institutions amounts to more than 195 million educational materials from the federal list.

On 1 September, 1764 correctional schools operate in Russia, of which 360 received the latest medical and medical diagnostic equipment. In order to provide work according to the plans and programs of educational institutions of a correctional type, specialists of a narrow profile are trained - defectologist teachers, children's psychologists and psychotherapists. The so-called mediation directions of work in educational organizations are opening.

From the congratulations on the Day of Knowledge, voiced by the Minister of Education and Science:
I want to say a big thank you to those who, by vocation and call of the heart of 1 September, will enter the classes! I want to wish them health, happiness to their families, so that this year will be a wonderful one for us, the children will delight us. And I think we will succeed!

To such congratulations and such wishes is a sin not to join! How I would like to wish the ministry and the high-quality tracking of the reality of the statistics that comes “from the field”.

Photos used:
Department of Education of the Voronezh Region