3 September 2017
34
In 1945, the Allied Powers decided to occupy Japan. A plan was developed for its division between the victor countries in the image of Germany. The entire island of Hokkaido and the northern part of Honshu were transferred to the USSR. The death of Franklin Roosevelt, the rise to confrontation of Harry Truman, crossed out this project.


In 1945, the Allied Powers decided to occupy Japan. A plan was developed for its division between the victor countries in the image of Germany. The entire island of Hokkaido and the northern part of Honshu were transferred to the USSR. The death of Franklin Roosevelt, the rise to confrontation of Harry Truman, crossed out this project.

Objectively, the entry of the USSR into the war against Japan was beneficial to the United States, England, and China. Of course, the Soviet Union had its own reasons and pursued its own vital interests, the main ones recognizing the elimination of a large strategic grouping of a hostile state near the Far Eastern borders, which had been preparing for an attack on the USSR for many years, and then forcing Japan to peace. The geopolitical task was to consolidate South-Sakhalin and the Kuril Islands under the jurisdiction of the USSR in accordance with the Potsdam and Yalta accords adopted by the leaders of the anti-Hitler coalition countries.

The entry of the USSR into the war against Japan undoubtedly created the preconditions for the extensive use of Soviet forces for the subsequent occupation of part of its territory. However, as subsequent events showed, the American politicians and military were concerned that in this case the Soviet Union would receive greater rights in the administration of the defeated country.

In accordance with the geostrategic and geopolitical interests, the Soviet General Staff developed a plan for the Manchurian offensive, the South Sakhalin offensive and Kuril landing operations, as well as the landing of a large contingent of troops in Hokkaido, "if Japan continues its further struggle after the defeat in Manchuria and Korea." The last operation was to start from South Sakhalin immediately after its release.

The Soviet command successfully carried out this entire plan with the exception of the last point - the landing of the Soviet divisions in Hokkaido. Preparation was carried out, but the landing did not take place.

As is known, the Soviet forces, which were carrying out the task of liberating southern Sakhalin and the Kuriles, were opposed by the troops of the 5 of the Japanese front with headquarters in Hokkaido. Therefore, it was logical to decide the General Staff on the results of hostilities in this operational direction to accept the terms of surrender from the front command (as the direct executor of the will of the emperor) at the location of the headquarters. This did not disagree with the American plan for the dismemberment of Japan into the occupation zones by the Allied forces, in which the USSR assigned the entire territory of Hokkaido and even part of the largest Japanese island of Honshu. 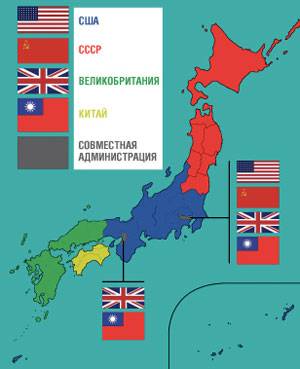 Moreover, in a telegram addressed to Stalin on 18 August 1945, Truman reported that he and General MacArthur, the Supreme Commander of the Allied Forces in the Pacific, had determined the order of occupation of Japan, and during the preparation and signing of the Surrender Act "symbolic allied armed forces would be used forces. " Apparently, on the basis of this circumstance, Stalin established himself in the operation, assuming that the two rifle divisions intended for disembarkation would become these "symbolic" forces in comparison with the two American armies occupying Japan. At that time, the Soviet leader still trusted the US president to some extent and hoped for his decency. However, relations between the two countries at the suggestion of Truman and his administration took a completely different turn.

Another 15 of August for the information of the leaders of the states involved in the defeat of Japan, was sent a draft general order No. 1 of General MacArthur on the procedure for accepting and carrying out the surrender of the Japanese armed forces. This document “forgot” to indicate that the Japanese garrisons in the Kuril Islands should surrender to the Soviet troops.

In a reply from 16 in August, Stalin reminded Truman of this and restraintly but firmly suggested “including the northern half of Hokkaido island to the Japanese command area, and the demarcation line between the northern and southern half of Hokkaido island (and not Some historians consider. - AI) to follow the line going from Kushiro to Rumoë ... ”The letter clearly indicated the purpose of the landing of the Soviet divisions: to accept the surrender of Japanese troops in the northern part of Hokkaido as idents completion SAKhALINSKAJa Kurile liberation operation.

But in the aforementioned answer of Truman from 18 in August this proposal was rejected, the Soviet troops in the reception zone of the surrender in Hokkaido were denied. At the same time, the letter contained a request (!) Of the American president to provide an airbase in the central part of the Kuril ridge (apparently, it meant an airfield on Iturup), the appearance of which negated the entire defense of the USSR in the Far East.
Truman’s answer is essentially rudeness, but for the American side, given the Anglo-Saxon mentality, it’s quite natural.

The trump card in the post-war game of the former American allies was the atomic bomb tested in Japanese cities. In this regard, their views on the post-war structure in the country of the defeated enemy changed. Truman and his headquarters decided to turn Japan into a stronghold of the struggle against communism in the northwestern Pacific Ocean, primarily with the USSR and China. Therefore, it was decided to "make the occupation of Japan a purely American enterprise" and not allow the armed forces of other states participating in the war to enter the islands. The American Committee of Chiefs of Staff appreciated the strategic importance of Hokkaido, which was that if it was occupied by Soviet troops, the vast Sea of ​​Japan would turn into the internal waters of the USSR, and in the Pacific fleet a convenient southern bridgehead would have appeared. American generals did not want to give up this territory just like that.

We don't need this Hokkaido

Having been refused by the President of the United States, Stalin correctly assessed the actions of the Allies and, after weighing all the pros and cons, decided to cancel the planned landing of the Soviet divisions in Hokkaido.

Even now, after many years after those events, the difficult psychological state in which the Supreme Commander was in, and the reasons that forced him to take such a step, despite the wounded pride of the leader of the power that broke the back of Hitler's Germany, and just on the battlefields of Manchuria, on Sakhalin and the Kuril Islands, which once again demonstrated its military power and loyalty to the allied duty. The motives that prompted the final decision could be the following:
in spite of everything, remain faithful to the letter and spirit of the Potsdam and Yalta agreements, which, according to Stalin’s deep conviction, could not have been an alternative in the post-war world and which did not provide for Soviet control over Hokkaido. He understood that violating these agreements would put at risk the acquisitions of the USSR in the Far East, including the southern part of Sakhalin and the Kuril ridge (this became evident from Truman’s quoted letter of August 15);
Stalin wanted Soviet-American cooperation to take place on the terms of respect for both sides to each other’s reasonable demands. This concerned the issue of our presence in Hokkaido. That is why the zone of capitulation by the Soviet troops was proposed on this Japanese island. In this case, the Supreme was guided by the consideration that the Americans won the war in the Pacific, but the USSR won a victory in Europe. If Moscow was able to come to terms with the presence of Americans in Germany, why would Washington refuse to tolerate the Soviet contingent in Japan?

On the other hand, the main geopolitical goal of the USSR when entering the war against Japan was to force it to peace, which happened with the surrender of Tokyo. And with the breakdown of the Japanese resistance in the Sakhalin-Kuril operational direction, the military need for the landing of Soviet troops in the metropolis has disappeared.

Strictly speaking, by adopting such a decision, the Supreme in no way violated the plans of the Soviet General Staff. Then, in 1945, Stalin still perceived Truman as a partner in managing the post-war world. But he changed his mind pretty quickly. Truman, for his part, mistakenly accepted the refusal to land on Hokkaido as a sign of political weakness and even cowardice. History showed that both leaders of superpowers were mistaken in each other's assessments.

The refusal of the landing of the Soviet divisions in Hokkaido was a major concession to Stalin, and he did not go for it because of Hiroshima, as it seemed to world public opinion. Our leader at the time did not believe in a nuclear apocalypse, stating that the outcome of wars was decided not by atomic bombs, but by the army. The main or even the only goal was to preserve the partnership with the United States that was destroyed in front of our eyes, obtained in battle.

It is appropriate to mention the myth that Stalin had the idea of ​​creating a Soviet satellite in Hokkaido - a people's democratic republic like North Korea. Let us turn to the expert, Doctor of Historical Sciences Anatoly Koshkin: “For the creation of the pro-Soviet regime on the backward, which did not have industry on Hokkaido Island, Moscow had neither the means, nor the experience, nor the necessary personnel ... Besides, there are no documents in the archives of various departments Japanese People's Democratic Republic ".
Another myth about the failed operation is that the Soviet troops from the landing on Hokkaido allegedly restrained the fear of serious resistance of the Japanese on their own territory. It is worth recalling that the Kuril Islands, like the southern part of Sakhalin, were considered by the Japanese population and army to be their territory from the 19th century (the Kuril Islands) and from 1905 (South Sakhalin). However, the resistance here was broken in the shortest possible time. An unprecedented incident occurred in the Kuriles when, in front of two companies, marines from the detachment of the first rank captain Leonov capitulated the garrison of Paramushir island with 13 500 soldiers and officers.
Stalin, seeing the dishonesty of the Anglo-Saxons, bordering on meanness towards the USSR, most likely regretted his concession. This is evidenced by such a fact. In 1947, Admiral Yumashev, commander in chief of the Navy of the USSR, the author of the landing plan for Hokkaido, raised the topic of canceling the operation in a conversation with Stalin and recalled that at that moment he wanted to bypass the headquarters and insist on landing troops, bypassing the commander in chief of the Armed Forces in the Far East but did not. “In vain,” the Supreme Commander replied, “if it did, they would be awarded.” If it didn't work out, they would punish me. ”

In any case, the reasons why the Soviet leadership and Stalin personally did not launch the Soviet divisions in Hokkaido, not military, but political, and they appeared at the very top - in the offices of the Kremlin and the White House as the beginning of the Cold War between the two former allies.