August 4 2017
120
Foreign analysts are seriously considering the possibility of Navalny winning the presidential election in Russia. And this is despite the fact that the rating of a well-known fighter against corruption does not now reach two percent (survey data). 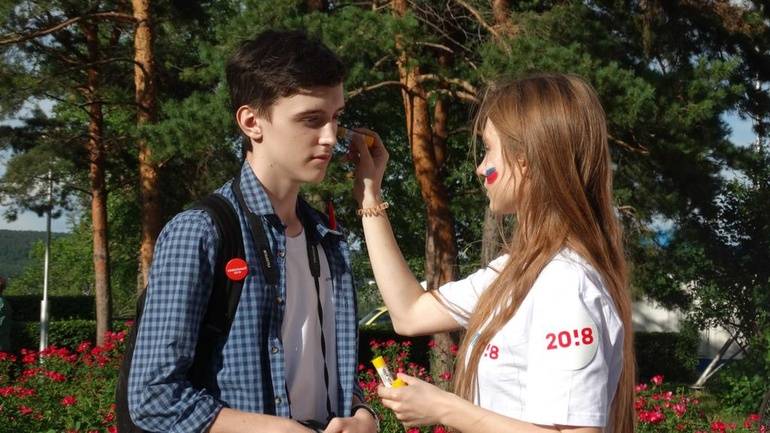 Young supporters A. Navalny. Photos from the site "Bulk 2018"

Mark Bennett is a Moscow-based journalist, journalist, author of a book about Putin and the opposition. He believes that Navalny may defeat Putin. The topic of Navalny, his associate Volkov and the future of Russia is dedicated to the great material of Mark Bennett in the journal "Politico".

According to Leonid Volkov, the head of the election headquarters of Alexei Navalny, the constant pressure from the Kremlin is a sign that his candidate is on the right track. Volkov, this well-known Kremlin critic, hopes that Russian President Vladimir Putin will give way to Navalny in the elections. It was Volkov, according to Bennett, who was behind Navalny’s political campaign in the regions, the country of which had not yet seen.

Navalny's sensational statements about corruption at the highest level are in the center of attention of the international community. But Navalny owes his current political ascent to the organizational efforts of Volkov, who gave the 41-year-old lawyer, who received his education at Yale University, political weight in regions far from the capital, in different cities and villages, where influence is necessary to try to weaken the power of Putin, who controls the country nearly two decades.

However, Volkov's efforts will be merit only if the name of Navalny will appear on the ballot papers.

Volkov, a bearded 36-year-old former IT specialist, answered Politico questions at Navalny’s headquarters in the eastern part of Moscow.

Here is the thesis of Leonid Volkov: “We are imposing a black and white picture of the world on people. Are you for Putin or for Navalny? ”

Despite the ongoing pressure from the authorities, Volkov managed to organize mass campaigns "Bulk 2018" throughout Russia, from Vladivostok to St. Petersburg. The election campaign, according to Volkov, is fully funded by Russian citizens in private (donations). 98 million rubles was collected via the Internet. More than 120.000 people from all over the country have participated in this. Many of them are teenagers, many are about twenty years old.

Over the past few months, tens of thousands of protesters against the government twice took to the streets in dozens of cities. Thus, the opposition movement in Russia received a new life, the correspondent believes. As the author notes, after the “pro-Putin euphoria that swept Russia after the seizure of the Crimea in the 2014 year,” nothing like this happened.

The election campaign "Bulk 2018" is a contrast to the inactive campaign, to which Putin is traditionally inclined. The same can be said about the pre-election efforts of “a handful of Kremlin-approved candidates who have been allowed to resist him for many years.” Since coming to power in 2000, the author recalls, Putin "did not take part in election debates, on television or otherwise."

The Kremlin is not happy about the violation of Navalny unwritten rules. In addition to Volkov, who was arrested twice in recent months, more than a dozen team members were detained, including Navalny himself. The charges related to unauthorized protests. Putin’s security officials raided Navalny’s offices across the country, confiscating computers and other valuable equipment. Other people associated with the campaign were beaten with baseball bats and stabbed with knives. In April, Navalny himself suffered a serious eye injury as a result of an attack by a pro-Kremlin activist in Moscow, Bennett points out.

The head of the CEC of the Russian Federation said recently that in March of next year, Navalny could hardly be admitted as a candidate for the elections, since there was an accusation of fraud. "The election commission, controlled by the Russian government, intends to make a final decision on the candidacy of Navalny in December," reports Politico.

For Volkov, the Kremlin’s rage is clear evidence that his team is on the right track. And he "obviously likes to create a headache with the shadow advisers to the president." Putin has yet to officially declare that he will strive for re-election, but there is little doubt in the country that he is already preparing for the fourth term, which will allow him to retain power until 2024 of the year.

“The goal of our campaign is to create an atmosphere in which it is politically less advantageous for the authorities not to register Navalny as a candidate in elections than to register,” Volkov says.

“If everyone in the country starts thinking that the only reason why Navalny is not included in the bulletin is Putin’s fear of him, then they [the authorities] will have no choice but to allow him to come forward,” Volkov explains.

As for the version that Navalny’s candidacy may be beneficial to Putin, Volkov is not ready to consider this possibility. “I have a plan, and we are working on it,” he says. “And for us, things are going well.”

When Volkov was a teenager, he lived in Yekaterinburg, the fourth largest city in Russia. He was a computer wunderkind and represented his hometown in national and international programming contests. It was a direct path to the world of IT. About 10 years he worked in one of the largest software companies in Russia, SKB "Kontur", rising to a management position. Past leadership experience, he notes, is well helping him now. He first met with Navalny in 2010 on the opposition forum. About six months later, Navalny accepted an invitation from Volkov to visit Yekaterinburg, where the first seeds were sown, on which the Bulk 2018 campaign then sprang up. “He flew in, held eight meetings with local businessmen, activists and journalists and talked very convincingly to each of them,” Volkov recalls. “I remember thinking:“ This is my presidential candidate. ”

That visit Navalny was also the beginning of a close friendship between the two men.

The current campaign is not Volkov’s first attempt to promote Navalny. In 2013, he led the campaign of Navalny, a candidate for mayor of Moscow. Sergey Sobyanin, “appointed by Putin”, was against him. Sobyanin behaved traditionally: having Putin behind his back, he “refused to debate with rival candidates and even meet publicly with voters.” And Volkov organized the Western-style Navalny campaign. Navalny spoke up to three times a day and went down the subway himself to distribute propaganda materials.

Difficult work paid off, say the opposition. Navalny, who for some weeks before the election was some three percent, won the hearts of almost 30 percent of voters and took second place.

As reported later in the material, today, as in the 2013 year, Navalny, according to polls, has a rating of ... about 2 percent. And nevertheless, Volkov is sure that a concerted campaign can cause widespread public anger over corruption. In a recent survey, 67% of Russians said they see corruption as the personal responsibility of Putin, who could not prevent large-scale embezzlement of Russia's national resources by government officials and businessmen. (Such a survey, we add, was indeed carried out: according to the March data of the Levada Center, 67% of respondents believesthat Vladimir Putin bears responsibility for the scale of abuses at the highest levels of power. At the same time, 79% of respondents believe that corruption has completely or largely struck the authorities in the Russian Federation.)

According to Volkov, Putin will have to face a truly popular opposition leader with millions of supporters across the country. “Even if we do not win, if Navalny can get only 30% again, this will completely change the situation in our country,” says Leonid Volkov about the upcoming presidential elections.

However, many political observers consider such ambitions unrealistic. The political climate in Russia is not suitable for such achievements. The Russian authorities are unlikely to allow Navalny to officially run for office, if only because in this case he will have to be put on national television. This reminds political analyst Dmitry Oreshkin. And even if Navalny was allowed to participate, he would hardly have received more than ten percent of the vote. “Despite Russia's growing economic difficulties, public disappointment with Putin has not yet reached a level that would allow Navalny to be perceived by Russians as a true alternative. And this process will take years, not months, left before the elections. Time is on Putin’s side, ”the political analyst says.

However, are the supporters of Navalny strong and united? And do they believe in their leader? Bennett believes that there are “cracks” in the young opposition.

Alexander Turovsky, a volunteer from a campaign in Moscow who was beaten during a search by the police, was angry with Navalny. After leaving the hospital, Turovsky accused the opposition leader of "ignoring". And announced, the journalist said that leaving the campaign Navalny. “For him, we are just infantry, a resource that he can sacrifice for the sake of his political battle,” he wrote on a social network. True, Volkov insisted that the headquarters offered Turovsky full support, including lawyers, and expressed suspicions that the volunteer was subjected to “terrible pressure” by the authorities. Others criticized Turovsky for the fact that he, in his attempts to discredit Navalny, handed over valuable materials to the state media. Whatever the truth, the journalist states, it was the first real crisis in Navalny’s election campaign.

At times, notes Bennett in conclusion, the current political campaign of Navalny may seem like something like an “alternative Russian reality”: that’s how the election campaign would have been in the country, had Putin not come to power.

According to the latest poll Levada Center, Navalny’s protest rallies, which took place on June 12 throughout Russia, did not add to his popularity. The recognition rating of the founder of the Anti-Corruption Fund after anti-corruption actions was 55%. He hasn't changed a bit since March. The lack of progress coincides with the POF study: according to their measurements, from March to June, the level of recognition of Navalny even slightly decreased: 45% and 43%, respectively.

Observed and commented on Oleg Chuvakin
- especially for topwar.ru
Ctrl Enter
Noticed a mistake Highlight text and press. Ctrl + Enter
We are
World MIC - who is in the topRegime change in the Russian Federation? Why Washington wants to end Vladimir Putin (“Global Research”, Canada)
120 comments
Information
Dear reader, to leave comments on the publication, you must to register.