"Off-balance sheet operations": where it takes and where it hides the money the US Federal Reserve

July 17 2017
12
The US Federal Reserve has an impact not only on US policy, but also on world politics. And on the economy, of course. The ruble exchange rate, for example, can be shaken not by a decision, but only by a statement from the Fed. Why, there is a ruble, which runs for oil, like a peg, - the comments of the Fed leadership easily affect even the indices of Asian exchanges. However, in recent years, something is not going well in the American financial kingdom ... 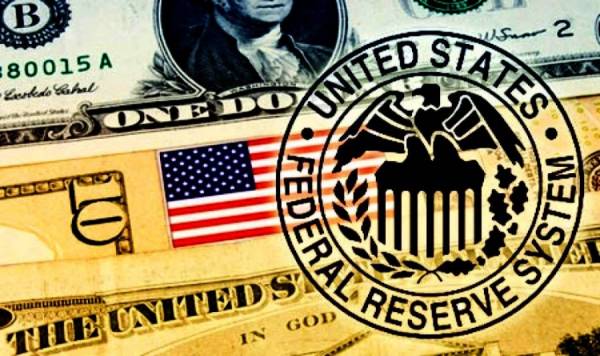 In foreign exchange trading last Wednesday, the ruble suddenly went up. This happened after the statement of the Fed. On 19: 58 MSK. dollar got down to the Russian ruble on 72 pennies.

Asia Pacific stock exchanges on Thursday morning too showed growth. As of 07.49 Moscow time, the Shanghai Composite Index (Shanghai Stock Exchange) increased by 0,44%, the Hong Kong Hang Seng Index - by 1,07%, and the Korean KOSPI - by 1,23%. It is noted that these exchanges are growing after the US market after the speech of J. Yellen.

The thing is that the head of the Fed has promised to raise interest rates in the United States, but only very gradually. There will be no strong increase at all. Speaking to Congressmen, Madame Yellen reportedthat the Fed will collapse a large-scale portfolio of bonds, but at the same time it will closely monitor the level of inflation.

According to Yellen, the economy in the country is growing slowly, but the increase in the number of jobs continues, and consumer spending is kept at a confident level. In addition, increased investment in the business.

The result of the influence of Janet Yellen's statement on the home economy: on the US stock markets on Wednesday there was an increase, and the Dow reached a record high.

According to some experts, Washington has enormous problems because of the growing debt, and the Fed has already turned its back on supporting the US debt pyramid. There is also an opinion that Janet Yellen will soon say goodbye to the post of the Fed chairwoman.

The hypothesis that the Fed has great difficulty in maintaining the debt pyramid of America is considered by the well-known economist Valentin Katasonov on the pages of the publication "Fund of Strategic Culture".

The expert reminds: the holes of the US federal budget are plugged with debt securities issued by the US Treasury (bonds, notes, notes). However, it is becoming increasingly difficult to insert a “gag”. There are three reasons for this.

2. Traditional conservative investors began to refuse treasury securities: social security funds, pension funds, insurance companies. These papers do not provide the yield they need: over the years, these conservative investors have become gambling financial market players, according to Katasonov. Bottom line: in the group of major institutional investors in the United States (pension and insurance funds), the share of treasure bonds in assets decreased to 10%.

3. In 2014, the Federal Reserve completed its quantitative easing program, which provided for the purchase of US Treasury and mortgage securities. Now, the Fed must begin "unloading" the balance, resembling a bubble. "Unloading" involves the sale of treasury securities, but to whom to sell at low demand?

Overall result: it became difficult for the government to maintain the state’s debt with treasury bills. And the obvious primary means here is raising the Fed's key rate (which, we recall, is interpreted by J. Yellen, based on "gradualness"). This should increase the yield of US Treasury securities and revive demand. However, Katasonov (more precisely, the American Ministry of Finance) sees many solutions to this solution.

The Ministry of Finance has already recalled: almost two hundred billion dollars is spent on servicing the US debt annually (approximately 7-8% of federal budget spending). Increasing the rate, apparently, will lead to the fact that the cost of servicing the debt will become the main item of expenditure.

In recent years, “exotic” buyers have appeared at the treasurers. “At the end of the first quarter of 2017 of the year,” writes V. Katasonov, “the volume of treasury securities held by foreign owners was equal to 6,07 trillion. dollars compared to 6,24 trillion dollars a year before. The reduction was only 0,17 trillion. dollars It would be much larger, but the massive sales of a number of countries were offset by a number of exotic states and jurisdictions acting as buyers. New jurisdictions have appeared in the list of the main foreign holders of US Treasury securities, which before the financial crisis 2007-2009. and the COP program in the US was not in the top twenty. These are Ireland and the Cayman Islands, which today took the third and fifth places in the list of leading holders of US government securities. The value of the US Treasury portfolios in these jurisdictions far exceeds their GDP. Countries such as Belgium, Luxembourg and Switzerland were among the leading holders of US Treasury securities a decade ago, but their activity in purchasing such securities has increased significantly in the current decade, especially after the completion of the American COP program. ”

Such “compensations” are provided mainly by private investors. It is known that the mentioned jurisdictions are offshore (more than seven hundred companies of American origin are registered in Ireland alone). The same with the Cayman Islands, a thriving offshore center. Experts believe that investing huge amounts of money in treasury investors are pushing hopes to increase the yield of securities.

Katasonov is voicing a different version: the purchases of US government securities are carried out ... by the US Federal Reserve itself! The program of quantitative easing is over, and now the US Fed is buying securities in secret, acting through funds and companies owned by its main shareholders and located in jurisdictions. Canadian financial analyst Rob Kirby and American bank specialist Ellen Brown point out that the former Fed Chairman, Ben Bernanke, started the “backstage buying”. This version is supported by economist Paul Craig Roberts.

Katasonov himself is confused by “only one moment”. Where does the money come from? What are the huge purchases?

The expert recalls the so-called off-balance sheet operations - approximately the kind that the Federal Reserve carried out during the years of the financial crisis that began in 2007. In those years, Michael Bloomberg managed to achieve a partial audit of the Fed through the US Congress. It turned out that the Federal Reserve had issued loans worth over 16 trillions dollars at the time. Ben Bernanke was unable to say anything intelligible to the congressmen, and then the matter was hushed up.

It remains to believe that the Fed continues to buy treasury securities, simply using the "printing press".

In connection with the hypotheses of American experts and the assumptions of Katasonov, the information on the probable decision of President Trump is very interesting.

It is curious that Mr. Trump is going to change the Fed authorities: instead of Janet Yellen, he will put another person on the post of the Fed head.

The US president is leaning toward the nomination for the post of head of the Federal Reserve Gary Cohn. Replacement may occur next year. About this anonymously сообщают informed persons from the White House.

The aforementioned Mr. Kohn now heads the National Economic Council at the White House, and previously worked as president of Goldman Sachs. The publication "Politico" says he writes that Cohn is guaranteed to be appointed to the post of Fed Chairman.

As for the replacement period, everything is obvious: Madame Yellen began her work in February 2014 of the year, and the term of office of the head of the Fed is 4 of the year. No later than February of next year, the system will have a new chief, and the world exchanges are expecting new shocks, for the whole world is still spinning around the dollar. It is also possible that in 2018, Mr. Trump and the new bosses of the printing press will try to improve the affairs of the American state with the help of a winning war.