July 12 2017
177
Thunder, lightning, tremors of the earth, the eruption of political volcanoes. Something like this can be characterized by the hysteria surrounding the appearance in Western mass media of materials about the supply of turbines of the German manufacturer Siemens to the Crimea, bypassing the existing sanctions. We are talking about two Siemens turbines, which, allegedly, were supplied for the Sevastopol TPP. Despite the fact that the very delivery of the German equipment to the Crimean peninsula is described in the Western media with numerous reservations in the “probably” and “possible” style, the hysteria is gaining momentum.


The main claim to Siemens is from the European Commission, which itself is under a heel, you know who ... The EC said that the German company had violated the sanctions regime applicable to Russia in the Crimea.

A brief excursion into history deals to understand the essence of the claims. The German concern Siemens, which has a representative office in Russia in the form of Siemens Gas Turbines Technology LLC (Russian share - 35%, German - 65%), sells its own gas turbines SGT5-2000E to Technopromexport ". At the same time, it is claimed that representatives of Technopromexport allegedly almost on the Bible swore that they would use turbines exclusively for projects on “mainland” Russia - in the Krasnodar Territory. The German concern, “unaware of the evil,” signed a contract, received money and uncorked champagne for the deal. Last year almost all of the Ukrainian mass media wrote about the deal, which proceeded with bile because their own (sufficient) volumes of electricity would soon be generated in the Crimea. 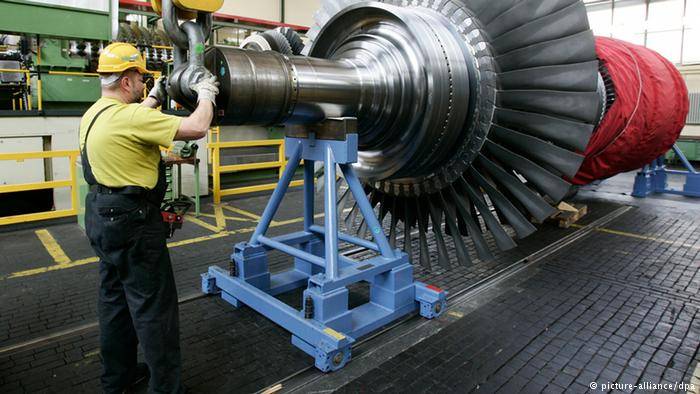 The months went by ... And now - information about German-made turbines, which “were treacherously forwarded to the Crimea,” came to light a little west of Berlin. The material caused a wide political resonance in the West, and Siemens was threatened with serious consequences for circumventing the sanctions. The management of Siemens answered: we are not guilty, these Russians have deceived us, because we could not have imagined ... and all that ... Ukraine joined, declaring that you can’t have anything to do with these Russians, because “Aggressors”, “occupiers”, “liars” and “enslavers of free nations”.

Now the German concern Siemens, which has already decided that none of the “well-wishers” will remember about the sanctions, followed the path of satisfaction claims - satisfaction for a monstrous insult of honor ... Representatives of the company filed a lawsuit against Technopromexport. Yes, not somewhere, but to the Moscow Arbitration Court. The same court will consider the activity of the joint Russian-German enterprise OOO Siemens Gas Turbine Technologies.

At the same time, Siemens claims that if it “turns out” that the turbines are really “Siemens”, then the company “will never again never supply anything to Russia.”

In general, the role of honest Germans slandered by mean Russians was played with a bang - as they say, without make-up and a long rehearsal process. Stanislavsky would say: I believe!

In Russia, they also played their part. From the statement of the press secretary of the President of the Russian Federation Dmitry Peskov:
I leave this question without comment, although I will add that Russian-made turbines, assembled from Russian components, are indeed installed in the Crimea.

It remained to add: I ask the one who says that Siemens Gas Turbines Technology LLC, whose name is indicated in Cyrillic, is not a Russian manufacturer, first throw a stone at me.

And then they believed.

Ukraine does not believe ... What are you going to do ...

Representatives of a country that is holding on to anti-Russian sanctions, as if drowning in a straw, declare that neither Siemens nor the Moscow Arbitration Court can be trusted in any way. What you need to attract "international experts" who will document the transportation of German turbines to the sanctions Crimea. Instead of a Russian court, a lawsuit must be filed almost to Strasbourg.

The situation is generally interesting. Pushing European products to Russia through Belarus with label gluing is this, please. Please also declare strict observance of human rights in Europe. And what is the ban on the supply of equipment that is intended to receive light and heat for more than two million Crimeans? How does this generally fit in with human rights?

Anyway. In the end, the turbines on the peninsula are set, and then let them even understand The Hague, whether they are German or not German. Here another question is more relevant. On the eve of the "VO" there was a material about the international exhibition "Innoprom-2017" - the one whose business partner is the Japanese. So ... At Innoprom they consider the wonders of technology, which are made not only in Japan, but, as stated, in Russia too: complexes for diagnosing the condition of drivers during a voyage, electric taxi, promising nano-processing machines, robotic tools for metal cutting, deposition of special sputtering, miniaturization technology of satellites, etc. What I need it for. And the fact that we create a robot that is designed to recognize dog excrement in a sandbox, and we buy turbines for a gas thermal power plant abroad.

Here, of course, you can look for switchmen, write angry public letters, etc., but you need to state that the sanctions were sharpened. Those who introduced the sanctions were well aware of the trail that left “free 90-e” on the production soil of our country. Blow by blow, blow by blow - at factories, research institutes, programs that were inherited from the technological potential of the USSR. The thesis that for one “voucher” you will receive two “Volga”, and that chewing gum with “Coke” - here it is, freedom, the majority of the population suppressed an understanding of the obvious - the country was rolling into a technological abyss. This abyss has led to the fact that today there is no longer enough just the desire to start our own production of turbines suitable for the characteristics of TPPs. There is a market that says: “it will be cheaper to buy from anyone than to produce it yourself”. And, it turns out, really nothing to produce. So they bought it from the Germans. Could the Chinese or someone else. Essentially, in general, does not change, even taking into account the presence of euro-sanctions and the lack of sanctions by the PRC.

However, the situation should not be interpreted from the perspective of "delayed ... polymers." This is both a signal and a lesson for the state. If you do not sweep away what is artificially implanted by the adherents of the deification of the paper-note mass, and start thinking about real investments in the domestic machine-tool industry, instrument-making, and the production of machines and units, Russia will continue to look with interest at the European Commission and other obscurantists. - For those who are behind double standards and the desire to curry favor with Big Brother, he is ready to neglect the interests of even his own taxpayers, not to mention the vital interests of the same Crimeans.

So Crimea gives us all good podzh..nik incentive, so that in this case, the sanctions to turn Russia to benefit. Here are just "effective managers" can again say their "weighty" word ...