28 2017 June
42
So there was a job for the Ukrainian department of the missing region. We are talking about the "prosecutor's office" of the so-called Autonomous Republic of Crimea, which ceased to exist in May 2014 in connection with the outcome of the Crimean and Sevastopol referendum. However, the absence of a region on the modern map of Ukraine, as it turns out, does not affect the activity of the officials sitting on the salary resulting from the taxes of ordinary Ukrainians.

Today, the ARC Prosecutor’s Office website publishes a statement saying that the agency turned to NASA (the American aerospace agency) with the aim of (attention!) To conduct an “inspection of the construction of the Crimean bridge”. 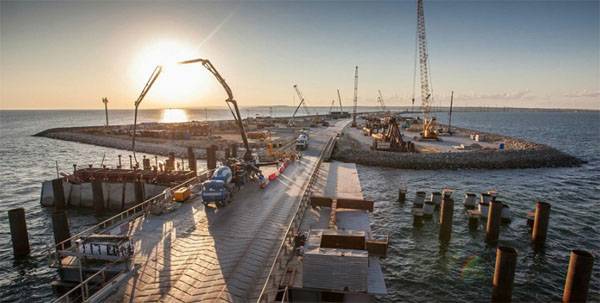 The ARC Prosecutor’s Office asks NASA to check how “great harm” the construction of the bridge across the Kerch Strait is “doing to the environment”.

From the material press service "Prosecutor's Office of the ARC":
Today, 27 June, chaired by the prosecutor of the Autonomous Republic of Crimea Gunduz Mammadov, a meeting was held with representatives of the Main Directorate of the National Police in the Autonomous Republic of Crimea and the city of Sevastopol, the Regional Center for Human Rights, experts in the field of ecology and employees of the prosecutor's office to document violations of environmental safety rules during construction transport transition to the Crimea peninsula through the Kerch Strait as part of criminal proceedings.

During the meeting, the main directions in which investigative actions are carried out in this production are noted and their activation is noted, including with the aim of preventing the destruction of rare species of living organisms listed in the Red Book.

Among the main areas: carrying out all necessary examinations; determining losses caused to Ukraine as a result of the construction of a facility that poses a serious danger to the ecology of the Black and Azov seas, as well as collecting evidence of violations of international maritime law for further consideration in international courts.

Theater of the absurd is that Ukraine “entrusts” the issues of environmental safety to the office of the state whose president announced its withdrawal from the environmental convention (climate convention). Moreover, a country that proposes on its territory to store spent nuclear fuel - without technological utilization - from nuclear power plants of the European Union countries, is discussing the issue.

And about the problems of the growth of the Lviv dump from NASA, Ukraine does not want to clarify anything?