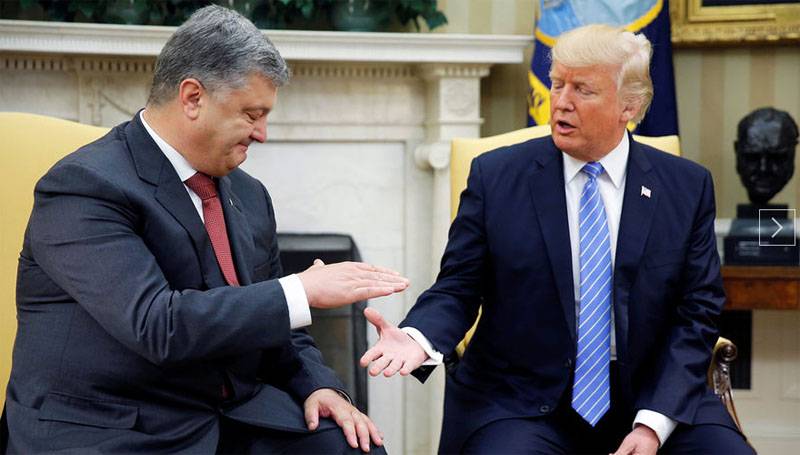 Approximately such a “conversation” took place in the Oval Office of the White House between the US President and the President of Ukraine. Not for nothing, a few hours before the visit to the White House, “The Guardian” came out with a material in which it was stated that Poroshenko expects a “humiliating reception.”

For a start, briefly about the background of the "meeting" Poroshenko was in such a hurry to Trump that when his plane took off from Kiev airport, the meeting was not agreed. The said publication, citing sources in the US presidential administration, reported that Trump "doubted whether Poroshenko needed to be taken or not." As a result, a kind of decision was made - “if this person arrives in the US, then bring him to the Oval Office during one of Trump's meetings with US officials, so as not to disrupt the business schedule of the American president.” As you can see, the Ukrainian president did not fit into this schedule.

The White House began to think at what point Poroshenko can be presented to Trump. They figured out ... It was decided that if they were to start the Ukrainian president, who had already announced that he would meet with Trump "before Putin", for an audience with Trump, then during the time in the Oval Office, Assistant to the President of the USA on national security Herbert McMaster.

By the way, journalists asked the official representative of the White House about the nature of the meeting between Trump and Poroshenko. Some delay in the response of Sean Spicer confirmed the material “The Guardian” that the reception will not be sublime.

From the answer of Sean Spicer:
As far as I understand, the vice president (Mike Pence) will meet with him (Poroshenko).

But what about Trump? ..

In order to somehow get excited on the background of the fact that the American authorities did not have much desire to meet with him, Poroshenko on camera gathered a few dozen representatives of the Ukrainian diaspora in the United States. And the Americans of the Ukrainian (and for the most part - the Soviet) origin Poroshenko announced that in Washington he was “awaiting a fantastic program”.

From the statement of the President of Ukraine:
See how powerful and fantastic support we have in the United States. I arrived today with the first visit after the presidential election (in the USA). And I will have a fantastic program. Ukraine in the United States has strong bipartisan support. You are experiencing in your hearts everything that Ukraine has encountered. The diaspora is a great help, including our military, to stop the Russian aggression.

"Diaspora" tightened. I felt that I was hinting again at the “dumps” and started waving the Ukrainian flags not so actively, bearing in mind how many billions Poroshenko’s accounts from overseas aid and cutting of Ukrainian assets swelled.

The first of the US ministers Poroshenko managed to meet was Energy Minister Rick Perry. And this is the case when Poroshenko Washington really comes in handy. The fact is that the States have set themselves the strategic task of ousting Russian energy from the European market. The need to abandon Russian gas with the replacement of liquefied gas from the US is actually spoken directly, forcing the previously obedient Germans and Austrians to react hard. And so that the Germans and the same Austrians “penetrate”, Washington is ready to use Peter Alekseevich. How? 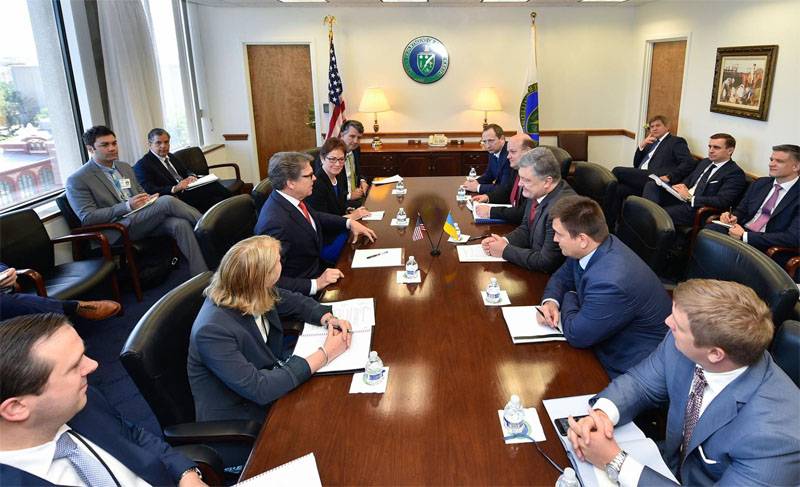 Actually very simple. Through Poroshenko and his constant anti-Russian (public) rhetoric, the States intend to bring the following thought to the European “allies”: Europe’s interests are important and wonderful, but can we leave the “democratic” Ukraine with an empty pipe to 2019? ..

However, it is clear that the same Minister of American Energy thinks about Ukraine last, but it is the “button accordion” in the form of Ukrainian democracy that will play with the aim of trying to push substantially larger amounts of American liquefied gas to the European market. And what is needed for this? To do this, it is necessary to spoil the blood of those who participate in the Nord Stream 2 project as much as possible.

In this regard, it’s certainly not a coincidence that immediately before Poroshenko’s meeting with Perry, the head of Naftogaz proposed that the United States impose sanctions on all those companies (including German and other European) that decided to become shareholders of SP-2. In such a situation, the head of Naftogaz turns into the talking head that the US uses as voicing possible consequences for EU companies in the event of their contacts with Russia and Gazprom.

From the statement Poroshenko:
With US Secretary of Energy Rick Perry, they discussed the implementation of joint projects in the nuclear power industry, the production of energy in Ukraine, as well as the possibility of supplying alternative fuels, in particular liquefied gas from the United States.
They also talked about strengthening European energy security, particularly in the context of the possibilities for modernizing and developing Ukraine’s transit capacities and implementing new European transport and energy projects.

Thanks to the American side for significant practical assistance in strengthening the energy security of Ukraine.

Hypothetically. The United States imposes sanctions on all companies involved in the construction of the Nord Stream 2. As in the case of South Stream, the European partners under the American stick with the nails merge together. Not immediately, of course. Inertia ... Merge - once. They go bankrupt (which is quite possible without a filled Russian pipe) - two. Their place is occupied by the most democratic of the democratic - companies from the United States. This fact also strains the Norwegians, who have a long-lived habitat in Europe, a niche.

Next, crumpled Europe makes a deal on the supply of American liquefied gas, the cost of which on average will cost (by the most conservative estimates) a third more expensive than the Russian "pipe". Russia throws the project "SP-2", throws to rot "pipe" through Ukraine. The level of LNG supplies from the United States will have to be increased at least 3-3,5 times due to the resulting shortage in order to keep the European market and not to give an oak to the democratic project "Ukraine".

The result is a rise in prices for “blue fuel”, against which Russia and Turkey are completing the Turkish Stream, plus Russia and China are embodying the “Power of Siberia” in reality. Immediately looms Qatar, which recently goes to the allies of Turkey and is clearly looking for contacts with Moscow. With the skillful support of Qatar by Moscow (when Qatari LNG may cost 15-20 per cent cheaper than American LNG), it’s stars and stripes partners who can be pushed into Doha. Meanwhile, in Europe, forces came to power, which ate American, including economic, occupational dictate. And they will come. If not today, then tomorrow. Since it will not endlessly continue by definition. What will happen next? But they will take and “ask” the United States to liberate the territory ... Utopia? Well, Atambayev from Kyrgyzstan (from Manas) asked for it, though not for nothing from Russia. But then she and geopolitics ...

But Poroshenko was the first to "talk" with Trump ...