TAPI, or How to turn Afghanistan into a gas transit state?

16 2017 June
37
While the attention of millions was riveted on a straight line with Russian President Vladimir Putin, other events took place in the world ... Attention attracted several such events related to such a region as Central Asia on the eve. Given the fact that it would be strange to push the region beyond the interests of the leading world powers, it is difficult to leave the Central Asian events of the last days unlighted.


One of such events is connected with the expressed interest of official Tashkent (Uzbekistan) in participating in the creation of a gas pipeline through which Turkmen gas will flow to India. For obvious reasons, the project in question is causing huge interest from both India and Turkmenistan. India, as a rapidly growing economy, needs to increase the volume of purchased relatively inexpensive energy. In turn, official Ashgabat is interested in investing in the gas industry, which brings substantial funds to the state budget for the country. The interest of Uzbekistan, which does not want to miss the opportunity to become a participant in the project that promises huge profits, is also clear.

In this regard, the question could arise: if the project is so promising, then why does the very same Uzbekistan show interest in it only now? There are at least two answers here. The first lies in the plane of safety. The second is in the geopolitical changes in southern Asia.

The fact is that the gas transmission project under discussion is the so-called TAPI (after the first letters of the names of the states that initially made the decision on possible construction: Turkmenistan, Afghanistan, Pakistan, India). You do not need supernatural intuition to figure out why security issues may arise during the project implementation ... At least one link in this chain looks weak. And this is Afghanistan.

For reference: the TAPI gas pipeline in planning documents has a length of more than 1,7 thousand km. The approximate cost of the project is about 8 billion dollars. Predicted capacity - 33 billion cubic meters of gas per year. Such capacity should be provided by the largest Turkmen gas field Galkynysh (Galkynyş), located in the Mary region (Mary province). According to international expert groups, Galkynysh has impressive reserves of not only gas (more than 21 trillion cubic meters), but also oil (no less than 300 million tons). The field has already been exploited over the past few years, but Ashgabat wants to use it to the full.

The first stone in the construction of TAPI was solemnly laid in the Turkmen Mary 13 December 2015. Beyond the first stone and work in the Turkmen territory, the process has not progressed much. And the same India would have invested a hundred percent in the project long ago, if it were not for the fact that, first, the gas pipe needs to be “pulled” through Herat and Kandahar, where the official Afghan authorities hardly control the territory even during the day Secondly, about 800 km of the route must go through Pakistan, with which New Delhi has, to put it mildly, uneasy relations. 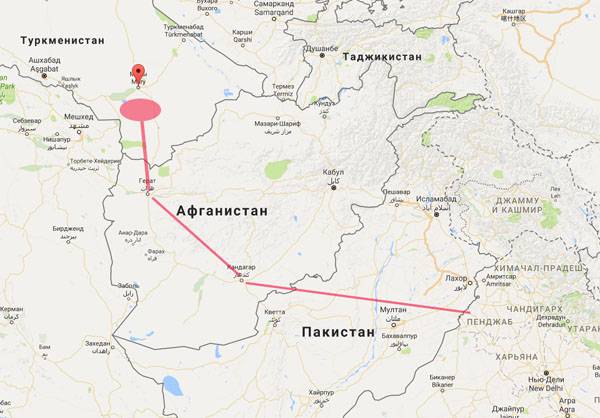 However, there is still a headache in the form of Afghanistan. And it's not just that you have to go around the mountain ranges. The main problem is complete terrorist lawlessness in this state, which, in the presence of the American military contingent, is clearly not going to stop.

That is why I want, and prickly. The same Uzbekistan, on the one hand, clearly does not want to stay away from the profitable project, on the other hand, the risks are great.

From the statement of the chairman of the board of holding "Uzbekneftegaz" Alisher Sultanov:
The Turkmen side has made us an offer to take part in TAPI. In turn, the President of Uzbekistan ordered the company to work on this issue. However, I specify - now there is no official statement about the entry of Uzbekistan into the TAPI project or about our participation in it.

Tashkent does not hide the fact that it is ready to participate in the project if Ashgabat finds the operator who will take responsibility for the construction of the gas pipeline throughout its length. The whole question is, who can become such an operator who can not only build pipelines of impressive length, but also level down threats during construction.

And then, as if by chance, again in the Central Asian media passed news that Turkmenistan is interested in the passage of TAPI branches not only to the south, but also to the north - to Kazakhstan and Russia. Does this mean that Russia is already making a proposal for the implementation of how profitable, and so risky a project with a large-scale economic entry into the region?

In this regard, it can be assumed that if the project is continued, it will be only on the basis of agreements that could interest the parties to the Afghan conflict. The fact that the West has recently accused Russia of allegedly having contacts with the Taliban (banned in the Russian Federation) is often reported by the media. It’s only for the West that “it is possible” to contact those whom it deems necessary, in their own interests ...

And here it must be stated that Moscow has recently gained substantial experience in the diplomacy that allows negotiating with even those with whom it seems at first glance impossible. As an example, the use of contacts with Turkey and Iran for the cessation of hostilities by the so-called armed opposition in Syria. But one can hardly expect that one “exceptional” overseas power would like all of this, especially considering that the “exceptional” power may well be confronted with the fact - as they put before the fact in the north of Iraq with the Kurdish pipeline to Turkey and the invitation to the Rosneft project.

Is Russia eager to become a member of the TAPI project? - a separate question, the answer to which can be expressed only in the format of assumptions. But the assumption is: it is quite possible that Moscow may even think about participation in the project, taking into account at least the fact that the oil pipeline in the far from the most peaceful North Iraq still managed to interest Russia. However, there, with the Turkish direction, there is still a greater geopolitical interest, and here - Russia has less risky ways to maintain interstate (including economic) relations, if we are talking only about financial returns. It is, of course, quite humanitarian to bury the belligerents for the sake of building gas pipelines, but the main thing here is not to overdo it.