Who pushes NATO to open confrontation with Russia. Dark script

16 2017 June
89
Sometimes, looking through the Russian media, I am amazed at how quickly we move away from hot topics. Something happened on the borders of huge Russia - all the media is simply clogged with materials about this incident. We sort everything to the "bones". And the "bones" themselves are not averse to spray onto atoms. And in a day or two you will not find any information. To the archive, to the archive, to the archive ... Even a peculiar "excuse" was invented. The world is changing so quickly that the format of the publication simply does not allow to follow everything at once. Yes, and readers require answers to specific questions on these topics. 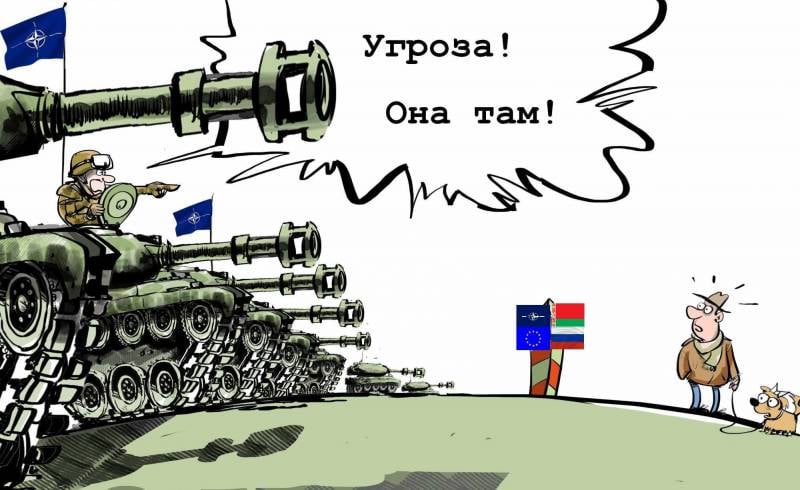 Meanwhile, many military-political issues are not resolved on the “day of conversion”, but in a rather long period. Without much pathos and screams of the radicals. Military by nature is a pessimist. They have such a job. Consider the ugliest scenarios and plan your answers. Well, and answer, if necessary.

This time the Baltic states became such an “archival” topic. And indeed the whole direction. Well, NATO units were deployed in the Baltics. So we answered like. Well, the next Baltic president is saying something there. So what? We are big, do not notice the "squeak of a mosquito." And by the way, mosquitoes suffer many heinous diseases. Such a “hustler” can cause a disease for a big man ...

In the same way, for some reason, we also treat our traditional friends. I mean the Belarusians. Live like a good. Some kind of "disassembly" with us is not satisfied. So what to talk about? But Belarus is not just a friend. It is also the second (and perhaps the first) trump card after Kaliningrad, which allows us to "crush" NATO.

So, the NATO battalions are located in the Baltic States. In fact, we understand that this temporary measure is forever. The Baltic presidents, especially the Lithuanian Dalia Grybauskaite, just glow with happiness. And Dalia herself almost weekly informs the world about the "main threat to Lithuania, Poland and NATO." About Russia. And, by the way, Lithuania participates in all NATO exercises in the immediate vicinity of our borders. In all! Preparing to "repel the invasion."

Few people remember that our partner relations, even friendly relations with Belarus, are militarily supported by the traditional annual exercises West-2017 (the year naturally changes). Let me remind you, these exercises will be held at the sites of Russia and Belarus from 14 to 20 this September.

The goals of these teachings are several. From the preparation and use of groups of troops in the interests of ensuring the military security of the allied state to improving the work of the headquarters of the armies of the two countries. In general, as in spring, said President of Belarus Alexander Lukashenko, the exercise will be purely defensive in nature.

“Once again I want to emphasize for those who send these signals [on the preparation of an attack on the Baltic States and Poland]: we don’t shut down from anyone. We will invite everyone to these exercises. And you will see that they are exclusively defensive in nature. we, the Russian Federation, are not going to attack something, we are not going to provoke anyone here. "

It seems to be all put in place. The teachings are traditional. The presence of observers is not prohibited. The nature of the "game" will be able to determine any military. From any country. But no. The usual formal logic is not for our traditional Polish and Baltic "friends." From their point of view, they [Russia and Belarus] "are demonstratively preparing for war."

It would be strange if the armed forces of any country in the world were not "preparing for war." Why then are they at all? The army must always be ready precisely for war ...

Today, albeit not very loudly, but quite noticeably Poland and the Baltic States are “putting pressure” on the NATO command. Remember that mischievous old woman from "The Tale of the Fisherman and the Fish"? “I don’t want to be a pillar noblewoman ...” Approximately the same position was taken today by probably the most aggressive President Dalia Grybauskaite.

What are the NATO battalions in the Baltic? Unless they can protect the most vulnerable "point"? NATO must "provide security in the event of an alleged seizure of the so-called Suwalki corridor." Who does not remember this name, I will explain. This is a land corridor 64 km long on the border of Poland and Lithuania. That it will have to be defended "to the last drop of blood of Lithuanian hunters." Since, the seizure of this corridor will allow us to connect the territories of Belarus and the Kaliningrad region, as well as to cut off the Baltic states from the NATO countries.

So why, again, "still more old woman curses ..."? What does Lithuania lack again for a sense of its own security? And it's pretty simple. The solution to this problem should be "maximally saturating the eastern flank of NATO with air defense weapons and other weapons."

It is interesting to look at the situation from the outside. It is clear that Dahl cannot independently make such demands. How we relate to the representatives of all these micro countries in the alliance, we remember from the recent incident with the Prime Minister of Montenegro. Every cricket know your hearth. Then who?

And here the trail "floated" overseas. Remember the statement by US Vice President Michael Pence on the Atlantic Council? Remember who is in the main "threats" to the world today? Russia, Iran and terrorism! And yet not really "seen" by us. Actual confirmation of the US commitment to the alliance and their readiness to protect NATO allies in the framework of the 5 article of the Charter.

Yes, and other fairly bright representatives of the American establishment in this topic lit up. Starting from the chairman of the Senate Committee on Armed Forces, John McCain, Republican Lindsay Graham, Democrat Amy Klobushar, and ending with the American "Lithuanians" in the US Congress, Republican John Shimkus and Democrat Richard Durbina ...

Agree, even one John McCain is enough to understand where certain forces are pushing the world through Dali Grybauskaite's rhetoric. If we put aside the "politeness", then McCain has been convincing the American people for many years, and Europeans too, of the inevitability of war with Russia. It is inevitable.

To be honest, our position on this issue looks slurred. Trying to "talk to the bully," we completely forget that serious crimes often result in the lack of punishment for administrative misconduct. Bullies understand the power. And if they did not feel this power, the audacity of their actions only grows.

What is the official statement of Russia at the highest level about the imposition of "imaginary threats from our side"? Beautifully called "complete nonsense"? But in essence? What did the "NATO partners" answer to the statement about the violation of the Russia-NATO Founding Act 1997 of the year after the start of the deployment of the battalions in the Baltic States? Again, if we discard the "diplomatic polite", we were sent. Sent because of "the loss of its relevance." And we went ...

So what do we see today in the Baltic? Again have to look into the "archive". In our own articles about the deployment of missile defense systems in Poland and Romania. Already forgot? And today Grybauskaite requires exactly the same systems in Lithuania! PRO medium range!

And how will this affect our security? I will no longer recall the balance of power in this region. How will Belarus, Kaliningrad, Petersburg, Moscow feel? And yet, what is the procedure for the actions of the missile defense forces in the event of a sudden attack by the enemy? How many approvals is necessary for the commander to give the start command?

I did not specifically focus on yet another requirement of Grybauskaite. On the simplified NATO procedure for responding to new threats of a hybrid war. Of course, now “ostriches” will say that we are talking about cyber attacks, information confrontation and so on. What do you mean? Does a hybrid war rule out war alone? Alas, it is just a part of ordinary war. So it was and always will be.

But back to the upcoming exercises of the armed forces of Russia and Belarus. How is the activity of the Baltic and Polish politicians in NATO and these exercises? Those who carefully read what is written above, have already concluded. For the "browsing" and "search engines inaccuracies" I will do it.

Routine exercises, in general, can be a catalyst for quite serious complications in Russia-NATO relations. The “button” in the case of the deployment of missile defense systems in the Baltic States is transmitted by quite aggressive and “headless” Baltic and Polish politicians. Indeed, after "in response to the aggressive actions of Russia and Belarus," the same Lithuania "will be forced to deliver a preemptive strike," no one will understand whether this strike is right or wrong. Both we and NATO will simply be forced to start a war ...

Prospects are not pleasant. But above, I already wrote about the professional pessimism of the military. The militarization of the region has already led to a worsening of relations between Russia and its allies and NATO countries. Of course, there is hope that there are politicians in the United States and in Europe who have retained common sense. And in Poland and the Baltic States?

For more than three years, we have been discussing the possibility of open confrontation between NATO and Russia in Ukraine. There were many points of view on this issue. And things are there, as Ivan Krylov wrote. Maybe there will be about the same state?

Alas, the opposition in Ukraine is dangerous for NATO. Just because Ukraine is still inhabited by people. And the Ukrainians still in the Patriotic showed that they know how to fight in the rear of the enemy. Guerrillas do not need anyone. But in the Baltics this will not happen. 30% of the young population of these countries have successfully mastered the European countries and are not going to return. Retired partisans will not go because of their age.

By the way, just for the curious: from 12 to 24 in June in Lithuania will be held the next large-scale international maneuvers "Iron Wolf - 2017". More than 5 thousands of troops from 10 countries will be involved. USA, UK, Germany, Norway, Poland, Lithuania, Belgium, Luxembourg, the Netherlands, Portugal! And what do you think, what task will be worked out in these exercises? The defense of the very Suwalki corridor.

And we will continue to "talk with hooligans"?