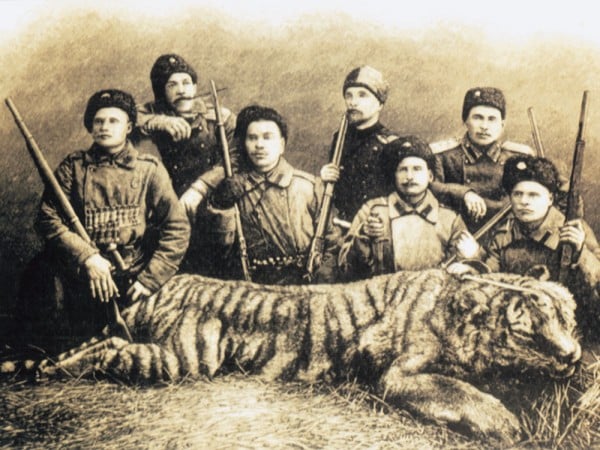 The board of the Ussuri Cossack troops was located in Vladivostok. At the end of the XIX century, the State Council sanctioned a new Cossack resettlement - from the European part of Russia to the Far East. The goal was a general increase in the number of Cossacks in the Far East and the protection of the territory along the Trans-Siberian Railway being built. This resettlement lasted almost until World War 1.

An active role in the positive resolution of this issue was played by the military ataman of the Amur Cossack troops, the Amur Governor-General in 1893-1898, Lieutenant-General Sergei Mikhailovich Dukhovskoy.

Aware of the need to strengthen the Cossack population on the border, he managed to convince the tsar to strengthen the Ussurian and Amur troops at the expense of Cossack immigrants from other troops: from Transbaikalian, Don, Orenburg, Kuban, Terek and Ural Cossack troops. Lieutenant-General Dukhovskoy, seeing the serious economic and economic difficulties of the immigrants, in 1894, by his order, transferred to the use of the Ussurian Cossack army 9142 thousand acres of land suitable for farming. These lands were called the “withdrawal of Dukhovsky”.

Further, in the migration movement in the Ussuri army came a break. The reasons were the Russo-Japanese War and the revolutionary events of 1905. The resettlement resumed from 1907 and lasted several more years. Only for 1907-1909. 1800 families of Cossacks and peasants (enlisted in the Cossacks) from the European part of the country were resettled to the Ussurian army. The settlers erected dozens of settlements along the border with China. In 1907, there was a 71 Cossack settlement on the territory of the army, where 20753 people lived. (10878 men and 9875 women). On 1 in January 1913 in the territory of VHF there were 76 villages and villages where 34520 people lived. (18600 men and 15920 women). By 1917, the population of the Ussuri Cossack army reached 44434 people. (including 24469 men and 19865 women). This population was about 8% of the total number of residents of the Primorsky region.

The resettlement took place in very difficult conditions, the property was floated on rafts and boats, the cattle was walking along the shore. Initially, locations for the settlements were chosen by military officials. Naturally, they did not take into account that the Cossacks needed suitable land for farming. As a result of floods, crop failures, diseases, and other reasons, many Cossacks were forced to leave their families to earn their livelihood. The Cossacks could not buy equipment for the service until General Dukhovskoy intervened and did not allocate land suitable for farming. He also obtained permission to transfer Cossack settlements to these lands. It is hard to imagine how these people lived, they even had to plow the land with a rifle over their shoulders. Constant clashes with the Hunhuzs very much hindered the land development, but they gave combat experience. The life of the Ussuri Cossacks was low, their farms often had only one horse, which was used for civilian purposes in peacetime, and in the wartime - as cavalry.

On 1 January 1905, the Ussurian army listed 3308 lower ranks and only 1483 horses. In peacetime, the army put up a Ussuriysk Cossack cavalry division of two hundred members and a platoon in the Life Guards Consolidated Cossack Regiment. In wartime, an equestrian regiment of the 6-sotsennial composition, equestrian division of the 3-sotvennial composition.

Cossacks also served on the ships of the Amur-Ussuri Cossack flotilla. The flotilla was created in 1889 to monitor the border line, maintain communications between coastal stations and villages on the Amur and Ussuri rivers, transport military ranks, teams and cargoes in peacetime and wartime. The flotilla was maintained at the expense of the Amur and Ussuri Cossack troops.

2 June 1897. It was approved that Cossacks from the Amur and Ussuri forces with a total number of 50 people would be dressed up for service on the flotilla ships. Cossacks took part in suppressing the “Boxer rebellion” in China in 1900.

In 1904-05 army participated in the Russian-Japanese war. Been great. In the Russo-Japanese War 180 Cossacks-Ussurians became the St. George knights. General Mishchenko spoke very flatteringly about their actions. The Ussurians were well versed in the terrain, were hardy, inventive. The experience of clashes with the Chinese Hunhuzes was useful in this war.

In 1910, the Ussuri Cossacks saved Primorye from the plague epidemic. The plague that struck China from January to May 1910 threatened to spread into Russian territory. Cossack posts were set up along the entire border. Every day, 450 Cossacks carried service at risk to their own lives and prevented the epidemic from spreading to the Far Eastern lands.

Recently, the "Military Review" was an article about the actions of the Ussuri horse division. During the civil war, most Cossacks fought on the side of the whites and were forced to emigrate to China, Australia, the United States and other countries.

In 1922, the army was abolished. Under Soviet rule, the Ussuri Cossacks, like many other nations, were subjected to political repression. The most widespread were the three “cleansing” campaigns conducted during the period of the dispossession of the peasantry (the end of 20 — the beginning of 30); . The campaign of dispossession cruelly hit the Cossacks. First of all, representatives of the strongest, economically strong Cossack farms were expelled from their homes. Yes, and many middle-class Cossacks did not escape the plight of the dispossessed.

During the Great Patriotic War, part of the Ussuri Cossacks fought in 115 kav. regiment and other cavalry units and divisions. Cossacks fought in other branches of the army. This small army has done a lot in defending Russia's Far Eastern borders. Thanks to the Cossacks.