Russian crisis in the Oval Office

8 2017 June
8
"Informed sources" are convinced that Mr. Trump is about to start a personnel reshuffle in the administration. The “Russian” crisis in the White House is growing, there are more and more accusations addressed to the administration, the scandal flares up. Changes are needed, otherwise the Trump presidency is kaput. The talk is about creating a “military headquarters” in the White House: the guys from the presidential team are ready to “lie down on mattresses” according to the method of Don Corleone. 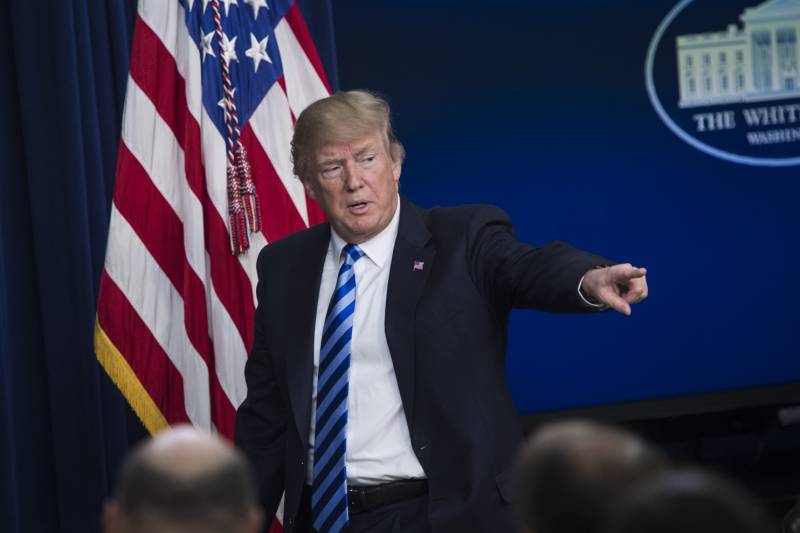 Donald Trump is considering a serious reshuffle in the conditions of the crisis associated with the Russian theme. This was told by John Wagner, Robert Costa and Ashley Parker in Washington Post.

Trump and his advisers believe that the “Russian” crisis threatens the presidency itself. Therefore, the possibility of replacing part of high-ranking employees and even creating a “military headquarters” in the White House is being considered. This correspondent reported some assistants and supporters of Trump.

The White House expects to conduct a systematic tough fight against the enemies of the Trump team, including those who denigrate Jared Kushner, the son-in-law of the president and at the same time senior adviser. The fight will be directed against those who accuse Trump of ties with the Kremlin.

In addition, the Trump team will try to find ways to “reinvigorate the political agenda” of Trump in Congress and revise the principles of communication between the White House and the people. The last point provides for trips and in general a “nationwide campaign”. Probably, Trump will directly appeal to his supporters. Changes in the frequency and nature of the briefings are also assumed.

Two sources close to the discussions in the “military headquarters” report that the White House uses the mafia terminology from the film “The Godfather”, namely the expression “lie down on mattresses”.

Kelliann Conway, an adviser to the president, negotiated with Trump's well-known supporters outside of Washington and on Capitol Hill and contacted people who participated in the Trump campaign. She asked them to actively participate in the support of the president. This publication was reported by three Republicans working in the White House as consultants.

It is also about changing the style of communication with the masses on Twitter. The “external” legal team, led by Mark Kasovitz, is preparing to meet with Trump and advise him on further comments on the “Russian” investigation on Twitter.

Lawyers strongly recommend that Mr. Trump not write hot texts on Twitter and comment on the topic of “Russian investigations.” Lawyers believe that such tweets can harm him even more: his opponents will find that he is trying to thwart the investigation.

The article mentions Jared Kushner, who played an active role in rethinking and restructuring the public relations team and creating an internal group that responds “to an influx of negative stories and revelations about the FBI investigation” regarding the “Russian trace”.

“The bottom line is that they need fresh power,” says Barry Bennett, who worked as Trump’s political adviser during the election campaign. According to him, the Trump team is involved in "full-scale war."

Sources indicate that while Mr. Trump participated in meetings with world leaders, his senior assistants, including Bannon, Kouchner and R. Pribus, met at the White House and discussed “potential rearrangements.”

Kouchner's persona became “particularly sensitive” in the White House, since his actions were targeted by FBI investigators in the context of studying the issue of “Russia's interference in the presidential election.” In particular, there is evidence that the aforementioned Kouchner and the Russian ambassador in Washington were discussing the possibility of creating a "secure secret channel of communication between the Trump transition team and the Kremlin." The communication was supposed to be carried out through “Russian diplomatic institutions”.

Some White House helpers are wondering if Kouchner should play a smaller role, or even leave, at least until the problems associated with Russia calm down. However, with Kouchner himself, this question is somehow being discussed "reluctantly." There is also information that part of the White House team does not want to see Kouchner here at all. Kouchner himself, according to sources, "does not plan" to accept a secondary role. On the other hand, from the “nonstop madness” he was already tired.

Trump himself expressed disappointment (both publicly and privately) with how his team works in the field of public relations.

Further, the article indicates that it has become problematic to discuss any issues related to Russia and Kushner's activities. Both Russia and Kushner have become "too much" in American the news... Journalists are nervous at briefings - in particular, they were nervous after Mr. McMaster "largely" avoided answering several questions related to the same Kushner.

The expected restructuring in the White House comes at a key moment in the Trump presidency: his rating continues to sink, and he will have difficult congressional battles over revising some laws and restructuring the tax code.

As for the idea of ​​a "military headquarters," then we are talking about an analogue of the model, similar to the one that appeared in the Oval Office during the reign of President Bill Clinton, who got the scandal with Monica Lewinsky. Clinton, in addition to the usual White House staff, gathered around him a group of lawyers, media representatives and political assistants to address pressing issues.

Today, Trump's assistants and allies admit that “unflattering stories"On the Russian theme will be part of the daily topics. They also acknowledge that the White House was not well prepared for resolving such conflicts. Christopher Ruddy, Trump's longtime friend, even said that the White House "was caught" in all these "Russian stories." There was nothing, and the Trump administration did not believe that something like that could be unwound. But now there is a “catch-up game”. “At first, I thought the president was too worried about this,” said Ruddy. “However, it grows like a harmful fungus, and in fact there is really nothing.”

The theme of “perestroika” in the White House is exciting and "The Wall Street Journal". The reshuffles due to the “Russian” crisis are “expected steps” following the dismissal of the FBI director James Komi, the publication indicates.

A certain anonym, an employee of the White House, told reporters that the Trump team is giving priority to the domestic political situation, the president focused on this at “one hundred percent."

The source actually confirmed what they wrote to the Washington Post: it is likely that a special team of lawyers will check the president’s messages on social networks, and then decide whether they need editing or circumcision. One adviser to Trump frankly stated that it was time to create such a system that would not allow the stream of Trump's consciousness to “pour out into the universe” in the form of notes on Twitter.

Against Trump and his team, we add, is actively working the famous documentary director Michael Moore. The other day he opened on your website a page through which public informers will be able to freely transmit information about the administration of Donald Trump. The previously mentioned Moore, who considers himself a patriot of the United States, announced a plan to overthrow Trump by impeachment.

Not surprisingly, we note that in such circumstances, Mr. Trump and his team rushed to defend themselves by the proven methods of Bill Clinton. Accusations of ties with Russians will be more terrible than investigation of the president’s contacts with a trainee.

Observed and commented on Oleg Chuvakin
- especially for topwar.ru
Ctrl Enter
Noticed oshЫbku Highlight text and press. Ctrl + Enter
We are
Overseas ally? Donald Trump - US Presidential CandidateGeopolitical mosaic: Western journalists discovered Machiavelli in the service of Putin, and Obama was advised to take an example from Don Corleone
8 comments
Information
Dear reader, to leave comments on the publication, you must to register.